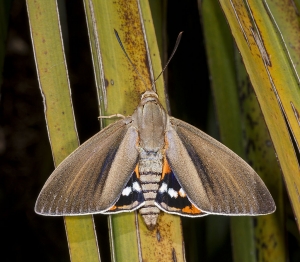 The future of palm trees in Perpignan centre, and around the region in general, is not looking rosy.

Infested by charançons rouges (Rhynchophorus ferrugineus) or red palm weevil, a whole sector of the department from Perpignan to the Vallespir area has been infected.

A crisis meeting, « Les palmiers, quel avenir?» was called iat the end of November 2015 to discuss ways of controlling the problem.

It seems that the palm trees are threatened by two different insects, often at the same time.

In 2004, the Roussillon coast saw attacks by the charançon rouge du palmier, and at the same time the Paysandisia archon moth was identified.

The charançon rouge was first spotted in Banyuls-sur-mer, Perpignan, Sainte-Marie and Toulouges. In Argelès-sur-mer, where there are around 2000 spécimens of the palm tree, 90 trees were infested in just one year. It is actually a species of beetle whose larvae can dig holes in the trunk of a palm trees up to a metre long, weakening and eventually killing the tree.

The Paysandisia  archon is a large moth, easily mistaken for a butterfly. It was accidentally introduced into Spain from South America in the 90s in a shipment of palm trees from Argentina, then on to Italy and France in the early 2000s. The moths can fly several kilometres and it is feared that without effective control, it will wipe out the palm tree.

In July 2010, the préfecture des Pyrénées-Orientales defined a « périmètre de lutte » in 130 communes. Since then, the mairies have been told to direct residents with infected trees toward specialists who are able to dispose of the trees in a way that will stop the disease spreading – for a price!