According to the pharmaceutical company MSD Santé Animale, the geographical areas “most exposed” to the risk of leishmaniasis, are the French Mediterranean, Italy, Greece, southern Catalonia, Spain, and even Africa.

With 40,000 cases declared each year in France, available treatments “slow the evolution of the disease but do not cure the dog”, which must have follow up by a vet for the rest of his/her life.

Discuss the best preventive measures for your dog with your vet. These include vaccination, tablet medication, monthly treatment with a recommended repellent insecticide – and keeping the dog indoors in the evening, when he or she is most vulnerable to these unpleasant little critters!

Do your own research too. Some of the suggested treatments may have dangerous or unpleasant side effects which you may not be prepared to risk. 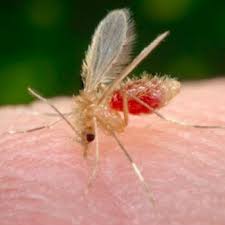 The ‘Phlebotomus’ or ‘sandfly’ is a small, hairy species of mosquito, straw coloured or brown, whose buzz is hardly noticeable but whose ‘bite’ can be fatal to dogs.

This unpleasant little beastie can carry and transmit leishmaniasis, (pronounced leash man eye a sis), a disease first recorded in the Pyrénées-Orientales in 1920.

There are various  medications on the market, (and it is important to to protect your dog against this from March to October in the P-O.

These villains are rarely seen during the day. Their favourite habitat is gardens, parks and woodland or any humid place. In fact, the name ‘sand fly’ is misleading as you will not find them on the beach!

As with the common mosquito, only the female bites. When she does so, parasites are deposited on the skin. A tiny skin lesion – called a chancre – appears at the site of the bite, usually in the muzzle or the ear. The parasite then invades the dog’s cells, spreads into the internal organs and can begin to damage the immune system.

Any dog can catch Leishmaniasis, although there is some evidence to indicate that larger dogs are more susceptible. No dog-to-human transmission has  been reported

Some vets used to recommend a once or twice yearly blood test to ensure that your dog is not infected but this is suggested less as more treatments become available.

Be sure to get the maximum amount of information from your vet first to make sure you are making the right treatment choice.

There is a vaccine, but it is still fairly new so long term side effects are not yet fully researched. Some vets will tell you that it is no more efficient than Scalibor collars and spot ons (Advantix and other makes),  flea treatments which both act to kill sandflies and help reduce the chance of dogs getting bitten.

Eventual symptoms may include ………

Symptoms can be quite vague initially, and the disease can really only be detected by a blood test. Eventual symptoms may be loss of hair around the eyes and nose, unusually fast nail growth, weight loss despite, continued good appetite, unexplained scabs on the body, dandruff, bald patches on the skin, conjunctivitis…

Be aware that there are advantages and disadvantages of several of these treatment, particularly the vaccine and the tablet medication. which have caused side effects for some dogs.

✌ Vaccine
✌ Tablet medication
✌ Advantix spot on
✌ Scalibor collars with deltamethrin from March to November. Ordinary flea/tick collars do not provide protection.
✌ Use anti-repellent soap to bath dog from May to Nov.
✌ Avoid wooded areas at dawn and dusk as these are peak activity times for the sandflies
✌ Keep well informed about the disease in order to give your dog the best protection you can. Research and treatment is evolving all the time.