70-year Old Walks Into His Own History Book 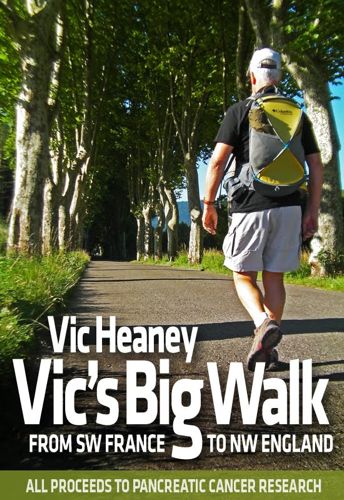 The answer was obvious. He would go for a walk. What? We have all been there, done that? But this was a walk with a difference. He would walk from his current home in the French Pyrenees to the house in Blackpool, Northern England, where he was born – a mere 2,000 kms or so. 5 years after starting to draw the old age pension.

To add a bit of spice, there would be a time limit. The start date would give him only 70 days to reach the objective, forcing him to walk 30 kms or so per day, with no scheduled rest days. Arrival time was scheduled for exactly 70 years, to the day, after his first arrival at that same address as a mewling infant.

To demonstrate that this was no self-indulgent jaunt undertaken purely for pleasure (??) he decided to use Vic’s Big Walk to raise funds for pancreatic cancer research. Vic’s first wife died from this worst of all cancers which is swift, savage and incurable. Unlike many cancers, no progress has been made in treatment, cure or survival rates during the past 40 years.

Intensive training over a 2-year period, followed by the walk itself, resulted in a total of 14,500 kms or over 17.5 MILLION steps being trodden during the project.

Most of the trek was undertaken alone but some days he enjoyed the company of others. He got to visit many parts of France previously unseen (by him) and learned first hand just how hilly France is, and how easy it is to get away from traffic and the hurly-burly of modern life.

He met many interesting people, unfailingly kind but including four who had no idea where the Pyrenees are, well exceeded his fund-raising target and, more importantly perhaps, had many conversations raising awareness of the evils of pancreatic cancer and its consequences.

The finish of Vic’s Big Walk was greeted by a crowd of well-wishers, press, radio and television coverage. BBC TV coverage can be seen by entering Vic’s name in YouTube search.

During his training period and the walk itself, the blog “Vic’s Big Walk” had many followers in every continent except Antarctica. Many readers of the blog demanded a book. A year after the finish of the walk, the book, also called “Vic’s Big Walk”, has been published, initially as an e-book in all major formats including Amazon Kindle, Apple iBooks, Sony Reader and Barnes and Noble Nook. It is hoped that a print version will follow in about 6 months time. All proceeds from the book go not to Vic, but direct to pancreatic cancer research.

The following link will take you to the page of Vic’s blog which will show where you can get your copy. If you don’t have a Kindle, never fear, because you can get a free download of Kindle software for your PC or most mobile electronic devices, then read the book there.

Get the book of Vic’s epic walk, relive the adventure with him, and help defeat pancreatic cancer as you read.