THE THINGS YOU SEE WHEN YOU HAVEN’T GOT YOUR NET!

June 1st, on a walk through the vineyards and orchards between Palau del Vidre and Laroque des Albères, I was about to cut a corner and cross a ditch between two vineyards. A woodchat shrike often hunts there for insects, small birds, mice and and lizards, but that day I decided to keep my eyes down and watch where I was putting my feet. It was hot; after all the rain we’d had the grass was very long and encroaching on the track. Perfect for snakes, I thought. 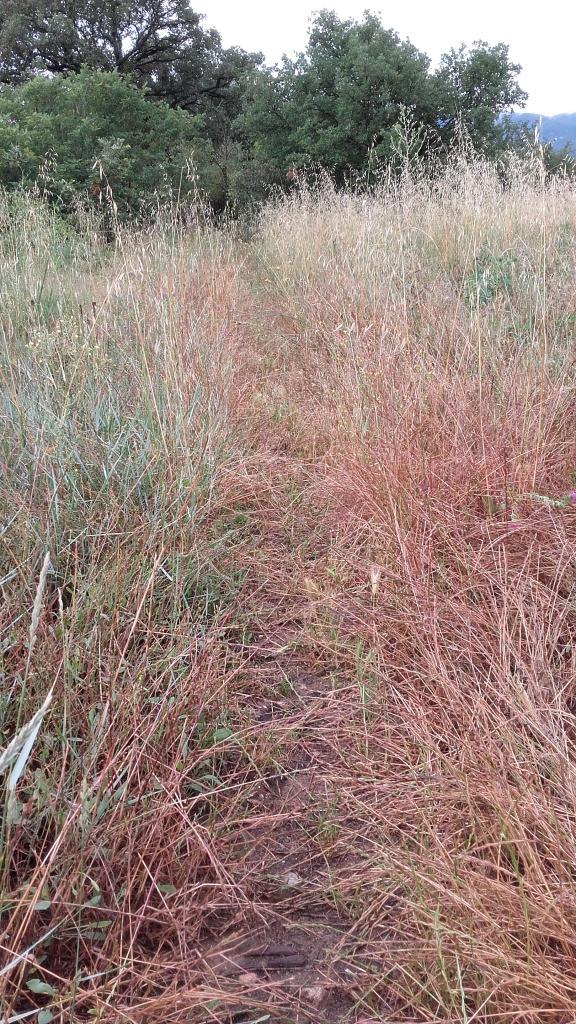 I kept my dog behind me. Which was a good move because, a few metres in, something small and dark was indeed approaching us along the track. Not slithering but walking. What on earth was it? Surely it couldn’t be … Could it?

Had I had too much sun?

It was, in fact, a crayfish – about the size of my hand. I stopped. It stopped. And when I bent to take a closer look, it tucked its tail under its body and reared up, claws poised to strike. 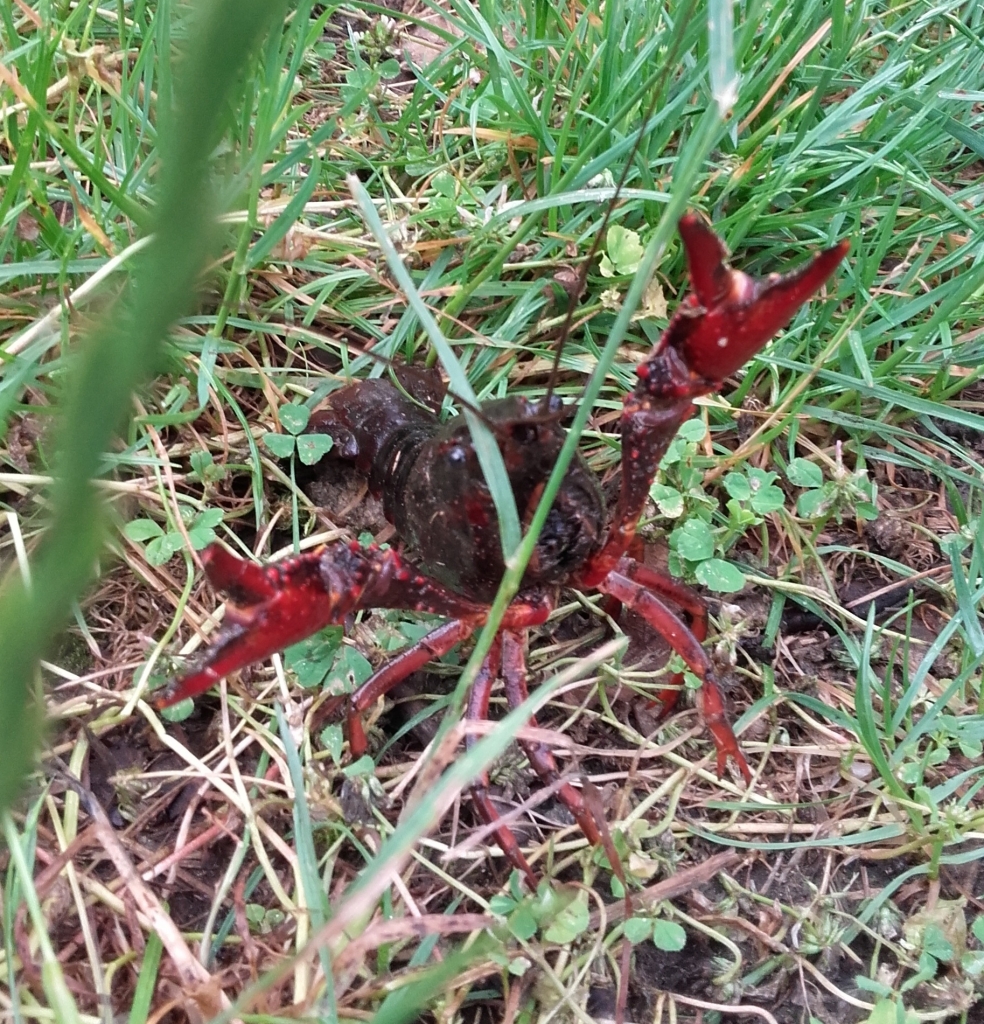 It maintained that defensive posture, stock-still unless I moved – at which point it would shuffle round too to remain facing me.

What on earth was a crayfish doing here, far from a river, or the nearest pond that must be half a kilometre behind it? A friend subsequently suggested it had been dropped by a predator. A heron perhaps? But surely in that case it would be injured and this one looked hale and hearty. So had it walked all the way from the pond? Why would it do that? And where was it going? In the direction it was headed, on the other side of the vineyard there was a decent-sized ditch with water that had neither drained nor dried up yet. But that wouldn’t be an ideal spot for it as the summer progressed. How long could it survive out of the water – would it make it that far in this temperature?

What to do? I decided – not least because I didn’t have any Kevlar gloves on me – to let nature take its course. And, as soon as we had stepped around it, it set off again too. I wished it luck.

But a few days later, in the grass close to the same track, my dog sniffed out the empty shell of a crayfish. Ants had probably dealt with all its soft parts. I now felt bad that I hadn’t tried to help it. Had it got tangled up in all those stems, and baked in the sun? Or had someone else’s dog killed it?

Days passed, more rain fell, and last Friday I was back in the vineyards. My dog regularly pauses to sniff the undergrowth – to check what’s passed this way, to add his mark, and frequently to snatch up and gulp down something foul or rotting. His find for that day, in the verge above a ditch between a nectarine plantation and vineyard, was – you guessed it – a dead crayfish. I’d stopped to watch swifts zoom past at eye-level, and was astonished when I next glanced down and saw a big red claw sticking out of his mouth.

Okay, so one might have been a fluke, but two? And this time we were even further from the pond. I wondered if rain brings them out, as it does snails, frogs and toads. There’s a big network of ditches around all the plantations. Do crayfish live in those as well as in ponds, lakes and rivers? Ditches that for many months of the year aren’t even damp?

Time to find out what was going on.

My dog’s breakfast was the same species as the one we found last time. It’s considered “invasive”. And its common English and French names (Red Swamp Crayfish/Écrevisse de Louisiane) give a clue as to why this is. Another example of human interference backfiring.

These Southeastern USA and Mexican crayfish were introduced into several European countries in an effort to replace diminished stocks of our own native species. But some escaped from farms (I picture them setting up a committee and tunnelling their way out), some were released from aquaria, and others will have been dispersed by birds such as herons.

I discovered that they survive long periods of drought by burrowing deep into riverbanks and ditches. They have a so-called stationary phase (when they only emerge from their burrows at night, to forage) and a wandering phase.

And in the breeding season the males go on marathon walkabouts. Aha!

One source quotes an individual walking 17 kilometres from his start point, in only four days! So perhaps the one I saw alive was a male and knew exactly what he was doing that day. Which shows that often it’s wiser not to intervene (even though in his case he wasn’t going to survive).

But I’d never seen crayfish there before, and couldn’t help feeling that the unusually wet conditions were contributing to their behaviour. When it rained yet again that night, I wanted to see if that would bring out more.

So yesterday morning I drove along the lane between Laroque and Sorède, with the busy voie rapide above and to my right, orchards and vineyards to my left. Slaloming around the snails, I’d not long passed a man unashamedly filling a carrier bag with nectarines, and was about a hundred metres from the pond, when I had to pull up for a crayfish crossing the road. It was heading for the ditch below the voie rapide.

Of course when I stopped he stopped.

What to do this time?

By now I knew that these foreign crayfish are having a significantly negative impact on our ecosystem. They can breed in their second year, and females can lay up to 600 eggs at a time. In warm regions like ours there may even be two breeding cycles in twelve months. Although resistant to crayfish plague themselves, they can transmit it to our native species – the rare White-clawed crayfish/Écrevisse à pattes blanches. And all that burrowing can cause river banks to collapse, and can reduce clarity of water bodies, which in turn encourages the growth of certain unwanted algae. They eat plants, macro-invertebrates (eg. snails and dragonfly larvae), juvenile fish and amphibians, and are implicated in the decline of some species of flora and fauna in some areas.

In view of all that, perhaps I should have run it over. But that was never going to happen (I struggle to not feel guilty about swatting mosquitoes!). And for it to be crushed by someone else’s car would hardly be a “natural” end either. Somehow, I’d have to get it off the road.

I’d forgotten my Kevlar gloves again, however. Couldn’t see a stick nearby. But any minute another vehicle would turn up, whose driver wouldn’t appreciate me blocking their way. I had to act fast.

Unfortunately this one was even bigger than the first one. And much more feisty, with scarily long arms and monstrous claws that lunged at me if I got anywhere near it. 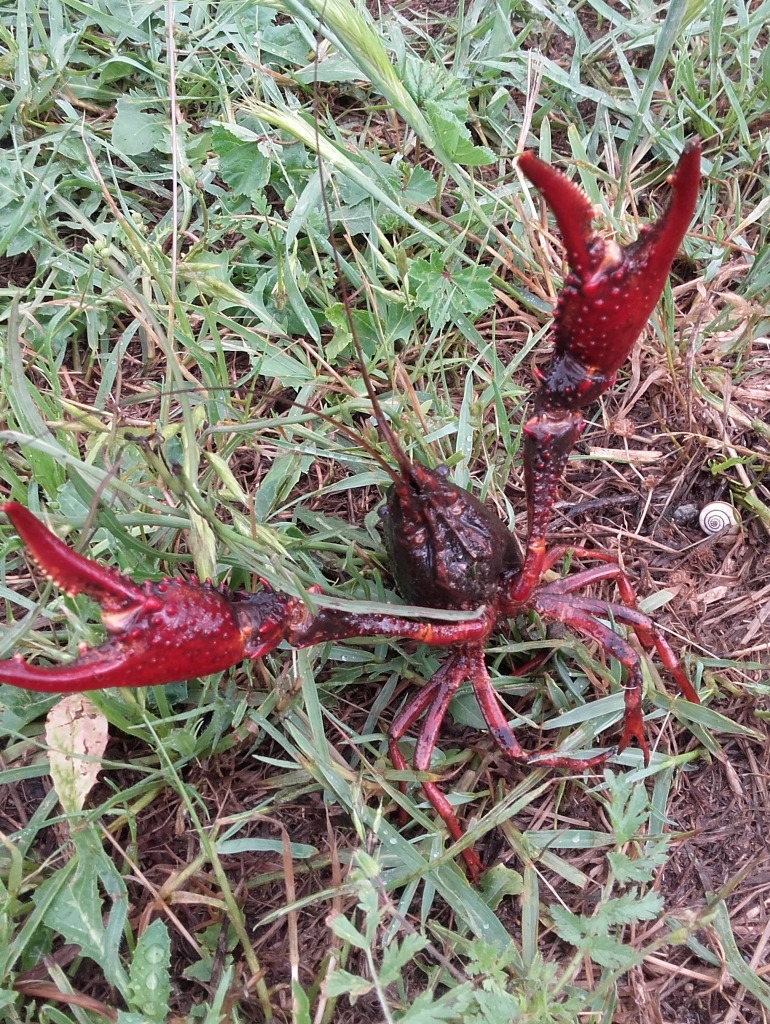 Perhaps if I picked him up by the end of his tail? Would he be able to bend his arms back over his head that far? He didn’t have to. That flexible body simply curled forwards, under and up, arms at full stretch to grab me from below. I let go. He resumed his Kung Fu posture.

This wasn’t going to work. I needed some kind of implement.

I drew out my mobile phone. The crayfish glared, daring me to make his day. I got the phone underneath him and half flicked, half pushed him a few inches across the tarmac. Claws windmilled. Another flick. He landed on his back. NOT happy. I helped him onto his feet and flicked again – into a puddle. No problem for him, but not a great idea to dip your phone into muddy water.

I scooped, cursed, scooped again, and at last he landed in the grass. By which time he was FURIOUS. But none the worse for his ordeal as far as I could tell. Nor, as it turned out, was my phone, for I managed to take the photo above and this short video. I walked behind him, hoping to film him following me round, like the other one had. But this fellow employed a different tactic to keep me at bay.

So does this tempt you to grab gloves and net (and carrier bag), to pick your own crayfish from the vineyards next time it rains? Well, I’ve read that enriched levels of heavy metals or pesticides in the organs of this species can be transferred to anything that consumes them (their natural predators being foxes, otters, herons, storks and some fish). Oh, and they can also pass on flatworms. Which makes them altogether less appetising, n’est-ce pas? Unless you’re my dog.

Lesley McLaren is one of several natural history enthusiasts whose blogs and photos can be found at www.mediterraneanpyrenees.com