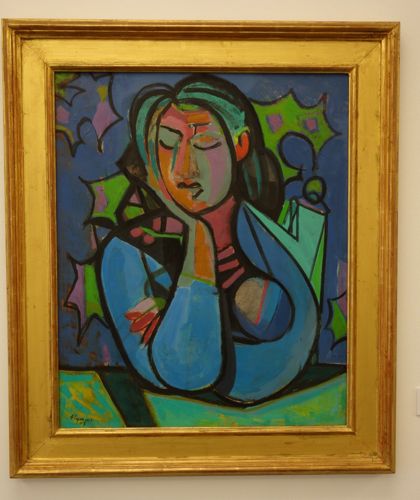 The drawings and paintings of Edouard Pignon, Femmes en Mediterranée, are on show at Collioure’s modern art museum from 1 June to 13 October. Pignon’s Women of the Mediterranean   were created during two short visits to the Catalan port in the summers of 1945 and 1946. 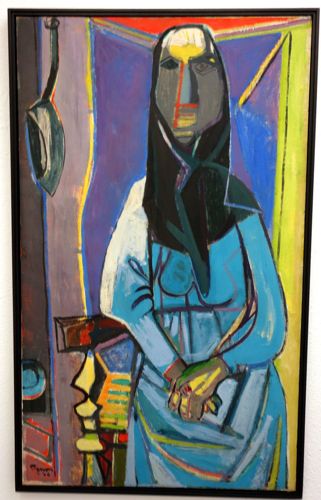 This was a particularly difficult period for the traditional fishing families, still suffering the ravages and deprivations of the war.  Pignon drew  these  careworn women, their heads and shoulders shrouded in black, with drooping cheeks and set mouths.  Expressionless eyes stare straight ahead or into the distance as if hoping for something better to come.

These postwar portraits depict “Catalanes” at work on the beach, the lines of their faces converging with the web of the fishing nets they repair.  At home, they sit erect in straight backed, wooden chairs, majestic and dignified, universal Madonnas of suffering.

A second series of paintings represents a contrast in class, as well as artistic treatment.  Pignon’s “Femmes Assises” are bourgeois women posed at ease in comfortable interiors.  The women are colourful, round and ripe, like the fruit displayed on their tables.

A multitude of pencil and ink sketches of boats and fishermen are witness to Pignon’s fascination with the bustle of activity and variety of tackle: masts, ropes, pulleys, baskets, sails, lamparos (lights used to attract fish to the surface), ladders, oars.

In these  studies Pignon captured the essential gestures of the figures and later in the studio he planned and painted his canvases.  Sixty key works from this period, including paintings, drawings and ceramics are on view in the summer exhibition.