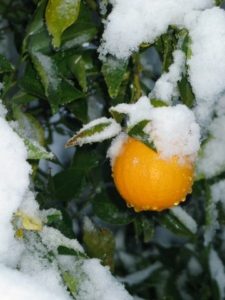 Orange trees, like all citrus, thrive around the Mediterranean and particularly here in the PO.

They are one of the most trouble-free fruits to grow. Our extended droughts don’t bother them, in fact, even with a young tree, the advice givenis ‘wait until you think they need water, then wait some more!’

A prolonged hard frost is the only serious threat, necessitating a rapid harvest, which you can juice and freeze, before the damaged fruits hit the ground, thaw out, and turn into mush.

The fruit ripens in the winter months, and on a summer evening, the pretty white blossom has an unmistakeable and exotic perfume, faintly reminiscent of marzipan, and Italian weddings.

Interesting to note that oranges, when grown in the tropics and places like South East Asia, where they originated, are not in fact orange but green. One unlikely but appealing account of the origins of the word marmalade is that it entered the English language via Mary Queen of Scots who became seasick on the boat over to France. As she was fed a mix of bitter oranges, she kept hearing the phrase ‘Ma’am est malade’, and so was born the name!

Only cool weather disperses the chlorophyl, turning them orange. They are a hybrid, thought to be a cross between a mandarin, citrus reticulata, and a pomelo, c.maxima.

There are no wild oranges; all the trees we know were cultivated from grafts.

Most commercial marmalade is made from the bitter, or Seville variety. However, the sweet orange makes a very good alternative, although some people feel it should correctly be called con ture d’oranges.‘Marmalade’ is derived from marmelada, a Portuguese word for a preserve made from quinces, but in European languages other than English, it has come to mean jam made fromany fruit. However, EU regulations state that only citrus-based products may be sold as ‘marmalade’. Confused?
The addition of some dried chillies in this recipe balances out the sweetness without adding too much heat. If you want it to taste like Christmas, add some cloves instead.