A couple of years ago, after seeing the Scottish Tapestry on display in Aberdeen, I had the idea of developing a tapestry reflecting the history of the town where I now live, Port-Vendres.

My husband and I first bought our home here some 28 years ago, and in the intervening period I have learned that it has a long, varied and wonderful history.

I first approached the Mayor and some of his elected members with the idea as I had no idea how to start the project. They were very supportive and have continued to be so.

Some of them gave us their time to advise us on how to start (being an innocent in French systems I found this very helpful) and one member has stayed as a member of our committee.

Eventually, I held a meeting with some of my friends and after this we managed to get a registered Association off the ground. 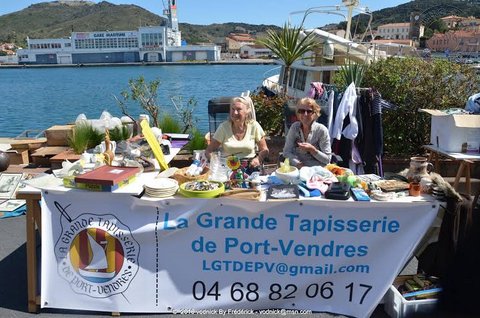 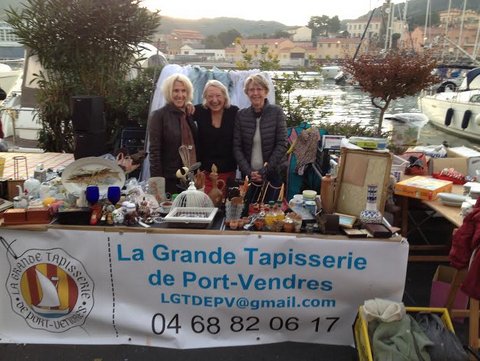 A friend of one of our members designed our logo, which I was able to use for business and membership cards. A list of ideas for the key points of our history was discussed, producing ideas for over 40 panels, which we soon recognised would be unlikely to be completed and we have since decided to aim to complete 20. 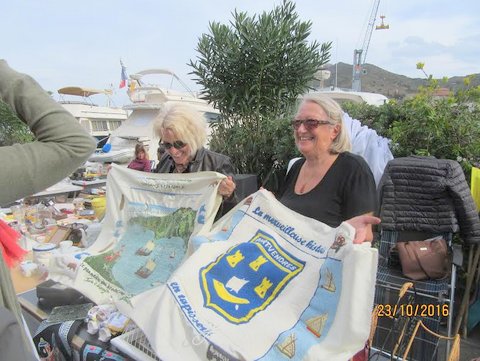 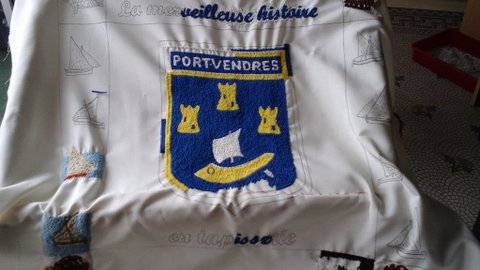 In order to be able to design a representation of each part of the history, we felt that each panel would need to be fairly large. Our initial idea was 1 metre square, but this was later changed to 70 cm square in order to give the most effective use of the base fabric we purchased.

We tried to enlist the help of local artists in designing the panels, but with little positive reaction, so in order to get the project off the ground I decided to develop the initial panel, which was simply based on the Town’s coat of arms. Having done this one, I have found that generally. I am able to put the designs for the rest together myself.

I have had the help of a friend, Linda, with one panel, reflecting the development of the main square (known as Obelisk Square or Place Obelisk) where I was stuck as to how to present the perspective. 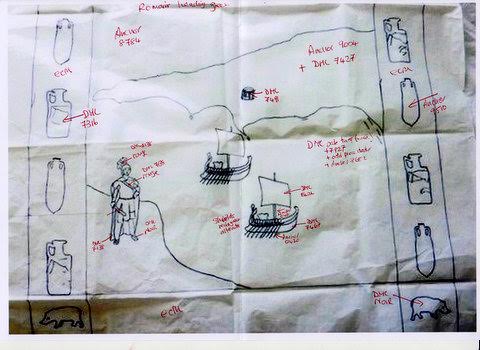 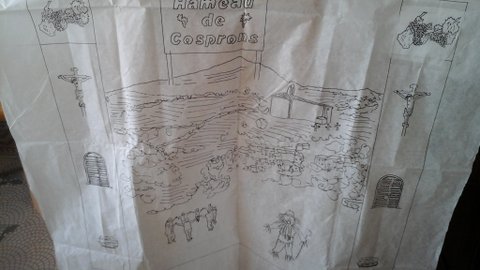 At present I am working on the design of the 10th panel.- Paulilles, the 11th – War!, and the 12th – In the beginning (the geology leading to the formation of our natural deep water port.

Another friend, Jacques Raup, has promised to design a further panel – the Retirada, once he has finished his exhibition next week in the Dome.

The panels are initially drawn onto tracing paper and then traced through onto the fabric base, using the light-box built by a French (male) member of the Association, Pierre Petit.

These fabric panels are then photographed and photocopied, so that the colours to be embroidered can be shown.

When a member agrees to take on the embroidery they are given the fabric panel, the photocopy and a bag of the appropriate colours of tapestry wool.

We have also bought needles, a selection of embroidery frames and magnifiers, for those who would like them.

So far four panels are being embroidered (two almost finished) and four other members have recently made a start on new ones. 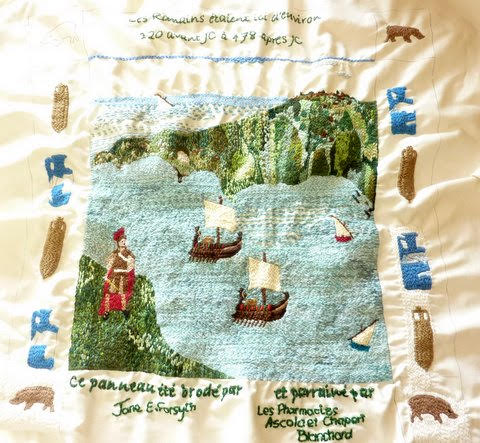 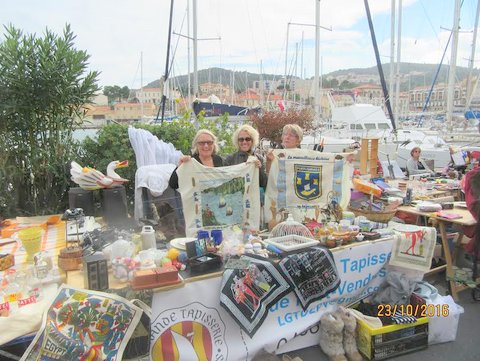 The apparent puckering seen in these pictures is not a problem as it gradually eases as the panels fill in.

The panels are large and take a lot of work, but no real skill is needed. We have started a sewing circle on Wednesday afternoons, which we hope will encourage people to join us so we can demonstrate how we do the sewing and we can have a sociable afternoon. Some may join us simply for this sociable occasion – or maybe make us a cup of tea or coffee?

Part of our journey in developing the tapestry has been to hold a public embroidery session in front of the tourist office (L’office de tourisme) in July. 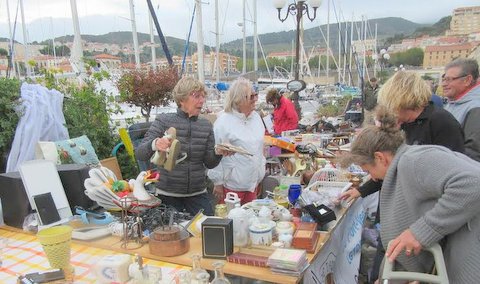 We have also presented our Association at two Association Fora (Forum des Associations) and joined in the Vide Greniers here in Port-Vendres, to raise funds for our wool purchases.

Once our tapestry panels are finished they will be mounted in wooden frames. We also want to develop a small booklet tracing the initial idea, the development and the design of each panel. This will need to be written in both English and French as the Mayor has told us he wants to put the whole tapestry on display as an interest for our visitors.

So, those of you reading this may be thinking of helping us? If so, please would you make contact and maybe join us next Wednesday afternoon? Thank you.
Jane Forsyth, President
Telephone: 0468820617 or e-mail:LGTDEPV@gmail.com