Shearing the goats and fixing the roof

Christmas 2008 was to be our second Christmas since moving to France and we were determined that it would not be a repeat of the previous year’s disaster (in brief: sandwiches, rain, Bournemouth).

Miraculously, both our son and our daughter managed to find their passports and made it out to Ceret. On Christmas Eve we caught the Little Yellow Train from Villefranche up to the hot springs at St Thomas-le-Bain. From the station it is a brisk 45 minute walk uphill to the spa, and after wallowing in the warm waters, we waited a little anxiously for the last train back, aware that if it didn’t come or we missed it, we would be spending Christmas on a mountainside in the middle of nowhere. Luckily, it did come and we rattled happily back down the valley. 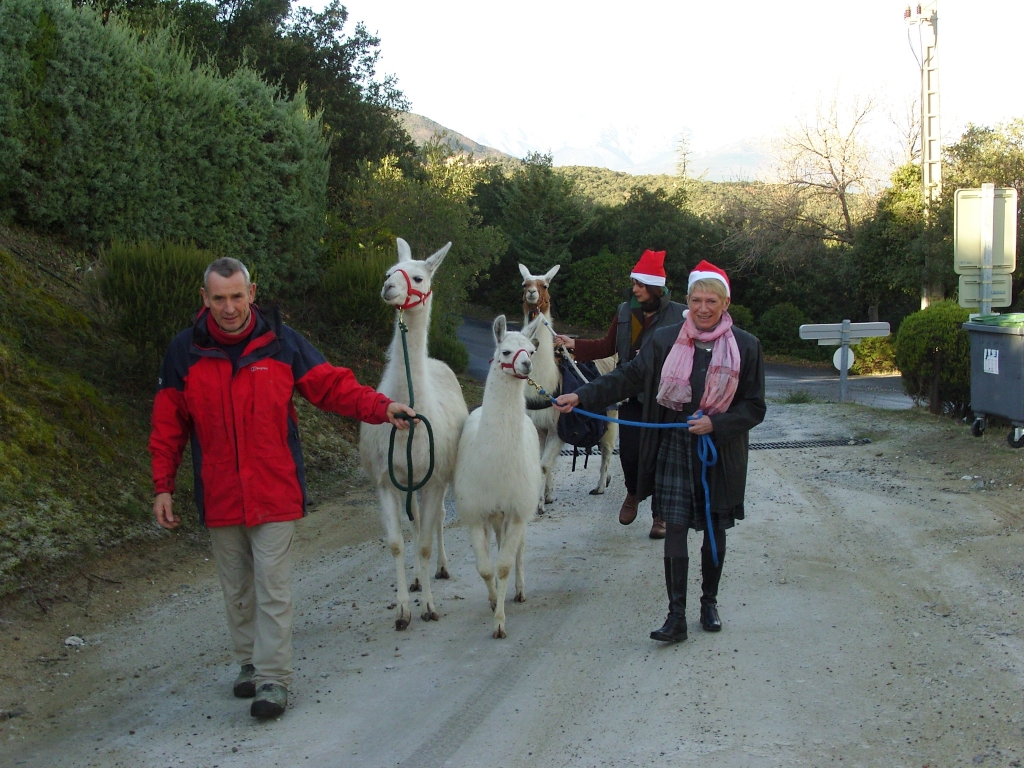 On Christmas Day we saddled up Perou with his posh panniers newly arrived from America and filled these with gifts for the local children. We walked the llamas along the local tracks and around the Hauts de Ceret, where various English and German families came out to greet us, thrilled to see the llamas.

A training manual had arrived from the States which we studied closely. Bill built a training pen in the field and one by one, we put the animals in. The idea behind this method is that llamas hate other llamas or people to come too close to them; they have a kind of invisible barrier, which defines their own private space.

The method involved walking slowly towards the animal, which would turn and walk away around the circular pen. As soon as it stopped the trainer too must stop and turn away. This is the animal’s reward. It soon learns to stop and let the trainer get closer and closer, and eventually put on the halter.

This sounds easy but in practice it took hours and hours, but at least it worked. After a few months I was able to catch all of the animals and take them out for walks.

There was only one mishap on one of these rambles. Someone — mentioning no names, hubby — let go of Opal’s lead. She was off like a shot, down the neighbour’s unfenced field and towards the woods. It took many, many hours with a bucket of food to lure her out of what she considered to be a lovely salad bowl. 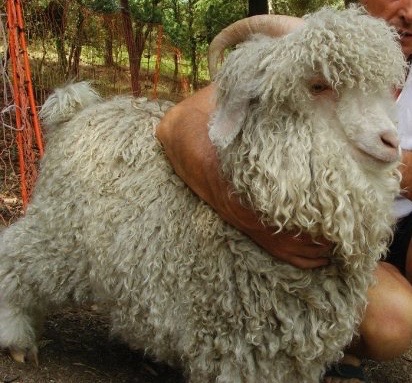 By spring it became apparent that our lady goats were pregnant, despite the fact that they had been quite nasty to poor little Billy, knocking him unconscious on many occasions.

One day in mid March I heard a higher-sounding bleat than usual. Rushing up to the field we saw a tiny bundle of white locks standing unsteadily on tiny feet. It was at this point that it dawned on us that we should have shorn the mothers before they gave birth. We were so worried that the new little scraps would be unable to find their way through the thicket of dense wool that we held them in place on the nipple until they’d had a good drink.

A set of shears was duly ordered and arrived – just like the ones for humans but five times bigger.

We were all very nervous when the first goat was placed on the shearing table. Sarah and I covered all the vital parts with our hands while Bill gingerly wielded the shears.

Unless you have seen an unshorn Angora goat at close quarters you would not believe how thick the fleece is, and it took Bill several hours to part the first one from her fleece. But by the time the last animal was done he had remembered old skills and five goats were feeling much cooler and looking a great deal thinner.

However, we were exhausted and totally stressed out. Now I had several beautiful fleeces for my spinning project, but I was struggling to make anything that remotely resembled yarn. And anyway, this endeavour came to an abrupt end when a friend came over for coffee. Her two little boys dismantled my wheel while our backs were turned and it never went back together again.

We came to love our little herd of goats. Each one had a name, and they became very tame.

They all had their own characters, and sometimes I laughed out loud to see them almost turn summersaults in the field. I never found out whether this was simply an expression of happiness or some kind of mating ritual, I prefer to think it was the former. But this charming exterior can be deceptive.

The goats were now sharing the field with about a dozen chickens. Bill constructed a wooden contraption whereby the chickens could get into it for their food but not the goats. At least, this was the theory. When placed in the field the goats surrounded it, heads cocked on one side while the cog wheels turned. When we returned, we would invariably find a goat lying on its back underneath the contraption, the chicken feeder empty. 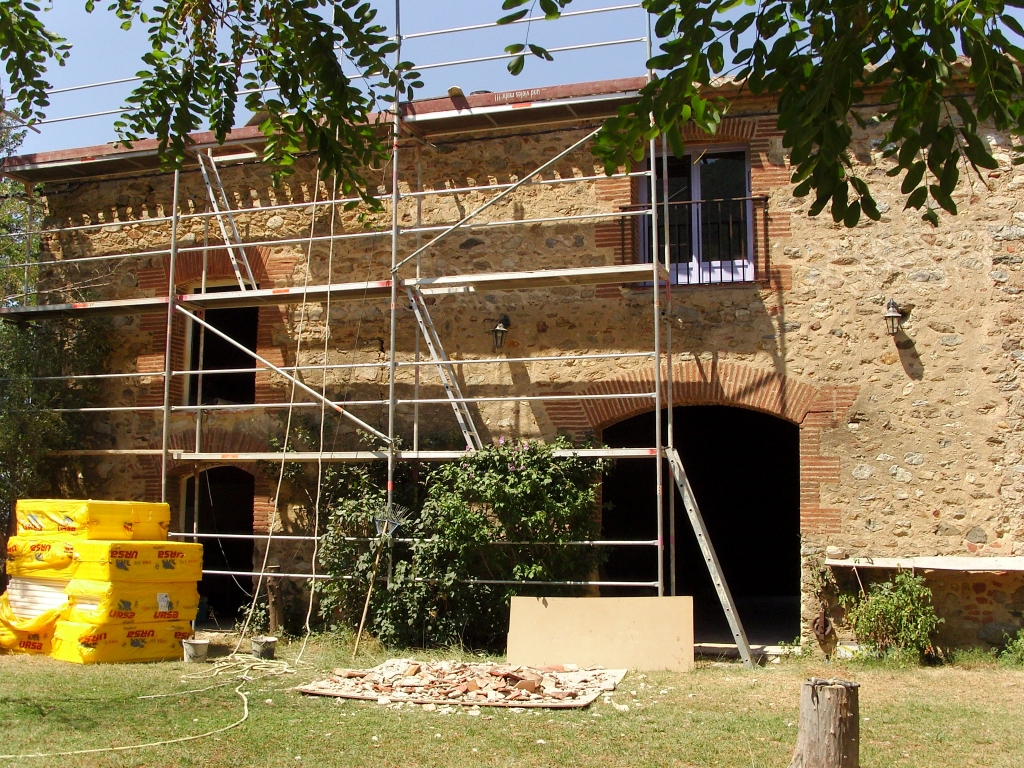 We decided it was high time to tackle the problems with the roof of the mas, which was letting in water when it rained. We contacted an English roofer called Howard Hussell, who worked with his son, Neil. Howard turned up to look the job over.

With his strong cockney accent and plentiful supply of fruity swear words, he was obviously a character. Howard lit a roll-up, screwed up his eyes and surveyed the roof. Despite looking as if he were 110 years old, he jumped nimbly onto the roof from the skylight in the attic room, and marched about, swearing profusely. It seemed he would do the job.

I soon learned the routine. Ten o’clock sharp I was required to appear on the lawn armed with English tea (Yorkshire), biscuits and/or doughnuts (English). Midday, ditto. 3.30 in the afternoon, ditto.

Sometimes I counted eight of us around the table, placed in the shade of the mimosa tree. As well as Howard and his crew there was Jason, who entertained us with his tales of derring-do and shenanigans in the local ex-pat community (unfortunately unrepeatable here).

Then there was Andrew, son of Winston Churchill’s rector, ex-lumberjack and teller of the most wonderful ghost stories. A gentle giant of a man, he was still handsome in his seventies and surprised me with his interest in yoga and reiki. He came to build two llama sheds for us. Who else? Oh yes, Eric the Robber.

We had recruited Eric to transform a pile of rubble into a terrace leading to the front door of the mas. He was a friendly, strapping man in his 30s who promised he would do a good job and we agreed to his rather high daily rate. You’ve guessed it — another mistake.

The patio took several months and had footings that would have done justice to Trump Towers. Eric could not often be spotted working, he was usually at lunch or talking animatedly on his phone.

High summer here in the PO is a very dry time, and what in spring is lush grassland, in summer becomes almost dry dust.

We found ourselves regularly driving to Cabanes in Spain to buy hay, but the quality is never up to that in the UK and often the animals would not eat it.

By the time August arrived we were desperate to find tasty morsels for our girls and Billy. During those hot August days, Andrew was busy building us a shed that we intended to use as a llama shelter. Over tea in the shade of the garden, we told him of our frustration in feeding the goats.

Andrew lived further up the valley, where the land was far more green and lush. His wife owned several shetland ponies and kept them on a large field near Corsavy. Andrew suggested we put the goats and some llamas in the same field and his wife would care for them at the same time as her ponies. After repairing the fencing, we released the goats and some of our llamas into their new home and thought (foolishly as it turned out) that our worries were over.