As arranged, the workers from the Mairie turned up in not one but two lorries.

With a great deal of good humour they sorted the rubbish into different recyclable materials, loaded up their vehicles, swept the lawn and bid us goodbye. All that without asking for a penny (more humble pie for hubby).

The barn was now empty apart from a large wooden wine vat, supported on a pile of bricks in the corner. Bill set a ladder against it, climbed up and peered in.

“It’s full of rubbish!” he exclaimed. “I’ll have to climb in and toss it all out.” I left Bill to his own devices while I tended to other jobs around the house.

Later, not having seen him for several hours I wondered where he was. Entering the barn I heard a muffled ‘help!” Where on earth was he? I stepped over the various objects littered around the barn floor and realised the cries were coming from the inside of the wine vat. Having tossed out the contents, he had no way of getting out himself and I told him how lucky he was that I had been there to rescue him from a wine vatty end. 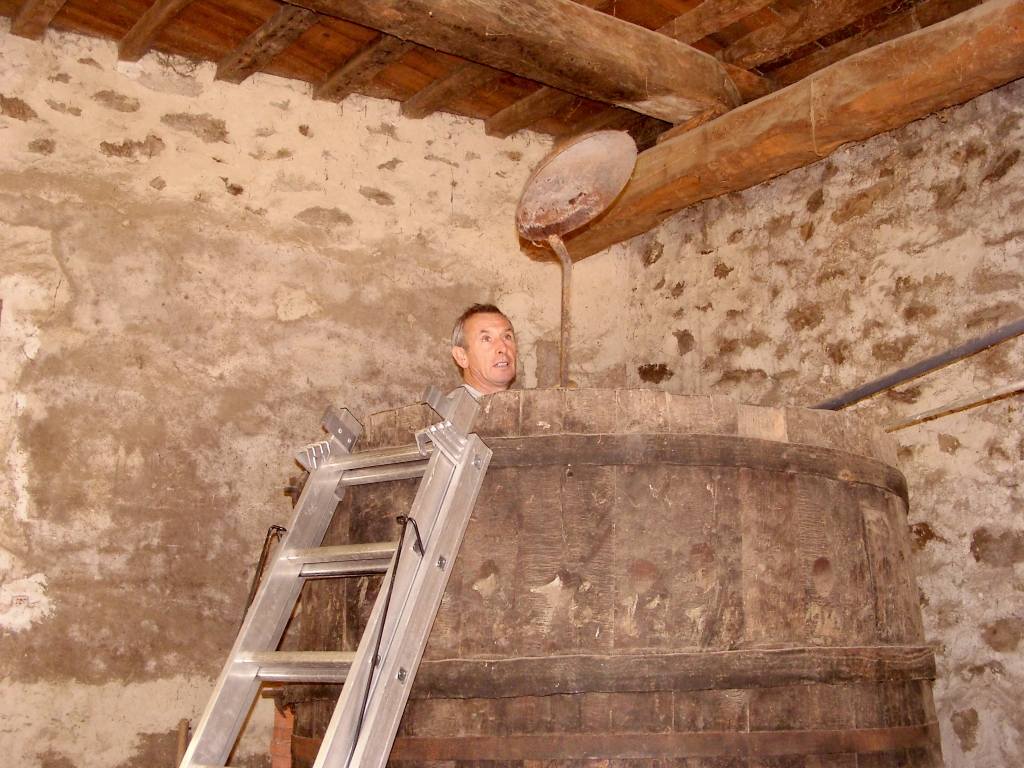 I was now two years into my yoga teacher training course and it was time to start teaching in a small way with guidance from my own teacher. Soon I had a group of three or four people who came regularly to Mas Pallagourdi for yoga. As the yoga-studio-to-be was still inaccessible and dangerous to walk around in, the classes were held in the lounge, with a fire burning in the grate to keep everyone warm. I found that I loved teaching and as classes went on I made many new friends, some of whom travelled from as far as Collioure to attend.

On a walk one day Bill and I came across our shepherdess neighbour, Jeanne, who was out in her field, cutting thistles with a scythe. Using a mixture of broken French and  body language we introduced ourselves to this delightful old lady. It was still winter and the snow on Canigou was sending some icy blasts in our direction. But Jeanne was dressed in only a thin smock, with no socks or tights, and pumps on her feet. I enquired after her health and she told me she had bad knees, pulling her smock to her waist to prove her point.

In her strong Catalan accent she explained that she still looked after a flock of sheep and that she had a son called Raymond. Ah, I thought. That’s good, now I know what to shout out when he drives past in his car or we bump into him at the market. (This went on for several years, it was only recently that I learned his name is not Raymond at all, but Alain.)

As we bid Jeanne goodbye, Bill tried to take her arm to help her up the steep slope. “Bah!” she said, or words to that effect in French. “I might be 85 years old but I can still climb hillsides!”

Now that the French family had moved out of The Other End and the rubbish had been taken away, we needed to work out exactly what we were going to do with this huge building. This is where Bill and I started to have different opinions.

Every few days we would wander around, paper and pencil in hand, arguing about how it was going to be used. I wanted to be able to accommodate as many people as possible in a basic, simple way. Suitable for yoga retreats, for example. Bill thought it would be better as a comfortable gite.

Bill got his way and eventually it became my turn to eat humble pie as it turned out he was right after all.

One of the first concerns was the electrics. Huge bundles of multi-coloured wires hung from holes in ceilings and walls. It didn’t look at all safe and so one of my yoga students gave me the name of an electrician.

Marcus was the first of three electricians we used at Mas Pallagourdi, and his was not a happy tale. As he lived some distance away we agreed that he would come for two days a week and stay the night with us. This was a giant mistake. Marcus was a very gloomy man, very much concerned with the terrible state of world politics. While the hubby and I were quite happy with our heads in a giant bubble, and liked to spend our evenings in a comfortable alcoholic haze, Marcus wanted to debate world affairs. Then he started on his life story, which made us even more depressed. As he worked around the house, I would often find him with his head in his hands, groaning, but I could never be sure whether this was a response to the huge balls of tangled red, green and blue wires, or the fact that his girlfriend had left him.