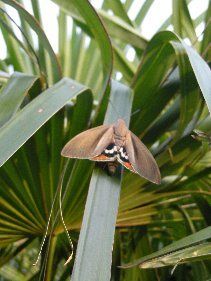 The article below originally appeared in our Local News section in August 2008. One of our readers, Anne, has since had the dubious pleasure of seeing these moths in action.
She tells us……

“This summer we saw 2 of these very pretty moths in our garden. In November we had to chop down 5 of our palm trees which had been infested.

It seems there is nothing that can be done for the moment to prevent this happening apart from netting the palm trees to stop the moths from attacking.”

The Paysandisia archon, a moth believed to have been 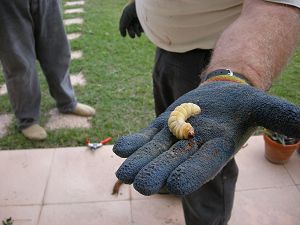 accidentally imported from Argentina and first reported on the north  Catalan coast in 2004, is responsible for munching through palm trees in Toulouges, and is gradually killing them. Palm trees have been chosen by many communes as attractive southern life ornaments to enhance village and town centres and replace the ‘platane’ or plane tree (although they are not proving to be completely suitable to the Catalan climate).

This beautiful moth, which can be easily mistaken for a butterfly, is large,with dark green front wings with brown streaking, and bright red back wings with bold black and white markings.. The adults fly from June 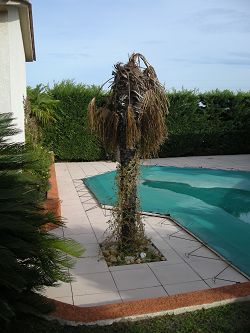 to September and these moths are causing increasing concern in Europe due to the sometimes fatal damage to exotic palms. In fact, since arriving in the south of France in the mid-1990s, the species has spread along the Mediterranean coast to Spain and Italy and it is likely to continue spreading without effective preventative measures.

Detection and control are difficult, as larvae cannot be seen or reached easily within the ‘stipe’. The larva bore through the stem or through the young leaves of the palm tree, until the palm becomes weak and can die from this. Unfortunately since this moth is not a pest in its native country, where its spread is limited by natural predators, no control method has yet been developed and it is believed that it could spread to a much larger region in the future if measures are not taken..