This is a project, first proposed in the 1980s, to install a double extra-high voltage line (400,000 volts each way) in the department of the Pyrénées-Orientales, leading into Spain.

In 1984, when Spain began taking steps to integrate into the European Community, an agreement was signed between France and Spain for the sale and supply of electricity to Spain by France.

The first proposals were to take the line through Basque country but public opposition and the presence of ETA forced the government to look for an alternative route.

The Val D’Aran was suggested but quicky abandoned because the line would end in a well-known ski- resort, Baqueira Everet, frequented by the Spanish royal family.

Other routes were studied, and the Vallée de Louron in the Hautes Pyrénées was put forward but later abandoned also as the area was classified as a nature reserve.

Opposition to the THT was growing and in 1997, France and Spain signed a new agreement, stating that the EDF (Electricité de France – France’s national electric power company) had failed to carry out sufficient research or inform the public adequately and they would now be obliged to pay an annual penalty of 60 million francs (around €9 million), for delays if no line had been built by January 1st 2007. This was an attempt to push the EDF to make decisions and move faster. 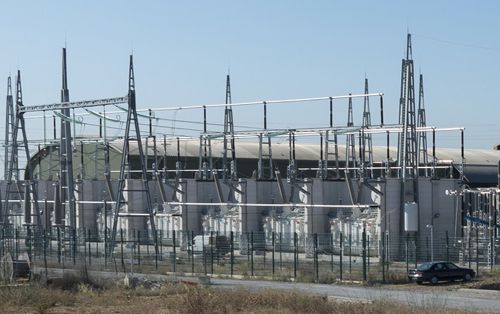 Later in the same year, both the Pyrénées Atlantiques and the Haute-Garonne refused to accept the project, supported by the departmental MPs and Lionel Jospin. Next, the Ariège flatly refused and attention turned to the Pyrénées-Orientales.

Opposition was strong and the association ’Non à la THT’ was formed. This collective provided a forum for debate and reflexion on the problems of extra-high voltage lines and to consider energy alternatives. Faced with determination by the RTE to continue with the proposal of the initial project for a double-circuit 400,000 volt line between Baixas and Bescano, and also aware of its intention to create another line further west in the Pyrénées, it was decided that action must now be taken and demonstrations were organised in the region, supported by thousands.

In 2009, the RTE (Réseau de Transport d’Electricité) announced that the decision had been taken to run the line underground – at a cost of 600 million euros as opposed to the 90 million if it had been installed above ground. The project was to receive European aid to the tune of 225 million euros. The line was planned to cross the P.O. underground between Baixas and the Albères following the TGV track, under a 6m90 strip which the public should not drive over, as a health and safety precaution.