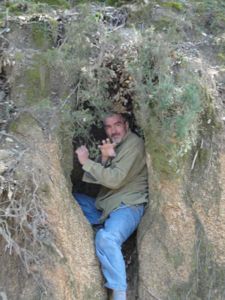 If you live on Rue des Escaliers in Maureillas then by definition your life functions on several levels.

It’s just the way houses turn out when they have to be built on an incline of thirty degrees. And living on several levels is a pretty good metaphor for Xavier Garcia’s life generally since he combines his passion as a beachcomber and an environmental sculptor with his day job as a builder.

Though having no formal training in art his street credentials nonetheless stand him in pretty good stead.

As an infant his parents moved the family from Barcelona to Paris – and not just any old part of Paris mind, but Montmartre no less. 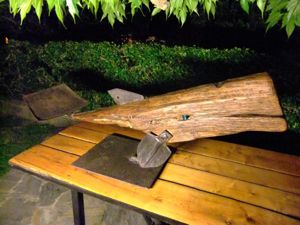 Xavier vividly recalls a childhood brought up in a quarter where poets and painters were on every corner and the atmosphere was heady with bohemian creativity.

For his raw materials Xavier scours the criques of the Cote Vermeille. A cache of his treasures sits in the garden of the Maureillas house he shares with his Norwegian psychotherapist partner, muse and saviour (his words) Eli Bakke.

It’s a wonderfully jumbled stockpile; a veritable elephant’s graveyard of bleached antlers and hairy, battered tree stumps that with the wind (or your imagination) in the right direction, delivers a sensuous waft of salt and seaweed. 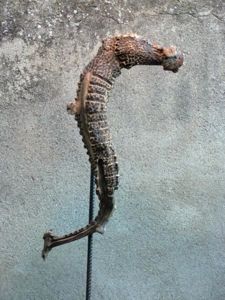 Of course any idiot can pick up a bit of beach flotsam and declare, “Behold! Art!”

Not long ago I proudly displayed a lump of wooden stalactites that if you squinted hard enough, I was briefly convinced, resembled the Sagrada Familia.

But Xavier has the touch. That ability to find, envision, transform – and he does so in a way that carries artistic integrity in spades. And in spades quite literally too, for with his piece La Baleine (The Whale,) Xavier seamlessly fuses old garden tools with washed-out timber capturing the true essence of this majestic sea mammal; its grandeur, grace and dignity shine through.

On the dark side, his La Gargouille (The Gargoyle) is pretty scary and I’d say his take on the Lochness Monster is more like the salivating beast from ‘Alien.’ 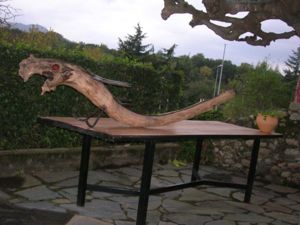 But there’s fun and drama too. His fish-themed, cartwheel clock that tells no time (Dali’esque or what?) is both bonkers and brilliant.

His elegant sea horse is sublime and his work in progress includes a fire-breathing dragon that looks set to tell of cacophonous, fire-cracker nights in Chinatown.

Xavier’s not a renaissance man, yet, but I’d say he has the makings of one. And anyone who hunts octopus with his bare hands after a hard day’s beach-combing earns my respect.

He explained to me in detail what you have to do, “First invert its head, avoiding the beak and suckers of course….” Er, you know what? I’ll stick to Calamares a la Romana at the tapas bar I think Xavier, if it’s all the same with you?

Xavier Garcia’s work can be viewed in his and Eli’s Maureillas garden. Email for a rendezvous at eli-joh@online.no