Catalan Country has long been home to passionate supporters of Rugby in both its forms, though Rugby à quinze (Union) has had a larger following than Rugby à treize (League).

But in recent years “treizistes” have made great strides in the Pyrénées-Orientales. So much so that in 2006 the Perpignan-based Dragons Catalans became the only non-UK side to play in the British Super League.

To Brits of “a certain age” the voice of Eddie Waring will always be associated with weekend television coverage of Rugby League. His Yorkshire vowels were a perfect accompaniment to this mainly North of England game, seemingly far removed from the altogether more gentlemanly Rugby Union of Bill McLaren.

The two codes split at the end of the 19th century, over different attitudes to payment of players. Rugby League, played with 13 men, developed mainly as a working class sport, while Union, with 15 players, maintained its amateur ethos and was considered a “toff’s” game. Rugby League has long suffered from a dour, gritty image, exemplified by the 1960’s film “This Sporting Life”.

But now a splash of Mediterranean colour has been added to the game, and a thousand or more British fans travel regularly to see the Dragons Catalans of Perpignan play the likes of Leeds, Hull, Warrington or Wigan in the highly competitive Super League. After joining the 14-team Super League in 2006, in 2007 the Dragons were runners-up to St. Helens in the Carnegie Challenge Cup knock-out competition, playing the final before more than 84,000 fans at London’s Wembley Stadium.

The “Dracs'” stadium, Gilbert Brutus, is currently being modernised and extended, with new offices, changing rooms, etc, and, more importantly, new stands to cater for up to 14,000 spectators. All these improvements are necessary because there is no system of automatic relegation and promotion in the Super League. Rather, Super League teams have a “franchise”, which carries with it an obligation to improve facilities, increase supporters, etc, as well as achieve sporting success. 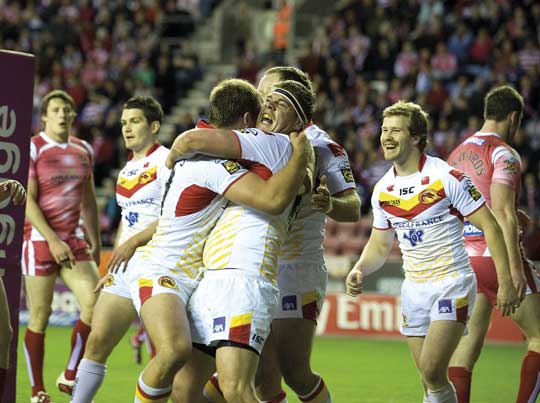 The Dragons’ season runs from February to early October, with 13 home and 13 away games, plus a game in the “Magic Weekend” which starts the season, as well as a knockout competition. All away games are in Great Britain, which means the Perpignan team have a gruelling travel schedule, with the “local derby” being the games against Harlequins of London! Only New Zealand teams who play in the mainly Australian National Rugby League are faced with a comparable problem.

However, one happy result of the time spent travelling together has been the creation of an exceptional team spirit within the 32 man squad – this esprit de corps being one of the main goals of the new trainer, Australian Trent Robinson.  With 14 changes to the squad this year, it was  important to integrate the new members as quickly as possible. Drawing mainly on a pool of indigenous French talent, the current squad has just 8 foreigners, with nearly half of the French players being Catalan.

After only 5 years playing in the Super League, the Dragons Catalans are looking forward with confidence to the future – bringing French flair into the toughest Rugby League competition in the Northern Hemisphere. 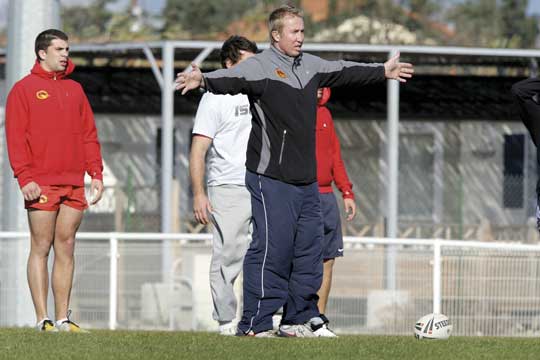 Alongside the huge changes taking place at their Gilbert Brutus stadium, the Dragons Catalans have also just introduced, as of September 2010, a new coach, the Australian Trent Robinson.

Like many other youngsters, Trent played football at school, but also developed a love for cricket and especially Rugby League, the sport of choice for most Australians not attending private schools. After university he became played Rugby League professionally for several years. While playing in the world’s most competitive competition, the Australian National Rugby League, Trent was tempted to France where he spent three years playing for Toulouse Olympique in the European second division competition. As Toulouse had an Australian coach, training was done in English, followed by translation into French, even though the majority of players were French!

In his fourth year at Toulouse, with no previous coaching experience, but only his university degree in Sports Science, he switched from playing to become the Toulouse head coach.

Trent’s love of all things French meant he had a hard decision to make when offered a place as assistant coach with one of Australia’s top clubs, the Sydney Roosters. However, he took a souvenir of France with him back to the Antipodes, in the form of his French partner Sandra, who presented him with their son Noah during their four-year spell in Australia. 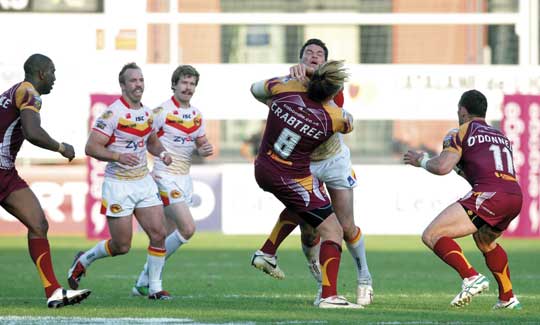 After helping to take the Roosters to the runners-up spot in the Australian 2010 Grand Final, Trent returned to the South of France to become the coach of the Dragons Catalans. Together with Sandra and Noah, he has just settled into Baho, a short drive from the stadium. In keeping with his passion for France, he and Sandra converse in French, but to ensure Noah becomes completely bilingual, he speaks to his son in English.

Trent is keen to “make a difference” to the game of Rugby League in France, which, although popular, is not as important as in Great Britain or Australia. In particular he wants to inspire youngsters, and as part of this aspiration, next season should see the beginnings of a Dragons Catalans  Under-20 squad in the Super League.

Whilst in Australia, the teams with which Trent was involved were themselves heavily engaged supporting charities. He recognises that there is a different attitude to charities in France, but as part of his desire to build close contacts with the local community, he would like to see the club involving itself more with this kind of activity.

With his obvious drive and love of the game, this young Francophile Ozzie seems sure to lead the Dracs confidently forward and bring some Mediterranean warmth into the Super League!