Sleeping in the yurt

It was a beautiful spring that year, with regular rainfall that kept the garden green. We had planted about 30 fruit trees and they were all full of blossom, as well as the wild cherries that we had discovered underneath all the bramble, and the wild plum trees that overhung the pond that hubby had created.

As it was not possible to get the tractor to this part of the garden he had excavated as much as was possible by hand and put down two layers of rubberised material. Although the pond was not deep it seemed to work quite well and someone we knew was giving away some goldfish from a pond that was due to be filled in. This seemed a very good idea as the fish would prevent it from becoming a mosquito breeding ground.

We collected almost three buckets of differently coloured goldfish including one fat one with a lovely long tail whom we christened Mr Guppy and we watched with satisfaction as they explored their new home.

The idea behind this project was to provide a water supply for the wildlife and eventually to run our grey water into it and use it for irrigating the garden.

After a lengthy period in the UK we returned to Ceret during a rare spell of wet weather. As I lugged our bags into the house hubby told me he would have a good look around. To his horror he saw that the rain had flooded the lawn and was rushing down like white water rapids towards the little pond. The water had penetrated between the two layers of rubber and made the top layer pop up like a balloon.

Fish were being catapulted willy-nilly out of the pond and into the gully by the side of the road where they were in danger of being swept down the hillside. We both jumped straight in, regardless of wet feet and legs and started trying to stomp around the pond to push the rubber layer down.

But just like a balloon, as one bit went down, another bit popped up. I’m sure our neighbours already thought we were quite mad (‘marginaux’ someone had said) but if any of them had gone past at that moment we must have looked like a couple of lunatics.

We  started sleeping in the yurt and found to our surprise that we preferred it to sleeping in the house. Coming back into the mas in the mornings the air felt heavy and stale compared with the lovely air around our trees and yurt.

However, the first night there was a massive thunderstorm which felt as if it was right above our heads. With every flash of lightning the yurt lit up, the struts showing through the canvas as if it had been in an X-ray machine. Now I knew why the instructions had said not to build a yurt underneath trees! I was frightened that lightning would strike the oak tree above us and send it crashing on top of our heads and wondered whether to make a run for it back to the house. But that meant braving a dark woodland in the teeming rain.

Remembering that an unfortunate English guy had been struck by lightning while out walking on Canigou only a few days previously I decided to stay put.

The following night we were woken by the fox barking at us, at very close quarters. We both went outside and shouted at it to go away, which it did eventually, barking all the while. Gyp the dog sat inside the yurt through the whole thing, his fox-chasing skills evidently having temporarily left him.

Our friend Jo stayed at the Rehabilitation Centre in Cerbere for several months while she worked hard to learn how to stand and to walk. At home, the house was modified so that she could move around it easily in her wheelchair and at last the day arrived when she was ‘released’ and allowed to come home.

It was difficult for everyone, not least her husband Arthur who, owing to his Parkinsons, also struggled to walk and move around. Helping her into bed at nights they often both ended up in a heap on the floor. One day I opened my front door to find Jimmy, Jo’s Spanish physiotherapist on the doorstep.

“Jo’s in tears,” he told me. “Some heartless person went collecting blackberries and took her some.”

“Ah,” I said guiltily. That someone had been me.

I had debated with myself whether to call in after collecting a bag of blackberries, to share them with Jo and perhaps enjoy a cup of tea. I wondered whether it might upset her, but thinking that Jo knew I had to walk Gyp every day, I was sure she would be fine. So I called in, shared the blackberries, drank my tea, and left. I was not to know that afterwards Jimmy would find her in floods of tears.

Along with most of the French population, before her stroke Jo had loved to find food growing wild – and free. I had often accompanied her to find wild mushrooms, figs, wild asparagus, and we had even inched our way down a mountainside on our hands and knees in order to collect wild strawberries. These Jo would make into delicious tarts that would have rivalled anything for sale in a Paris boulangerie.

In the early days of our friendship, during the cherry picking season I had told Jo what a shame it was that a field of cherry trees nearby had been harvested but that there were still many cherries left on the trees, apparently abandoned to the birds. 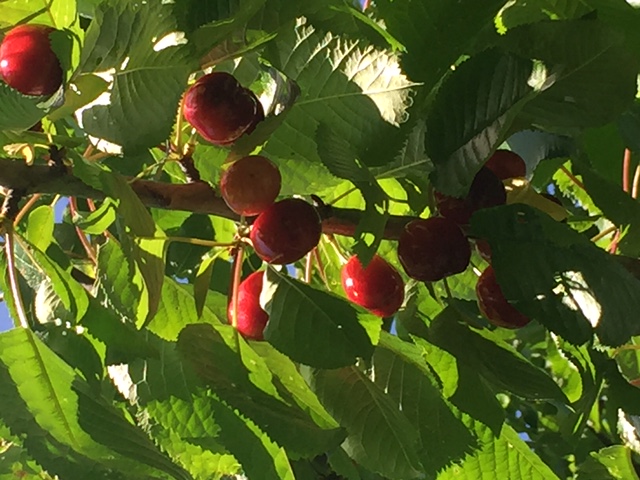 Jo’s eyes widened. “You know, there’s a law in France,” she said. “It decrees that after the harvest has been done the local people are entitled to forage for what’s left.”

I always have been gullible and of course I fell for it.

The next day we set out in Jo’s sports car and pulled up outside the field. With the confidence of the righteous I strode off and was soon half way up a cherry tree. The cherries were plump, black and oozing juice. They were utterly delicious.

Several trees later I was filling my second carrier bag when we were disturbed by loud shouty noises. The noises were coming from a very irate-looking man, who was striding across the field towards us.

“Get out of my field and get off my cherries,” the man was probably saying in Catalan.

Heads bowed in shame, we slinked off, leaving our bags of cherries behind. Since that day, every year at cherry time, the field is closed off with barbed wire fencing. So much for the Law of Universal Picking of Cherries — it doesn’t exist, or if it does, the Ceret farmers haven’t heard of it.

So, I was learning fast. Anything that reminded Jo of her previous life, whether that was playing petanque or collecting blackberries, was off limits, which unfortunately made our relationship increasingly difficult.