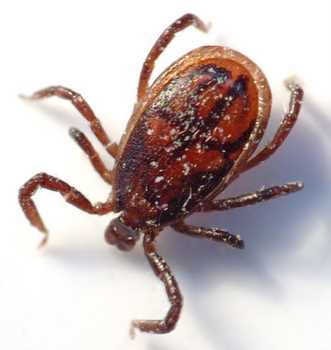 Ticks are not insects, but tiny blood sucking parasites which live in woodland and grassy areas, closely related to spiders.

They are often found in tall grass, where they will rest at the tip of a blade so as to attach themselves to a passing animal or human.

The tick will usually drop off the animal when full, but this may take several days. When feeding, ticks make a small hole in the dog’s skin, attach themselves, and insert piercing mouthparts that remove blood.

The presence of ticks is annoying to dogs and can lead to serious illnesses if not removed early.

Regular examination and grooming of pets (especially dogs) and frequent cleaning of their bedding is strongly recommended. Infested pet bedding should be carefully washed or disposed of.

The area around the pet bed should be carefully and thoroughly treated if the infestation is to be eliminated.

Ticks should be removed carefully and slowly. If the attached tick is broken, the mouthparts left in the skin may transmit disease or cause a secondary infection.

They should be grasped with tweezers at the point where their mouthparts enter the skin and pulled straight out with firm pressure.

You can buy special tick tweezers from most chemists.

A small amount of flesh should be seen attached to the mouthparts after the tick is removed. Do not squeeze the body of the tick or attempt to remove it through burning or chemicals.

If a tick is removed from a human, it is worth saving it in a sealed container in case they develop symptoms later.

You can avoid most tick bites on your dog by using a preventive product such as FrontLine. 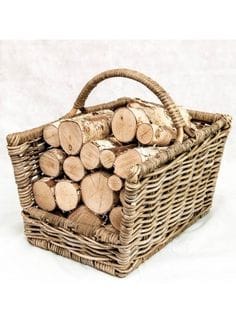 When the winter ended I decided I liked the rustic look of the log basket containing a few logs and so I kept it in my living space.

As the warmer weather came I began to notice tiny little bugs trundling around the floor, but I paid no attention to them!

One evening I was giving my very old dog a cuddle and as I did numerous bugs started falling from his fur onto my lap; closer inspection revealed that there were a number of them embedded in his ears and around his eyes – it was then I realised that he was infected with ticks.

Two nights in succession I sprayed his bed with a pesticide and the following mornings there were in excess of 30 dead ticks in and around his bed. At this point I felt slightly alarmed by the sheer quantity of them and began to search for the source.

I checked an opened bag of plaster (close to my dog’s bed) and as I unfolded the top a cascade of ticks flew out in all directions. Essentially these creatures had taken up residence next to a fast food outlet (my poor old dog).

By this point I was feeling more than a little paranoid. Quite by chance the log basket became the focus of my attention! I picked up a log and knocked it on the floor and an enormous quantity of ticks fell out.

It took a considerable time before my home was tick free. I found them in all sorts of strange place: in the folds of clean linen, between the pages of books, in drawers and cupboards. Apparently they are able to sense danger and can hide away until the danger has passed.

If a tick feeds on an infected host there is a real possibility that it will transfer the disease to its new host; diseases include Lyme disease, typhus, hemorrhagic fever and a form of encephalitis.”