Pyrenean Mountain Dogs in the Albères 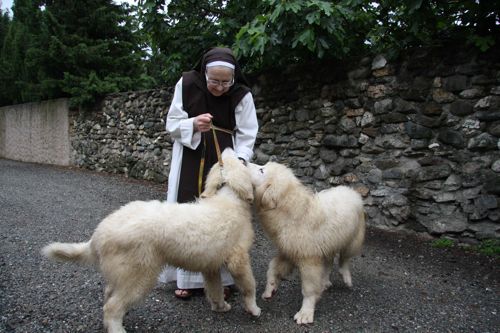 Sister Marie-Christine has a commanding presence for a woman her size. The petite nun, who resides at the Monastère des Ermites-de-Marie, is no stranger to dealing with giants. Along with her fellow sisters, Marie-Christine is world renowned for breeding Pyrenean Mountain Dogs. Reaching up to 70kg (154 lbs) in weight and 80cm (31.5 in) in height, they are among the largest canine breeds in the world. 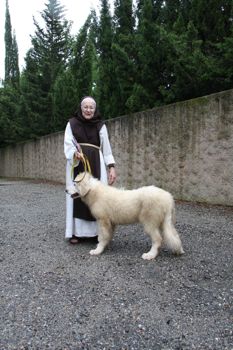 The sisters began breeding the dogs in the Hautes-Pyrénées in 1964, a foundation reflected in the breed’s name ‘De Gabizos’ after the Pic de Gabizos. They later relocated to their current residence close to the Spanish border town Le Perthus.

The dogs provide not only a source of income, but a sense of security. The monastery is isolated, tucked deep into the wooded folds of the Massif des Albères.  A seclusion Marie-Christine believes benefits the breeding.
“Here there is the calmness of the monastery, it is not stressful. It is regulated by the ring of the bells. The dogs wag their tails when the bells ring!”
The daily duties are shared between the sisters, with the Mother Superior helping in the morning and evening. Marie-Christine attends to the dogs during the day, often taking them for adventures in the mountains where they can “discover the world!”

Scratch the surface and you see the pleasure with which Marie-Christine speaks of her dogs. I get the impression they are old friends sharing a mutual respect and affection.
“The Pyrenean Mountain dog is a protection dog by nature, a keeper… It is very strong and its jaw is very strong….you have to understand that two of them can kill a bear! So it is important to know how to handle this breed of dog. On the other side, it is a dog that is faithful and loving and it is driven by affection…he protects the ones he loves. At my age I cannot hold them anymore. They are much too strong for me. So I control them with my affection.” The sisters used to exhibit their dogs, winning numerous prizes, but have since retired from competition. 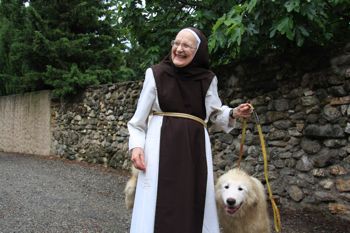 Equipped with a double-layered coat, double dew claws and admired for their tremendous strength, Pyrenean dogs were an essential asset to shepherds and farmers working on the high pastures. The breed was developed in the Pyrénées and, though estimates vary, most place their origins to around the 1400’s. Due to their regal appearance and stunning coat, the Pyreneans soon became popular in aristocratic circles and royal courts. Though Pyreneans are still widely used as livestock guardians, they have become popular as domestic companions, a role that has not always been in the dogs’ best interests.

As with all pedigree dogs, irresponsible breeding practices have lead to problems in the breed.  Marie-Christine insists that potential buyers must be careful when choosing where to buy a pup.
“In our ermitage we are careful about the pedigree, the ancestry and then we socialise the dogs, because it is important to socialise. We don’t breed many. The most we do is three litters a year. So, it is more humane. But if you have more than that then it is industrial and it is harder to take care of each pup specifically.”

Marie-Christine explains that people make the mistake of thinking that Pyreneans have a bad character. Instead, the breed is recognised for their stable character, their ability to make decisions and act independently. But, she emphasises that the Pyrenean dog is not for everyone. “They need a lot of space… and it is preferable not to have any close neighbours because they bark a lot at night. Some people can’t stand it and it can finish very badly with the neighbours! In the lotissement it is not possible, even if you have a big garden…and in an apartment, don’t even think about it!”

The monastery sells puppies for 950€, micro-chipped & vaccinated. You can find out more details by visiting: www.chien-des-france.com & www.monastic-euro.org or by contacting the Réunion des Amateurs de Chiens Pyrénéens (R.A.C.P.) www.chiens-des-pyrenees.com
These days with internet it is quite easy to find us, but even before the internet we were quite renowned. It is not very common for nuns to breed Pyrenean dogs!