World-renowned French whips made in Sorède

BY SUE MACDONALD AND ELAINE FRAZER-ROBINSON

It’s a little-known fact that a village in the Pyrénées Orientales is the ‘capital’ of the French whip! 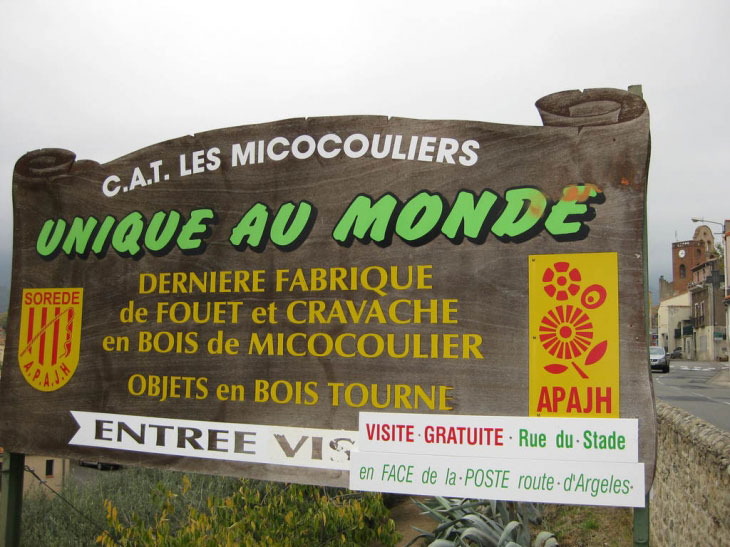 On the night of the winter full moon, a little known and unique tradition of cutting the hackberry (micocoulier) trees begins on the slopes of the Albères.

The trees are cut for the fabrication of world-renowned whips (fouets) and riding crops (cravaches) which are used by the equestrian population and circus trainers. 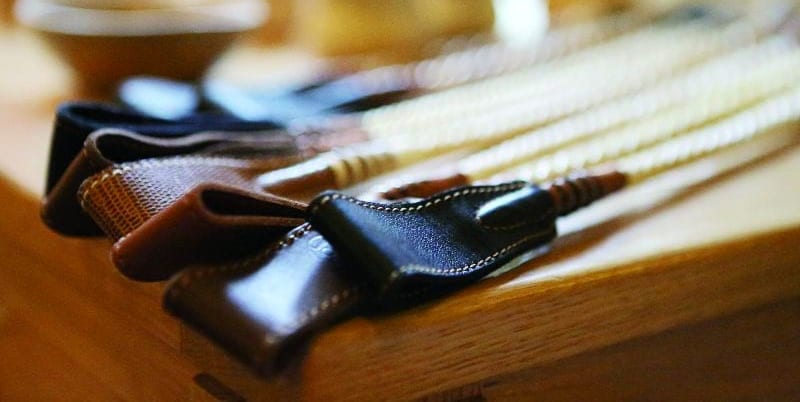 The trees, which are members of the elm family, have been cultivated around Sorède in the Pyrénées Orientales since the 13th century.

The Mediterranean climate is particularly conducive to the development of the hackberry tree, which likes its roots in dry, poor soil and its trunk in the warm Mediterranean sunshine.

Nestling at the foot of the Albères in a green and peaceful setting where the Pyrenean foothills plunge into the Mediterranean, a small village has achieved world-wide recognition for its quality craftsmanship. French whips made in Sorède have an international reputation among the equestrian and circus communities making this small village the unlikely ‘capital’ of the French whip. 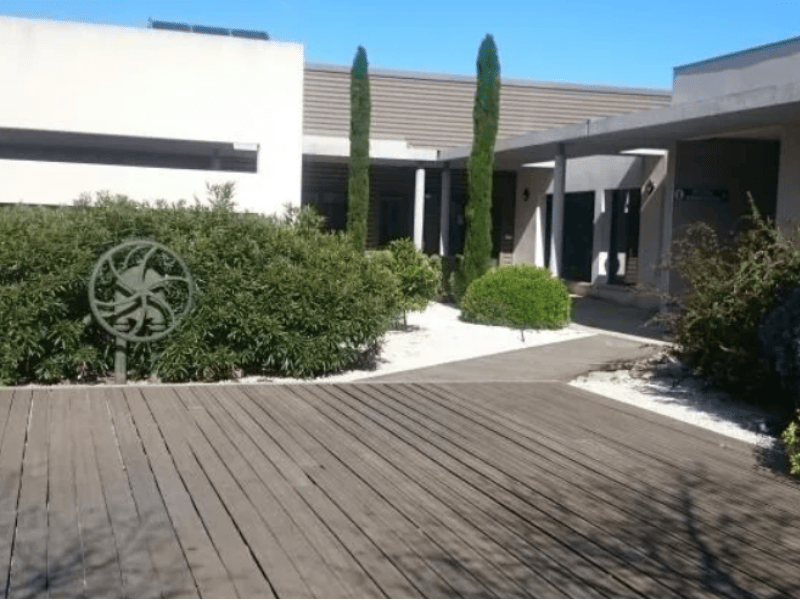 Since the 13th century, handcrafted whips (fouets), riding crops (cravaches) and various articles for equestrian sport, hunting and the circus are made from the unique wood of the famous hackberry tree, known locally as the micocoulier.

They are sold all over the world to prestigious clients including Hermès, Le Régiment de la Cavalerie de la Garde Républicaine, military equestrian schools, numerous circuses and the Disneyland Paris Resort. The craftsmanship that goes into the whips, which are said to last a lifetime, is fêted around the globe. 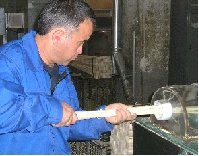 Production started in the 13th century and initially proved very profitable. However, over the centuries, plants and factories in the region closed one after the other, replaced by other activities including cigarette production.

By the late 1970s only a handful of craftsmen remained to keep the tradition alive.

Fortunately, in 1981 the CAT (Centre d’Aide pour le Travail), recognised the whips as an integral part of Catalan heritage and took up the cause. Three former craftsmen patiently passed on their ideas and knowledge, working  until they retired with the APAJH (Association pour Adultes et Jeunes Handicapés) to pass on the expertise of their forefathers and ensure the continuation of this ancient traditional activity.

Today ESAT (L’Establissement et Service d’Aide par le Travail) employs over 80 handicapped personnel in Sorède in a purpose-built factory which was constructed in 2008. The workers are enthusiastic about their role, which demands meticulous precision,  and take enormous pride in perpetuating this historic tradition.

Hackberry trees have grown naturally in the region of Sorède in the Pyrénées Orientales since the 13th century. They don’t like the frost but tolerate dry, poor soil and have the ability to adapt to the summer heat.

The trees are cut on the full moon, when there is a good north wind, which prevents the appearance of woodworm. The trees must grow to a minimum diameter of 20cm before they can be used, which takes around 15-20 years.

After felling they are dried for two years before being used in the manufacturing process.

The wood from the hackberry tree, often referred to as ‘Perpignan’ wood because of Sorède’s proximity to the city, is supple, flexible and durable and is used for a wide variety of products including walking sticks and tool handles. It can easily be braided which makes it the ideal material for making whips and riding crops.

ESAT de Sorède opened its doors in 1981 and accommodates over 80 people with recognised disabilities.

It is a medico-social institution which facilitates the social and professional integration of disabled adults and welcomes those whose ability to work does not allow them to gain employment in an ordinary environment.  With financial assistance from the state they also offer health and educational support to promote personal and social development.

The proposed work of these employees through ESAT is adapted according to their disabilities and ranges from maintenance and creation of green spaces, packaging and contract work, laundry and ironing and in Sorède the world recognised manufacture of premium quality hand-made whips and riding crops.

The production of a premium whip and a riding crop involves nearly 30 different intricate stages, depending on the product, and each whip or crop can take between 12 and 14 hours to produce.

The craftsmen still use a few old machines, some of which work with steam, in order to cut, shape, twist, (fascinating)!, weave, dry, sand, polish and varnish the wood before the hand-braided leather straps are added to make the finished product.

The longstanding reputation of the whips comes from the quality of the wood which boasts suppleness, flexibility and abeautiful yellow colour. The  braiding process cah produce a sleeve length of up to three metres – very handy for taming lions!!

And there is no waste! Every bit of wood is used. The off-cuts are handcrafted into unique and prestigious objects and trinkets including bracelets, bowls, candle holders and lamp bases which are sold in the factory shop.

A visit to the factory to see the famous Hackberry whips being made is a must!

A bilingual guide will enthusiastically explain the process and show you the secrets behind this incredible manufacturing tradition in a free tour. On our visit we were charmingly guided round by bilingual (French and English) Michel, a very competent and knowledgeable gentleman.

The tour starts with a fascinating short film showing the history of the tradition and the numerous stages of the process. The video is in French but it is quite easy to understand even if you are not great with the French language!

It then guides the visitor through the manufacturing process through the ages with photos and explanations, with a guide on hand to answer your questions. The tour then takes you through the existing process and large windows on to the workshop enable visitors to see the craftsmen and women at work. Wastage is kept to the absolute minimum as you will see for yourself when you reach the shop.

Who would have believed…

…that this world-renowned craftsmanship steeped in tradition and history is right here on our doorstep? It’s well worth a visit to the factory to see and experience for yourself how this master art has maintained its roots and progressed through history to become what it is today. It’s wonderful to see how truly proud the highly skilled master craftsmen are of their work and the part they play in producing these world renowned products in this small corner of France. 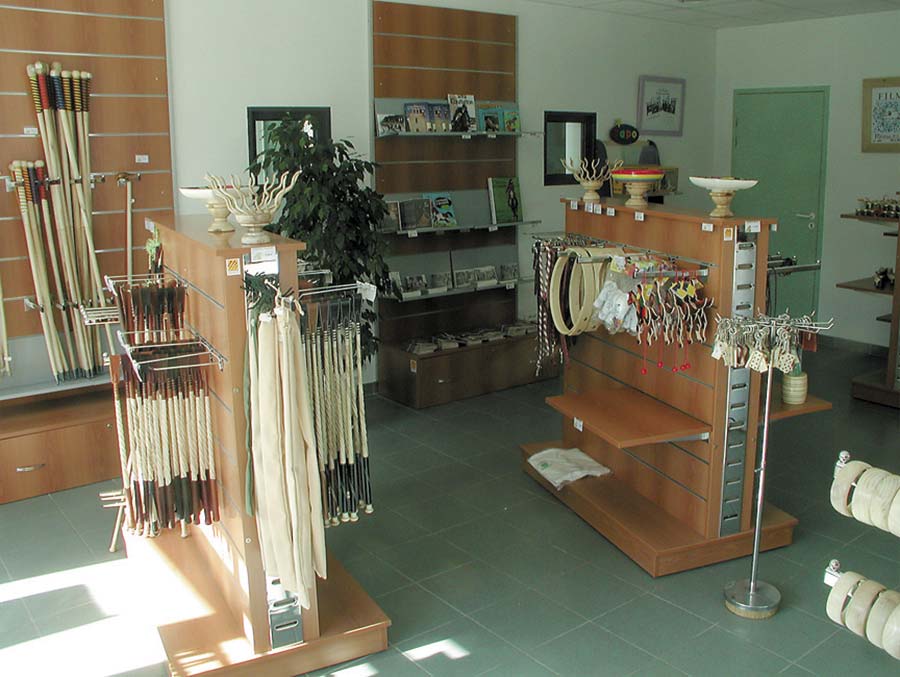 It’s a also truly amazing to see what ESAT has achieved in supporting the process and allowing it to evolve and provide meaningful employment to those who often find it difficult to find a job. The factory has become a wonderful asset to the local community and to France. a

NOW WITH A SHOWROOM IN ARGELES

Entre Fil et Bois can be found next door to Picard in Argelès. It is run by the ESAT Les MIcocouliers who are the whip makers in Sorede. At the shop there is a sewing room, where t bags of all shapes and sizes, purses, specs cases etc are made using the famous Toiles du Soleil striped Catalan fabric. Some of the larger items such as the beach bags have handles made of rope and micocoulier wood. You will find loads of lovely practical gift ideas in the shop! Please pop in if you are in the vicinity. ESAT MIcolcouliers employs handicapped people. The young man who served me gave me a warm welcome and spoke to me in perfect English. Sue C.