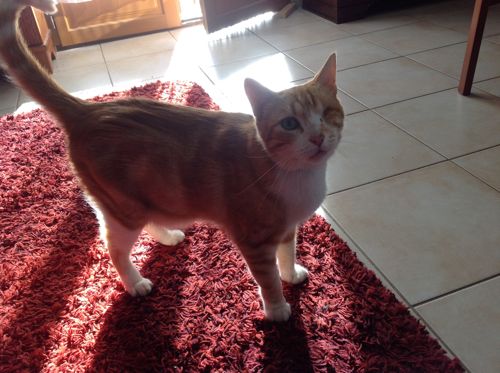 I don’t think there are too many of us who would argue with the conviction that having a pet is as much a must as having a chair to sit on.

Indeed, a chair needs to be shared with some little, pleasure-giving creature. In the past, I have enjoyed the company of various animals, many of whom found me.

Once it was a stray dog, once some fish – guppies – which were saved from a rapidly drying out Dhahran rain puddle. Mostly, though, cats find their way to our door.  I think we must have an aura which tells animals “this one is friendly”!

We now live in a small French village and the present cat-incumbent, who runs us so efficiently, is Bari. There is something rather special about a cat on one’s legs. I say ‘legs’ because Bari is not interested in my lap. He prefers that  I sit on the recliner so that he can drape himself mid-calf, tail hanging over the right leg, head resting on the left. To fix me, a possessive front paw holds my leg in place! John is the ‘brush-wallah’. Bari stands centre floor, back arched and expectant, with a look that says ‘brush’! Had he not lost an eye two years ago to a driver who did not understand ‘slow through a village’, we may not have been so indulgent …. but …. I doubt this!

In Jeddah, I once had a great mouser called Tiggy whose previous owners returned to the U.K. On the day he was to be delivered to us as a whole cat , he clashed with a car. Regardless, we took him on and found a local vet. For a while, Tiggy clumped around in Long John Silver style with splints supporting his damaged front leg, but it did not mend and his leg was removed. True to cat form, he adjusted and got on with life with a limp. To see him run was something else. He was so fluid you would not know that the leg was missing. One day, he jumped from a wall, landed on the non-existent leg, and fractured his jaw! For a long time he had a cage supporting his lower face!

Jeddah seemed to be a good place for cat accumulation. Unknown to us, a mother-cat gave birth on our patio and then left with most of her litter. My son heard a ‘mew’! Hastily, we unlocked the patio doors and discovered our “little present”! We called her Tuppence and she was reared on a pipette and a vampire tendency to suck on my arm causing suspicious looking bruises! She arrived just before Tiggy. As we know, things come in three’s. Coffee climbed a ten-foot, glass-embedded wall to reach us. Again, my son found her. She was covered in filth and unrecognizable as anything other than ‘some sort of animal’. Then she opened one blue eye. Gently, we washed away the dirt of this starving, jaundiced and very ill Siamese cat. The vet gave her a course of injections but the poor cat was so ill, she could not swallow. The pipette I had used for Tuppence became her sole means of nourishment. It took a few worrying days before Coffee could eat solids but she made it.

Bari – one eye half open – his two sisters – eyes closed – were found in a ditch in Taurinya by our French teacher. We took him home at four and a half weeks and bought a pipette. Now, six years later and a fussy eater, he is boss. We, of course, are willing slaves for what would we do without our therapeutic, furry companions!