The Tale of a Field 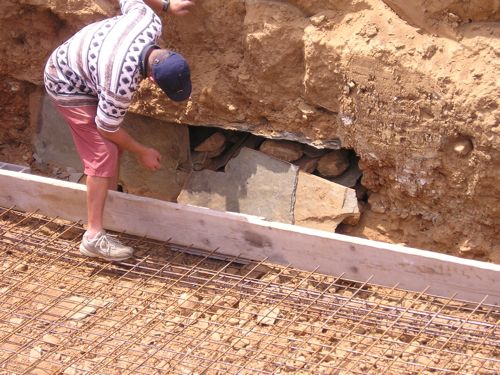 Each morning, when I open the green shutters of our bungalow, my eyes follow the upward line of hills until they rest on Canigou’s peak and I say to myself: “This is why I am here.”  As I stand in the shadowy garden, I turn and watch the rise of the quiet sun, see her delicate pink fingers stretch out to touch the foothills of this great mountain, and I am filled with utter contentment.  For me, this is a daily unique experience and the start of my day. There was a time, though, when I thought this would never happen.

About five years ago, John and I stood on a plot of land, part of a lotissement, which had once been a field of Apricot Trees.  An energetic estate agent was with us, showing us the marked out boundaries, knowing we were interested.  Tucked down behind us and just visible was the village, its presence declared by an ancient, soaring church spire; to our left and right, hills and escarpments rose, there was nothing to spoil our view, and directly in front of us, Canigou.

The plot we had been directed to was a good size but my eyes were drawn to a similar one opposite.  Swaying grasses seemed to beckon and I could not stop myself from walking towards it, sitting down amongst those tall grasses: “How much is this plot?” I asked, but I already knew that this was the one.

We went to a housing organisation, chose a bungalow and the build began.  With it, of course, came many unique experiences!  First and top of the list was the inevitable slow progress.  Every stage took twice as long as promised and in between the frustration of goals not achieved, came the ceasing of all progress due to the French summer break.

It made patience a difficult virtue.  Studiously, we practiced the Gallic shrug.  Other minor problems were soon revealed, the most important being that this was an historic village dating back to the tenth century.  Civic rules abounded.  Only certain colours were allowed for outside walls and shutters, the height of sheds and outdoor buildings mattered, the roof tiles had to be identical to other builds.  In fact, all the usual problems that arrive when one arrives in France.   If we made mistakes we paid the price of further delays.  Permission was denied or not given, forests of paperwork changed hands. 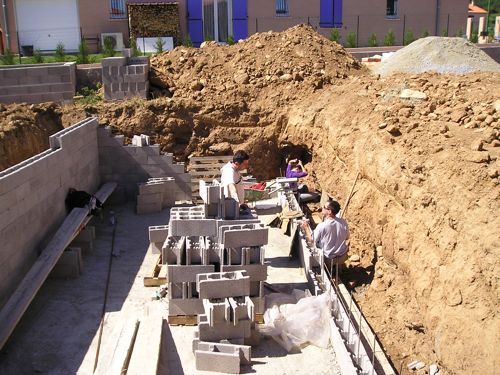 At last and more than a year since I squatted in my field, we moved in. At this stage the garden did not exist.  It was an uneven jumble of builders’ equipment, cement, discarded tools and monstrous weeds.  But there was space and my long-nurtured dream of having a swimming pool was a definite possibility.  And this is where my story really begins.

On a sunny Wednesday in late June, 2007, an earth-mover trundled in, positioned itself at the back of our home and began the noisy process of removing soil and stones from the marked-out pool area.  Every so often I took a look and was surprised both by the size of some of the stones being removed and the rigid, light stone layers left in what would be the side of the swimming pool.  They looked as if they were part of a wall, something I pointed out to John and certainly a puzzle.  What used to be there in those far-off days?

Meanwhile, the earth-mover went deeper and deeper.  John and I were in the house sticking kitchen tiles in place when there was a sudden silence.  Perhaps it was a tea-break?  But then there was a tap on the door.  The excavator stood there gesticulating towards the pool and I was not sure if he was either white from the dust or from a shock.  With a startled colleague immediately behind him, it pointed to the latter! 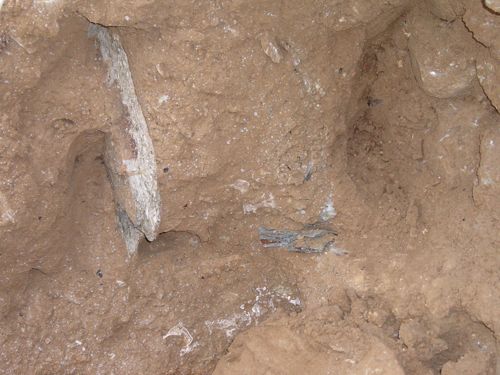 My first illogical thought was that a recent murder had taken place, perhaps by some previous owner of the old Apricot field, some dreadful, gruesome find on which I did not wish to look!

In trepidation, John and I walked to the edge of the newly dug chasm and it was at once clear that we were looking at part of an uncovered tomb with an ivory shape inside.  Quite clear also was the fact that we were looking at something that was neither of modern times nor recent violence.  This uncovered grave was very old indeed and at least two and a half metres below the surface.  The object the workers had found, the ivory still resting inside the opening, was a thigh bone.

As can be imagined, this was one mother of a discovery, a unique experience indeed, and we did not know what to do.  The first step, we decided, was to consult Valérie, a geography teacher and our neighbour.  This was her day off.  She came immediately, took one look at the slate tomb, proclaimed “Fifth century”, and I saw my swimming pool diminish into the never-to-be realised realms of a pipe-dream!

We covered the gap in the slate grave as best we could and began to panic.  What would happen to our garden?  Admittedly there was nothing much in it at that moment in time but the thought of an archaeological dig as the centrepiece of our ground was not exactly exhilarating.  What would happen to us, to our new home?  Would we be evicted in the name of historical heritage?

Another amazement was how quickly the word spread.  In no time, the mayor and our village handyman arrived, asked to look and asked us to take photographs.  A few days later an archaeologist, a very excited Monsieur Odiot, turned up with his team of two young students.  Carefully, they prepared the area and dug, sifted and brushed at the remains.  In fascination, we watched a very large man take shape, become reunited with his leg and gently removed from his resting place.

Already the phenomenon was beginning to draw attention so an immediate meeting to be held in the Salle de Fête was convened by the mayor.  The ‘find’ needed to be explained.  Monsieur Odiot took the floor and confirmed that our garden and beyond it housed the graves of a Germanic people called Visigoths.  A small history of these people followed and Valérie was right, they were from somewhere between the fifth and seventh Century. 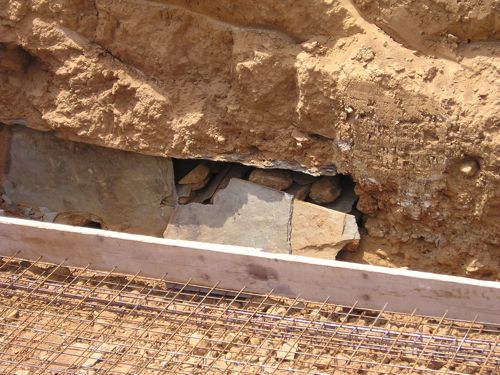 Unfortunately our french was not of a good enough standard to understand all but later, a quick look in Wikipedia enlightened us on the Visigothic kingdom formed when the Romans lost control of their empire.  The evidence in our garden showed that the characteristic slate graves were stacked one of top of another in a criss-cross design typical of the time and of early Christian burial.  He reckoned there were twenty or more in our garden alone and perhaps two hundred overall.  The meeting was then declared over and all those present then walked back to our house to view the site.  How unreal was that!  All these folk standing around the perimeter of our house staring in amazement at the hole in our ground.

At the end of the day Monsieur Odiot took some of the slate and the one whole skeleton with him for carbon-dating.  He promised that in good time he would let us know the exact history of these people but regrettably, this information has yet to come back to us.  Before our Archaeologist left, I shakily asked if we would have to leave our house, or at least turn our garden over to an Archaeological dig.  He sadly smiled and admitted to us that there were insufficient funds.  We were advised to cover up the hole and finish the pool as quickly as possible as it would not take long for opportunist treasure hunters to hear of it!  At once a vision came into my head of creeping figures in the night!

Then, he and the slate and the skeleton were gone and all that remained were the remnants of our unique experience plus a hole to fill!  We heaved a sigh of relief.  It would seem that our plans were still on course and this was good news but I was also glad for the Visigoths.  I felt that it would have been wrong to unearth and remove these ancient people.  This was their consecrated resting place and here they should stay.

However, some mark of the occasion was needed, some small ceremony. Thus to honour this special occasion, we gathered together our friends and gave a small oblation to show respect for those Visigoths who sleep beneath our feet.  We then asked their forgiveness for rudely interrupting their rest.  Later and as a memorial, we made a slate stool from the remnants found among the rubble in our garden. The swimming pool project went ahead.

Over the years our garden and our pool have taken shape.  Established  lawns, trees and flowers surround a swimming area we once thought would never happen.  These past three summers and convinced that we have their approval, we have swum in the company of generous and benevolent ancestors.  When I look out of my window, when  my eyes are drawn to the slate stool which marks a direct line towards ancient Canigou, I am awed with the thought that once Visigoths looked in wonder on that mountain.