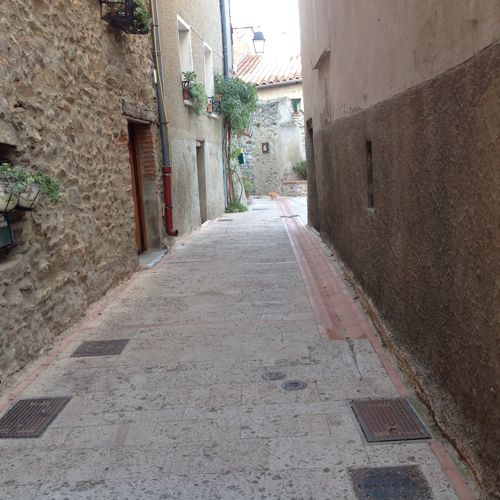 The small villlage of Espira de Conflent  nestles in the lower hills of Canigou.  Travel from Perpignan on the N116, seven kilometers from Prades, and  take a left turn onto a winding ‘D’ road which snakes gently upwards for five kilometers.

Cross two small stone-built bridges which  straddle the River Llech, past fields of peach and cherry trees; vineyards too.  Just after the first little bridge, there is a fork. Go straight on and you arrive in Finestret. Turn right for Espira, and now a church spire, standing proud above the tall trees, indicates that the village exists.

Walls of what was once a castle, come into view.  Before you cross the bridge and make this turn however, it is worth looking out for three ancient olive trees on the right,  gnarled, well cared for trees with huge trunks. Their thick yearly foliage does not give any clues but surely they must go back eons, perhaps to biblical times. 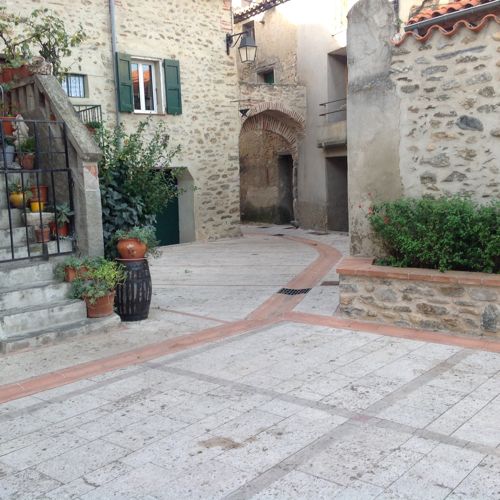 Back on route,  cross the second little bridge into a corkscrew of bends, before arriving at the Station of the Cross and taking a right into the village. To the left one enters another village called Lavall but I suspect that once,  before the road separated them, they were one.

The history of the village is long. Once upon a time Visigoths came and settled.  It would have been a perfect place,  near enough to a river but higher up; a fertile land at the foot of majestic Canigou.

During the centuries, there were hostilities and violence, battles between the church and the lay peoples, diseases such as cholera.

Today, it is a small, high walled village of paved narrow lanes, ancient arches and homes jostling together.  All the lanes open out into the main square.

Here is the heart of it, a small, welcoming twelfth century church called Saint Marie. Its marble interior, its statues and relics are not over ornate. Perhaps 100 worshippers might squeeze into the pews.  Indeed, for a long time, the village populace may not have been much more than this. 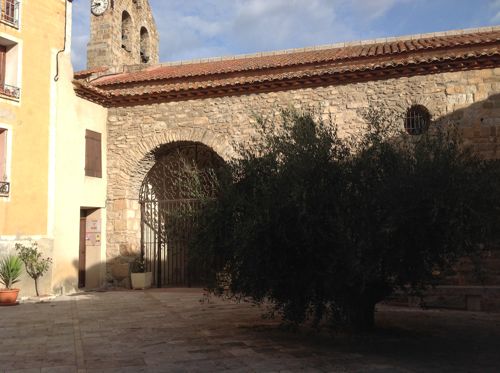 Also in this central square is La Patrimoine.  This houses a memorial of more ancient times.  In the Entrance Hall is a deep pit and one looks down on a burial place, a Sarcophage, dating back to the Visigoths.  Two people were found here, two skeletons side by side which have been dated between 679 – 937 AD. Were these Visigoth heros, dying to save their village from incoming Saracens? By 811 AD the Franks took back Roussillon.  Did our skeletal Visigoths die in this battle?

In La Place stands another Olive Tree.  This is not as old as the three en route but old enough to be a memorial of past violence, of a history of religious wars, of survival.

It is time to return to the present, though, and to realise that an ancient motto of those far off days still applies “Paix i Treve”. 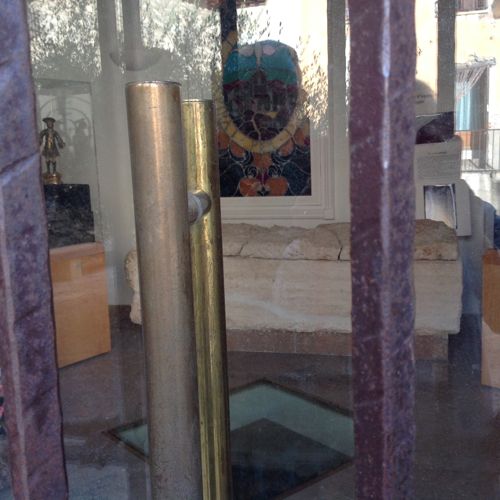 Once again, the folk of Espira are gathering.  It is a special day. It is 11th November. We meet at the entrance to the village, just in front of the fountain. Three boys are to carry the wreath. Before them, leading us to the Cemetery, is our mayor. Behind him are the veterans. One is a man of Welsh origins. He is in his late eighties and medals are proudly displayed on his chest. He stands beside similarly adorned French veterans. Behind them, a huddle of villagers of all ages, amongst them babies in pushchairs, a sprinkling of teenagers.

Slowly, respectfully, we begin our walk to the cemetery; we pass through its gates; pass the sepulchral homes of the dead. Slowly, we file down an avenue of trees. Ahead of us and at the centre of the graves and mausoleums, stands the War Memorial. There are not so many of us that we cannot comfortably stand round. 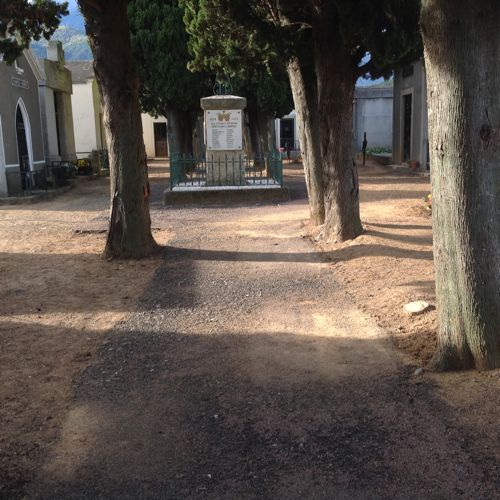 The boys pass the wreath to two of the Veterans who carefully and rather creakily lay it against the Memorial. A silence, our heads are bowed, a prayer from the Mayor. In turn the boys read out the list of the fallen sons of the Great War, perhaps a dozen names from those awful days.  This would have been a village of around a hundred people.

The boys stand back. A recording of ‘La Marseillaise’ floods the quiet place, a freedom cry rallying the spirits, ours and the ghosts of the past.  The sound dies down and the Mayor speaks of other wars: the Second World War, the Afghanistan war. He talks of the need to remember, the hope, frail as it is, for our future.  A last prayer, an invitation, and we turn to leave. Aperitifs will be served in the Salle de Fete. It is a final gesture, a ‘Wake’ for all the brave men.

We leave, passing the crypts with their flowers, chrysanthemums for the most part. However, what we see is not all there is. Our eyes see the crypts of today but beneath our feet, deep down, are other crypts.  Indeed, many of them, criss-crossed, slate tombs holding the ancients of a different time, villagers and warriors, men and women – the Visigoths.