God’s largest prison: Albi and its “monstrous mountain of brick” 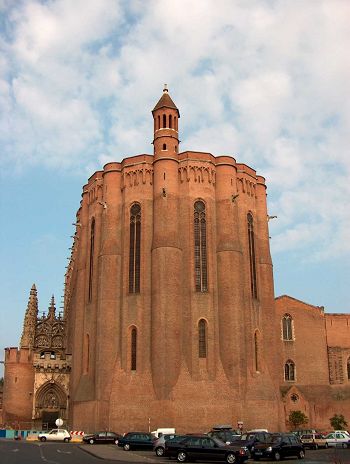 From Rivesaltes station to Albi via Toulouse

The first leg of the journey was uneventful, apart from the distant view en route of Carcassonne, bastioned and turreted “like a magical kingdom floating in the sky.”

And apart also from the genial “bon appetits” from smiling fellow passengers as we munched our picnic lunch.

From Toulouse to Albi

We felt we were really on holiday as the local train (destination Rodez) made its way north east to Albi. Some of the station names evoke strange, unreal places: Monostruc la Conseil, Roqueserière-Buzet, Rabastens-Couffouleux… The only town en route we had heard of was Gaillac, which nowadays supplies very quaffable plonk (and some posh bottles also) to the bars and restaurants we visited.

The changing landscape was as striking as the place names: fertile fields, vines, riding schools, manicured modern houses, and freestanding dovecotes of different designs. The overall impression was of greater affluence than back home – hardly surprising given the P.-O.’s very low income levels in mainland France.

On our first morning, viewed from the large Pont du 22 août 1944, the fortress-cathedral appeared as a nightmarish behemoth, looming in the early morning mist over clusters of terraced houses and the gloomy river Tarn below. When we arrived at the cathedral in the place Sainte Cécile, we were gobsmacked. What a mountain of bricks it is. The walls are 40 metres high, with windows little more than slits, and the vaults add another 30 metres. The width is 35 metres and the length 113.5 metres. There are 32 semicircular buttresses ringing the walls and there is no transept. In short, it is God’s largest ever prison!

Even more bizarre is the lopsided appearance of the bell-tower standing at 78 metres. The corners on the east or church side are embellished by two turrets rising to the full height, whereas those on the other side (west) rise only to the first storey. [(The red cathedral was, in the end, an enraged bellow from Bishop Castanet and his successors. They had seen their world – their power, privileges, beliefs – imperilled by the subversive creed of the Cathars and they had roared out their anger in this monstrous mountain of brick [begun in 1268].

The Cathars, then referred to as Albigensians, were venomously hated as heretics by the Catholic church. By the 13th century they were flourishing in the Languedoc, then a patchwork of states under the control of neither King nor Pope. No wonder the authorities felt threatened. These heretical soi-disant Christians not only rejected the existence of Hell; they refused to receive the sacraments – marriage included – rejected all notions of property, regarded the material world as corrupt, and viewed women as the equals of men.

In 1208 Pope Innocent III decided that enough was enough. The Cathars or Albigensians would have to be exterminated. If the territorially ambitious King of France would spearhead a crusade against the heretici in the parts of the Languedoc where they were well established – Albi, Carcassonne, Béziers and elsewhere – he could annexe those lands. The king agreed and launched a crusade led by the warrior nobleman Simon de Montfort. After years of horrifying butchery, relentless Inquisitions and burnings at the stake, the Cathars were crushed. The decisive event was the massacre at Montségur (in the Ariège) in 1264, though it took several further decades before the Cathars were seen off for good.

What a contrast the refined interior of the cathedral is to the stark exterior! One is bowled over by such glories as the delicate tracery of the rood screen (lacework in stone), the flamboyant arcading and chi-rho christogram on the outer walls of the chancel, the exquisite guilded arabesques above the choir stalls within, the magnificent organ, the enormous 14th century mural painting of the Last Judgement at the west end – and so much more!

All I can say is – GO, GO, GO! One very practical point is that the church is well lit and warm, unlike so many others. The downside, like everywhere else, is that it is closed for two hours in winter for lunch.

Albi’s other riches (in brief) include: the half-timbered renaissance mansions, some with status-symbol towers as testimony to the vast wealth acquired by merchants who worked in the pastel trade; the lovely church of St Salvi, with its bell-tower built in three successive architectural styles; and of course the Toulouse-Lautrec museum (within the Palais de la Berbie). It was very odd to see the originals of so many brothel scenes that lined my bedsit walls long ago.

We arrived at Albi station for our return on La Toussaint, to find just a handful of people and a small dog standing on the quiet platform. Five minutes before the train was due, the crowds suddenly descended and stood in serried ranks about three rows deep. When a tiny little coach appeared in the distance trundling towards us, we knew we were not in for a treat … Tardis-like, the train swallowed all and passengers were soon jammed in like sardines sitting and standing everywhere. Clare wasn’t quite quick enough to commandeer two pull-down seats, and a couple of wraith-like young goths slid into them, studiously avoiding our gaze. When we played the age card, however, they guiltily jumped to their feet and spent the rest of the journey pinioned against the wall of the toilet in a gap that got smaller at each stop.

The train had been advertised as “vélo” but even if there were bike hooks, there was no chance of getting near them. The first bike to arrive squeezed in between us and the young goths, right across the carriage, laptop dangling from the handlebars and the owner perched backwards on the seat, reading a book while propping up the bike. At this point any possibility of access to the loo was ruled out!

Fitting in the second bike posed more of a problem. The young goths flattened themselves ever more against the wall – and everybody near the bikes took on a nervous look, fearing painful jabs to their soft parts from protruding pedals. At one stop, the “wall” we were all squashed against suddenly became the exit door and when it slid open, we all narrowly missed being thrown down on the line, bags, coats, the lot. And just as we thought the squash was terminal, a crowd of tall youths with huge saggy bags got on….. Oh and there was that young man obviously bound for granny’s grave desperately trying to keep his pot of chrysanthemums intact in the crush…

Fortunately this hell only lasted about half an hour and faces softened into smiles as the train pulled into Toulouse Station. The first few people more or less fell out as the doors opened and people, bicycles, bags etc continued to stream off the train. Then it was on to the civilised, spacious station brasserie for a delightful lunch of tomato and mozzarella salad, succulent rôti de porc with beans, and a quarter of red.