Walk the Chemin du Fauvisme and discover what inspired Matisse and Derain to create a painting revolution in Collioure in 1905.

André Derain described the shock and violence of their experience in terms of combat: “Fauvism had been a trial by fire for us…colours became sticks of dynamite. They exploded into light.”

First the two artists had to contend with their own artistic inhibitions, then with the conservatism of the academic tradition and finally with the reluctance of the general public to accept their violently-coloured canvasses as art. 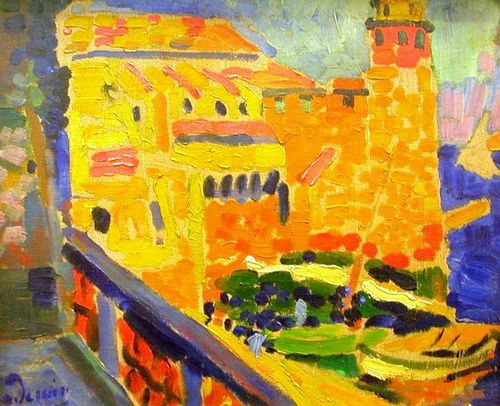 The struggle of these two inventors of Fauvism is brought to life at each stop of the guided tour of the Chemin du Fauvisme. On a Saturday in June I joined an Anglophone tour group of five Australians and a British couple. Our English-speaking guide Cleo, whose grandmother was from Collioure, spices her talk with anecdotes and descriptions of the village as it was in 1905 with 200 fishing boats supplying 45 anchovy workshops which employed 400 women.

What makes the tour experience in Collioure so special is that reproductions of the artists’ paintings are placed at the points in which they were painted, starting on the main beach and winding through the narrow alleys of the Mouret.

“Collioure 1905” overlooks the beach where Matisse painted women in black repairing fishing nets. Raise your eyes to the second floor above the clothes shop and you will recognize the balcony in Derain’s “La phare de Collioure”. From a similar perspective in the heights of the Mouret the two friends painted views of the fishermen’s houses plunging down to the church tower and the sea beyond. It is well worth the climb to see the same scene through the eyes of Matisse, then Derain and finally with your own.