Stick to the limits and you won’t have any problems – but if you’re one of those people who think that speed limits don’t apply to you, be prepared to pay for the privilege and suffer the consequences!

Visit radars.securite-routiere.gouv.fr for an up-to-date look at the positions of speed traps in each region. (temporarily off line when last visited!). By clicking on one of the images, a window appears with the radar’s location (department, road), type, (see below) date of activation and maximum authorised speed at that location.

The map will be updated every two months 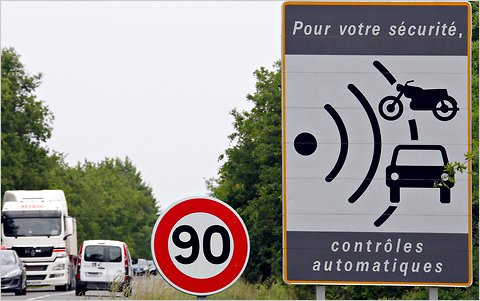 A Quick Look at the French ‘Radar’.

In 2016, a section of the mobile ‘radars nouvelle génération‘, manned at present by the police, was handed over to ‘prestataires agréés’ – approved, private service suppliers.

The move was initially experimental, but was given the green light and  set up around France from September 2017.

Cars installed with radar equipment will be driven by ‘civilian’ drivers, who will be told what areas to patrol, and will simply drive over and over the route directed – the equipment will do the rest, registering car speeds and number plates.

If you’re hoping to spot them before they clock you, you’ll need more than 20/20 vision. These cars are virtually unrecognisable, a small triangle on the number plate being the only sign, so probably easier to stick to the limits!

These ‘voitures-radar’ can flash 30 drivers per hour and will drive around for 8 hours every day, generating around 38,5 million ‘procès-verbaux’ – and millions in extra revenue for the State. Described by the association ’40 millions d’automobilistes’ as “une excellente opération financière pour l’état” it’s expected to be a nice little money maker!

Emmanuel Barbe, representative for ‘la sécurité routière’ was quick to point out that the private company will not be involved with the handing out of fines. “Ces voitures liront automatiquement les panneaux. L’entreprise privée ne participe en rien à la constatation de l’infraction”.

The 319 vehicles equipped with this latest speeding equipment will rise to 440 by the end of 2018
Bonne route!

And there are more!