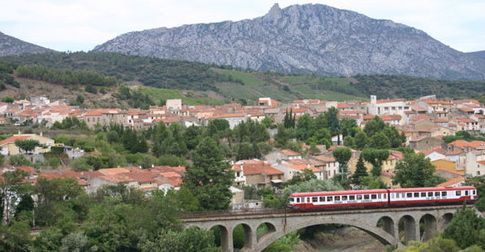 If you head west on the D117 from the Catalan border town of Estagel, with the unforgettable 10th century fortress of Quéribus towering above you on your right, you soon come to Maury, the first village along this route in Le Fenouillèdes, or the Land of Fennel – or even Fenolheda in Occitan-speak.

Les Fenouillèdes are part of Occitan Languedoc, whose inhabitants are rather scornfully referred to by Catalans as “les gabatx” or foreigners. Skirmishes between the “gabatx” of Maury and the youths of Estagel are still not unknown.

Unless they are turning off for the dizzying climb to Quéribus, many tourists drive straight through Maury’s very narrow main street en route for the Aude without stopping to dine, or buy wine – but they don’t know what they’re missing!

Maury has long been famous for its sweet red fortified wines (Vins Doux Naturels or VDN) – rich, aromatic and very fruity, made from Grenache noir grapes. Basically, these wines are produced by stopping the fermentation with the addition of grape spirit, and have enjoyed AOC status since 1936.

The trouble is that not so many people want to drink these magnificent bottles any more. Less than 20 years ago the Cave Cooperative of Maury was close to collapse, with a debt by 2003 of 1.7 million euros. A receiver was appointed to try to steer the cave through the crisis.

So it was that on for the first time in April 2009 the renowned chocolatiers Christian Constant and Olivier Bajard (each holding a coveted Meilleur Ouvrier de France or Best Craftsman of France award) guided the assembled gourmets through an exploration of what must have been a paradise of flavours. Each participant held a glass of Maury in one hand and a chocolate creation in the other. For the chocolatiers this was serious work of course, “with an intellectual perspective”, however amazing that may seem to you and me.

Each year, in June, the town hosts an annual festival celebrating the rich diversity of female artists. Find out more here.