Before its temporary closure, more than two years ago, the Musee welcomed more than 62,000 visitors per year, and benefitted the commerce and culture of Ceret.

With the addition of Covid, Ceret, like everywhere, has suffered twin blows to its commerce and cultural life.

The re opening of the Musee d’Art Moderne, with a newly constructed wing that doubles its previous size, is a new beginning, and the start of better times to come.

Though of huge importance for Ceret,it is also a source of pride for the department, the region, and for the whole of France. Ceret is unique in having extended a welcome to many of the great artists of the 20th century, and indeed to the present day.

The inauguration was opened by Michel Coste, Maire of Ceret, and Vice President of the Musee d’Art Moderne. 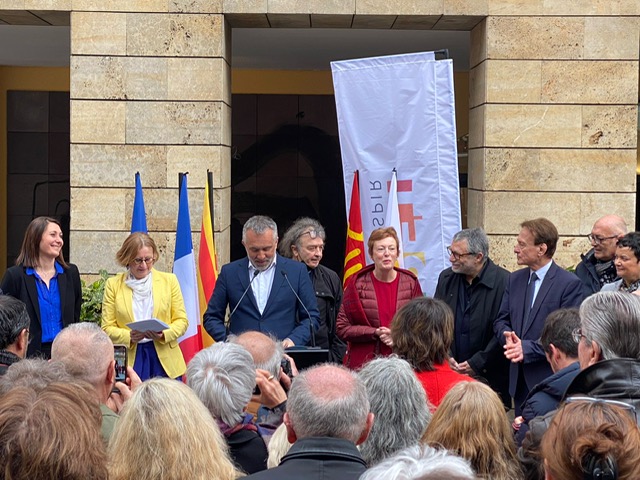 He described the reopening as a day of importance and emotion, and said how very proud we should all be of this commitment to our cultural life.

He was followed by Madame Hermaline Malherbe, Presidente du Department des Pyrenees Orientales, and Presidente of the Musee, who was dressed in the colours of the Ukrainian flag. During her speech, there was a gutteral feedback from the microphones, which actually did sound like aircraft overhead, and she glanced wryly at the sky and said: I knew it was a bit of a risk to dress like this… 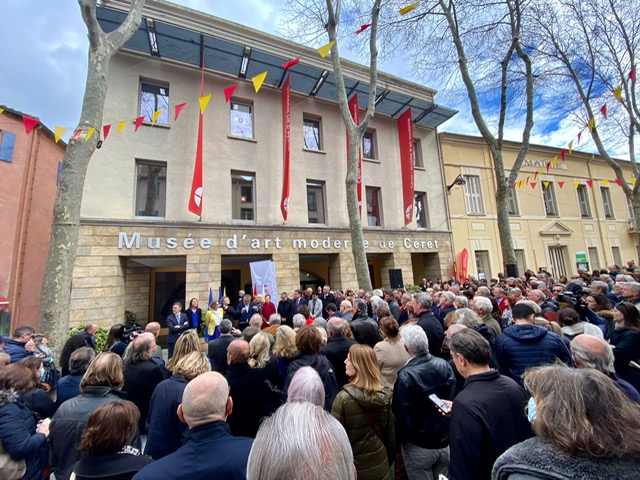 Other speakers included various dignitaries, who shared a sense of delight that, at a cost of 7 million euros, we can all now visit the Musee.

It is hard to overestimate the importance of Ceret, which can be described as the birthplace of Cubism,  and its Musee, first opened in 1950 as the result of an initiative by  painters Peter Brown and Frank Burty Haviland, with the active encouragement of Picasso himself, who donated a number of his works.

For a small town, with an amazing artistic heritage, this Museum punches well above its weight.

I particularly liked the abstract paintings  by Auguste Herbin. They appear to be infused with light in an almost magical way, and are a huge contrast to the more muted palette of some of his contemporaries. 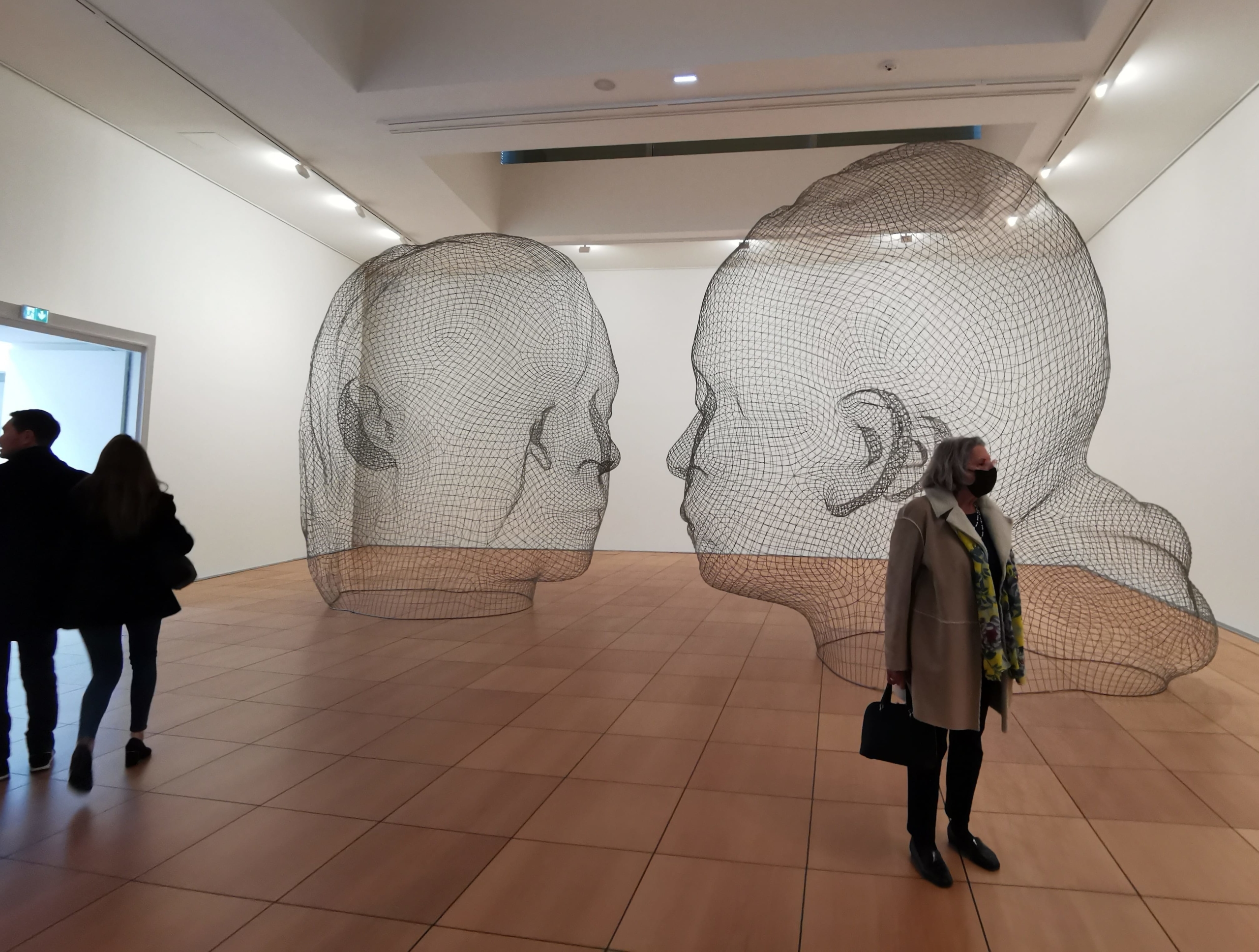 All the speakers alluded to the current war in Ukraine, the  immense suffering of the people and the displacement of millions, some of whom will be warmly welcomed in our region. And it was stated more than once that Art can be an aid to peace. One of the paintings on permanent exhibition, by Marc Chagall, shows a woman and child in a devastated landscape.

This refers, of course, to a previous conflict, but remains sadly relevant today.

Once we entered the Museum, there were further speeches of thanks by Mme. Nathalie Gallissot, Directrice of the Musee,  followed by the architect of the wonderfully airy and light filled new wing.

Unfortunately, a good space for visuals had terrible acoustics, and, with the murmuring of the crowd, despite repeated shushing, these last two speakers were all but inaudible. 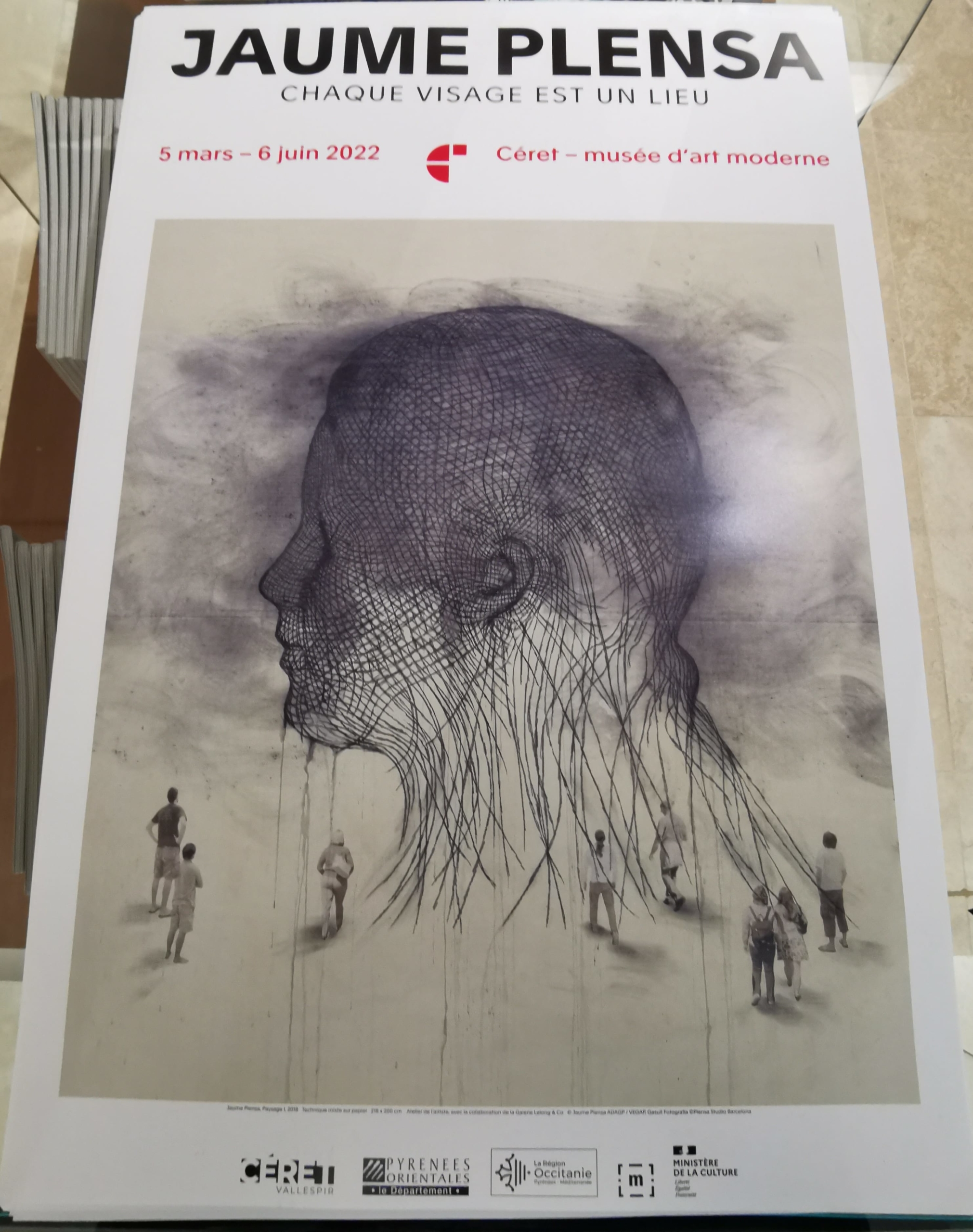 The new exhibition, by the renowned Catalan artist, Jaume Plensa, which will run until 6th June 2022, is a very appropriate way to mark such a revitalisation. His work is big in every sense of the word, and at the same time intensely human.

Many of the works on permanent exhibition are recent, and indeed it has been a matter of debate as to the chronological parameters of ‘Modern Art’. Luckily, the Musee has a knowledgeable and dedicated staff, and ‘Les Amis du Musee’ is a vibrant Association, so there are huge cultural resources upon which to draw.

I met Sheila Taylor in the crowd. She is president of the International Watercolourists Society, and also runs the locally based Association Les Aquarellistes Ceretans. Sheila has lived in the area for 40 years and helped me to put a few faces to names.