Several fraught phone calls later it seemed that our furniture was making slow progress through France in our direction. On the appointed day we received a phone call to say it was on its way up our hill. We ran outside to be confronted by two grumpy blokes sitting in a tiny van on the drive outside the house.

“Where’s all our stuff?” Bill asked.

“In an articulated lorry, bottom of the hill, mate,” came the reply. We helped to offload our stuff and load it onto the small van which was able to negotiate the twists and turns of the hill. The small van belonged to the grumpier of the two men. We found out that he lived near Carcassonne, and rented himself and his small van out to removal companies. A hardened ex-pat, he decided to bestow some kindly advice on us green new-comers.

“Have the Pool Police knocked on your door yet?” he asked as he dropped a box of blue chinaware on the floor.

“No, who are they?” I was feeling distinctly unsettled at the way this conversation was going.

“They’re from the Department of Stupidity,” he replied. “They come along and make sure you’re doing all the correct tests on your pool. Have you tested it yet?”

Our pool was still a becoming dark green colour but no, we had not thought to test it. 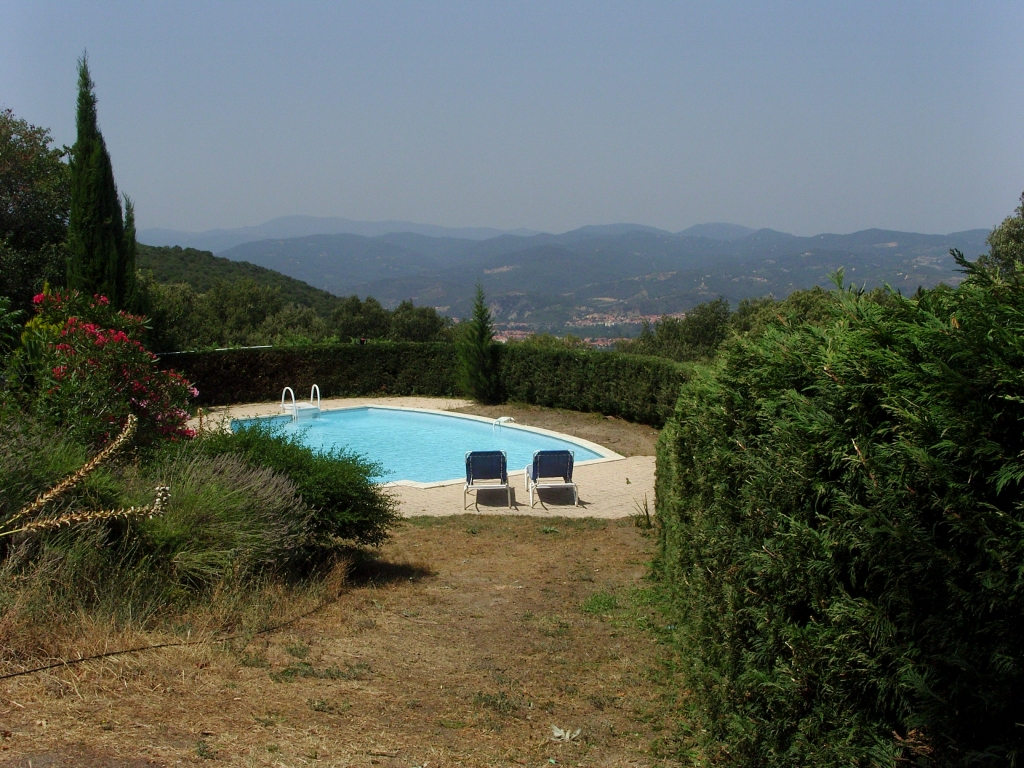 “You do know you have to test it twice a week and keep the results in a log book, don’t you?” he continued, evidently enjoying himself.  “Everything about the pool is regulated. And if they don’t have a law to cover it, they’ll make it up. Get caught out and it’s a hefty fine.”

By this point I’m sure the fear was evident on our faces, and being impressed with the man’s knowledge we suggested he might like to be our ‘pool man’. “Not so likely,” he grunted. “It’s painful thinking about it, let alone telling you.” He went to look at the pool for himself, us trailing nervously behind him, and muttered darkly through his beard that ‘a crocodile would die in there’. This was rather alarming in light of the fact that Bill had been having an early morning dip for the last few mornings.

“You lot up here all belong to an association, don’t you?” he said, rolling a woodbine and sitting himself down heavily on our antique desk. We looked at each other, not sure what he was talking about. “Oh yes,” he said, warming to his theme and spitting out a thread of tobacco. “There’s an association of people up here and you all own a herd of llamas. You’ll have to pay your share, I’m surprised they haven’t been round for the money yet. Yes, there’s an association, they all have fights and fall out. Don’t worry, you’ll find out soon enough.”

Eventually all the furniture was duly unloaded and left on the lawn, looking dowdy and shabby in the bright late-summer sunlight. Grumpy Man levered himself into his van.

“So. You’re near that helipad thing then, just up the road from here?”

“What’s that for?” asked Bill.

Grumpy smirked. “Two uses really. One to evacuate you during a forest fire. The other to rescue you when you get snowed in.” With that, he slammed his van door shut and disappeared down the drive.

The whole mas can be divided into three sections. The part we were in was like an old farmhouse, with three bedrooms on the first floor and an spacious attic with rotten windows and dusty beams on the second. The middle part of the building had a large room on the ground floor which used to house three or possibly six huge wine vats, one of which was still in the corner. Above this room is what used to be the granary, and which I hoped would become my yoga studio. We were completely unable to remember what The Other End looked like and were unable to intrude, as the owner and his two girls were still in residence. Instead we wandered around the middle part, which to this day we call The Barn. It seemed the owner had been a bee keeper and amateur inventor and the ground floor was stuffed with machine parts of all sizes and descriptions, engine bits, parts of bee hives, tools, and a huge metal 45 gallon oil drum full to the brim with honey.

On the floor above, we had to skirt the rotten bits of floor very carefully and up here we found an old weaving loom, an old piano casing and other bits of discarded furniture. Both rooms were packed to the gunnels with a lifetime of rubbish. 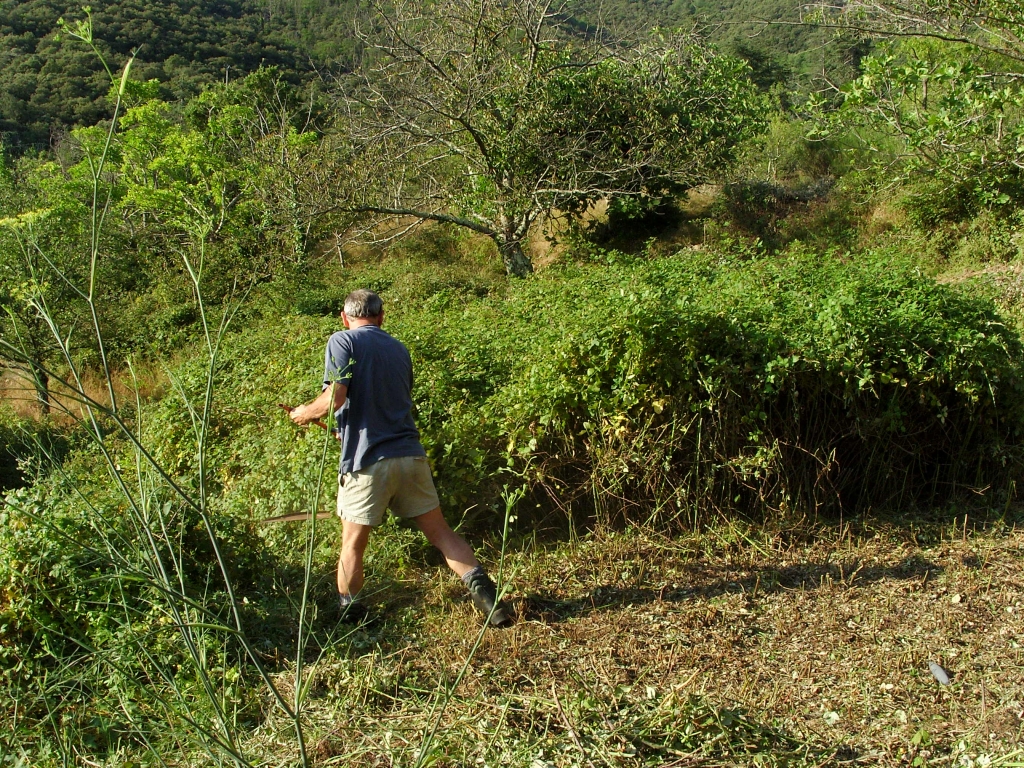 Although the owner was still in residence we took the step of pulling up the carpets in the bedrooms  and throwing it out onto the lawn as (a) they smelled strongly of cat pee and (b) they had fleas. I was pleasantly surprised to find lovely terracotta tiles underneath. But oh horror, what was this? Huge blobs of white paint and glue covered the tiles. Cursing, I started scraping. For his part, Bill attacked the part of the garden we had ear-marked as a kitchen garden. It was covered in a jungle of bramble bushes, three metres high. He cleared around the old mulberry trees and we thought how lovely it was all starting to look.

One night we decided to take a stroll down the avenue and into the woods, and armed ourselves with a torch. But at the perimeter of the lawn a pair of baleful eyes glared back at us. We scuttled very quickly back into the house.

We had been watering the lawn assiduously with mountain water, and it wasn’t long before we realised our mistake. Our efforts had turned the lawn into a swamp. The trees did stop losing their leaves but the whole area had become a mosquito breeding ground. Bill would not venture outside after 9 pm unless dressed in thick socks, long trousers and long sleeved tops, armed with mosquito-repelling candles and a fly swatter. This in fact was the first of our English assumptions to go out of the window. We very quickly learned that Mediterranean plants are adapted to withstand dry, hot conditions, but wet, hot conditions will kill them. Luckily, the trees survived and still provide shelter from the sun to this day.

As summer turned into autumn, with long hot days and clear blue skies, we welcomed our first guests to Mas Pallagourdi. A friend from Cumbria, a young man who called himself Bezerkas Circus was to entertain the French family in The Other End by nearly setting fire to his crotch. More next time.