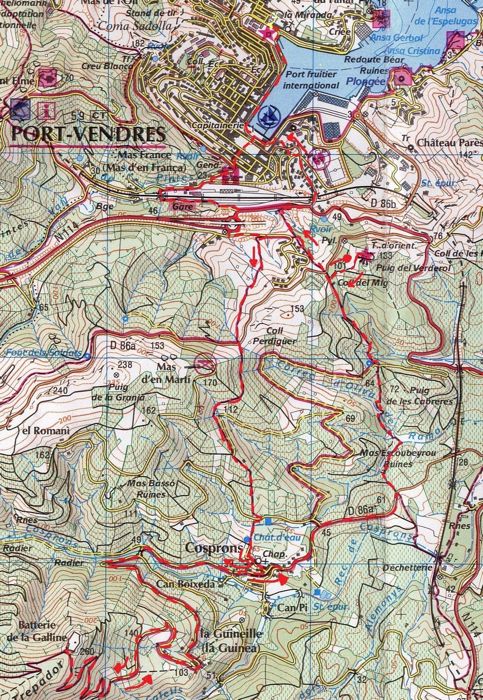 This walk  over the hills to the charming quiet hamlet of Cosprons, then on to the hamlet of La Guinelle and  up to the Batterie de la Galline built in 1885-6 at a height of 260 metres. Spectacular  views with perfect natural ecology throughout its distance.

The going is steady and uphill in places but at no time is it dangerous, difficult or particularly strenuous for walking.

We did this walk for the first time in March and the wild Spring colours were wonderful with mimosa, periwinkle, lavender, heathers, marigolds, gorse and magenta. Pink coloured wild pea was ever abundant and the walk was  frequented by every species of butterfly from swallowtails to wood browns to Cleopatras to green hairstreaks. All about us were many species of birds, amongst which the warblers, redstarts, finches and kestrels were the commonest. We twice saw the ridiculous displays of cock golden pheasants as they swore at us and scuttled away from their hiding as we approached. 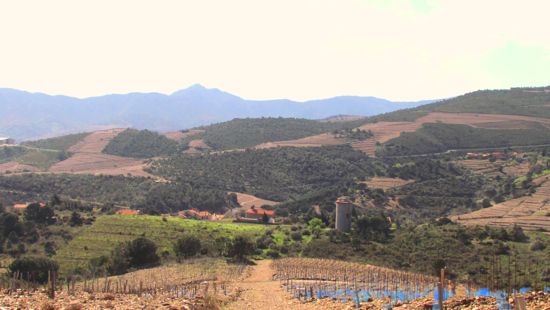 Start at the Market Square (Place de l’Obelisque). and drop down to the harbour edge following it to the steps and up to the small leisure park, Place Castellane. Check out the bronze statue portraying two young lovers from Port Vendres ‘Fenouil et Fenouille’ embracing.

Cross to the back and up the short street, rue des Paquebots, to the ancient steps that lead away to the left and then left at the top. Proceed past the station and along the first stretch of the Val de Pinte road.

This easy track continues for a few hundred metres and emerges on to a wider cart track where another left turn is taken leading to the busy roundabout on the N914 (sometimes called the RN114). At this point cross the road, keeping to the left and go under the bridge that spans the left limb of the roundabout. Ignore the cul de sac and  proceed around to the right where the new road goes up to a modern housing estate.

After about 100 metres there is a yellow sign on the other side of the road which points to Randonnees 6 & 8. Follow the path up for No 8. This footpath steadily climbs up the hillside between dry stone walls and already there is a plethora of wild flowers and herbal aromas of fennel, mint and marjoram in the summer and heather, lavender and rosemary in the Spring with an abundance of yellow gorse and Mimosa. The path seems to move as grasshoppers jump about around the feet.

At the top of this moderately steep climb, cross over the D86a and proceed into the vineyards with vines either side of this charming walk which gives views over to the final peaks of France with Cosprons nestling in the valley.

As the track turns sharply to the right continue along it, ignoring the one it crosses as it descends into a small valley running parallel to a “not regularly maintained” road which the path then joins as it peters out.

At this point continue slightly to the left down a narrow path and head to the left of the Cosprons water tower that looms in front.

Cross the lane keeping to the right where immediately the narrow path continues down to the ditch and passes the water tower, emerging in the hamlet where the chapel of yellow orange stone and low single belfry brings immediate charm to this prosperous little community.

As the route de la Chapelle joins the D86a running through the village, turn right and down the hill to the outskirts of Cosprons. At this point the mountains tower above and with no effort at all it is possible to see 5 military installations at once: la Batterie 500, Tour de Madeloc, les Casurnes du Centre, la Batterie de Taillefer and in the eminent central position and closest is the target of this trip, La Batterie de la Galline.

At this point take the right fork in the road, (also signed to the Vinaigrerie de Guineille), which runs parallel to a verdant and V shaped valley and along its route are ancient gnarled vines (‘vielles vignes’) seemingly overflowing onto the road. Follow to a bend which at this point crosses the brook Cosprons.

Immediately take the right fork (the left is signed to the vinaigrerie again) and start climbing the narrow cork oak wooded slope and although this is still a road for traffic, it is very quiet and only travelled by local residents. 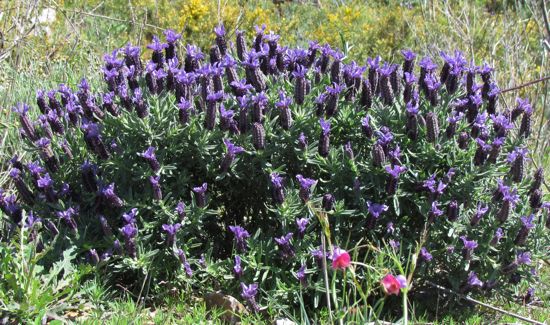 With Mother Nature proudly showing off her colours all around, the road steadily climbs to the seemingly forgotten and charming hamlet of La Guineille at 103m. Beyond this collection of houses and their well-kept gardens, the metalled surface stops and a track continues. It is rugged but not difficult and the gradient not severe as lavender and wild sweet pea predominate this open slope.

La Galline is ever dominant on this climb and towards the top at each hairpin bend, the question is asked; “Is it not around this next corner?” The views from this track are magnificent as far as the coast out to Cap Bear with its lighthouse, the three beaches at Paulliles and Cap d’Ullastrell are all clearly visible whilst further round to the South-East Banyuls sur Mer comes into view with the Laboratoire Arago, (Paris University Marine Biology department’s large aquarium) is clearly visible at the far end of the promenade.

The mountainside here is deeply hewn by steep ravines which at their base have raging torrents in winter but double as dried ditches during the arid summer months; this is particularly true of the valley of the Callels which joins the Cosprons at Cosprons. 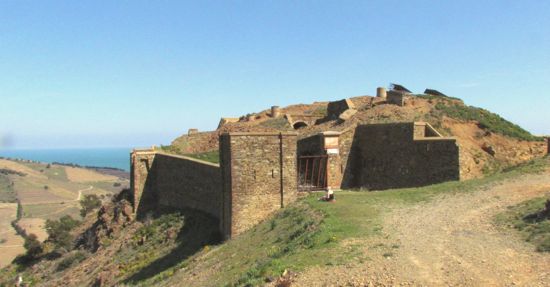 After many years of closed dereliction, Batterie de la Galline is now open for viewing. A small association, L’Association La Galline’ [ www.lagalline.net 06.63.82.29.68 asso.lagalline@gmail.com ] has taken on the titanic task of renovation and injection of function into its status.

For 1€, one can experience the ultimate atmosphere of this 19th century hilltop fortress and the direction in which this group of enthusiasts wish to take it. One is is full admiration for the group for their energy to bring back to life such a fascinating and important landmark to Port Vendres countryside.

It is a paradox of construction for on the gateposts of its very impressive drawbridge entry it displays ‘built between 1885-6’; but why? Was it a training ground for French sappers during a boring piece of peacetime, or was there another purpose? There are stories of it being built during the turgid times of Phylloxera and equally it may well have been a deterrent to further potential invading Spaniards who in 1870 had taken advantage of the more northerly Franco-Prussian war and invaded French Catalonia.

Considering it is constructed from severe well hewn rock and built in a strong military manner in a commanding position, it is very extraordinarily intimidating and would have been difficult to breach by any army stupid enough to climb this monstrous hill. The views from here in all directions are stunning. There is a tantalising suggestion that Tour de Madeloc is not far away and no more difficult a climb than the current one, but it is suggested this extension be the topic for another much longer day out or left to mountain goats.

From this point, the walk retraces the steps already taken but with such panoramic view of the world from above, the return journey offers as much pleasure as the ascent. Return to Guineille and Cosprons and pass the route de la Chapelle on the left continuing through the village along the D86a for about 1km, where there is a choice of left or right footpaths on each side of the road.

The one to the right drops down to the river bed of the river Cosprons but the one on the left is the one to take. It can be a bit tricky keeping to the correct track here, which drops down a gulley. In about 100m take a sharp turning right into the vineyards and then the ruin of Mas Escoubeyrou comes into view where only 3 walls still remain as a tribute to something previously majestic.

Keep to the right above this old ruin, cross through a gap in a wall to the left, dropping down to the Ruma brook. Cross this and then on the other side keep to the right following the edge of the stream along the edge of the vineyard to the corner where another torrent joins. (These deep ravines in summer months form the track of the walk but in winter they are full of water)! Here, turn sharp left and follow upstream for about 25 metres, and then sharp left again for about 5 metres where a wooden plank crosses the third stream course.

From this point on, it becomes quite straight-forward as the path becomes grassy, passing through 2 to 3 metre high heather shrubs, which in Spring bear heads of many tiny white flowers. As the edge of vineyard field is reached, turn right for 5 metres then a deep gulley opens up which is the path up the hill. (Do not be surprised if a cock golden pheasant leaps out of the shrubs here).

Exercise discretion throughout the route of this upward track for at times passage is not good and keeping to the left edging wall top is more advised. Very soon a white cottage appears on the left as the path crosses a country lane, (once the other side the path is more settled and easier to follow). A glance to the right gives sight of a bend on the N114 at Paulilles about 100 metres away.

Climb steadily up the hill through the pine woods that gradually thicken all around to the brow of the hill where just before the D86a take a rough bridle track to the right and then if the middle lane is followed, an orientation point is found. 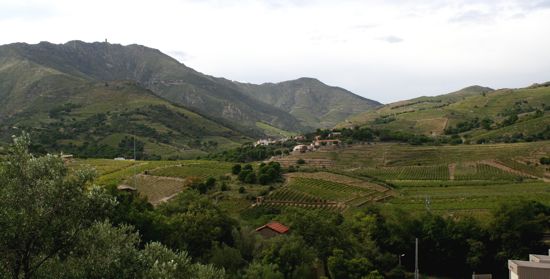 Return to the path and cross the D86a and proceed down the other side with high views of Port Vendres between the pine trees. This narrow rocky path drops down on the edge of a new housing estate but to the right, the unspoilt pine wood and vegetation has probably not changed for hundreds of years.

Just as the houses on the left are being left behind there are two options; to take a short path up to the left which opens on to the access road to the previously mentioned housing estate, which drops down to the roundabout on the N114 from where retracing via the edge of the railway line can be taken.

Alternatively, continue straight down, ignoring the yellow cross on the rock and this lovely length of a couple hundred metres of path are much more pleasant but be careful at the bottom dropping into the ditch immediately before the road. Climb up over the concrete barrier and turn right with caution, keeping close to the barrier on this busy stretch of road but it is only about 100 metres.

When traffic permits, cross over the road and at the corner of the next junction, opposite the Hotel Le Cedre, follow the road down into the village to the next cross roads, take a left turn and then the steps down on the right. Cross over the main road and down the next flight of steps to the harbour, and a well deserved drink in one of the bustling cafés.