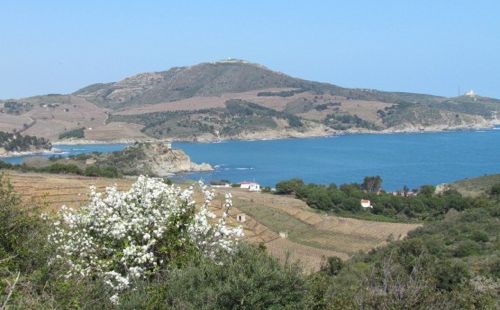 This walk starts and ends at Paulilles, south of Port Vendres – the town has recently claimed the beach for its own, but that does not change the unspoiled beauty of its pebble-dashed sands and crystal clear blue water, nestling beneath immaculately terraced vines.

Start at the beach, or in high summer more likely at the car park by the roundabout exit to Cosprons.

Instead of following everyone towards the sea, head to the southern end of the car park where there is a footpath leading through part of the ruined Nobel brothers’ dynamite factory.

While it may seem odd to recommend a walk between a railway and a main road, bear with us, the rewards are worth it!  The footpath tracks the railway through the hills (don’t go under the bridge or you’ll be on the wrong side!) You are surrounded by vines, trees and cacti, but with beautiful views up to the Tour de Madeloc.

Follow the footpath south up to the top of the hill, where you emerge next to the main road at a roundabout looking down towards Banyuls. This is the Coll de Pere Barnera. 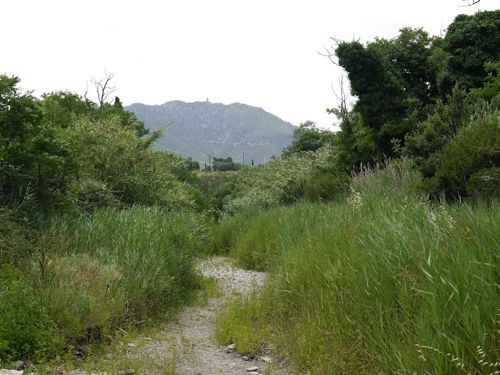 Cross the road here and take the gravel track eastwards, following the contours of the hillside in between vineyards and a conifer plantation. Everywhere there are ancient – looking dry stone terraces and carefully tended vines, and you are quickly lost in nature and surrounded by birdsong. 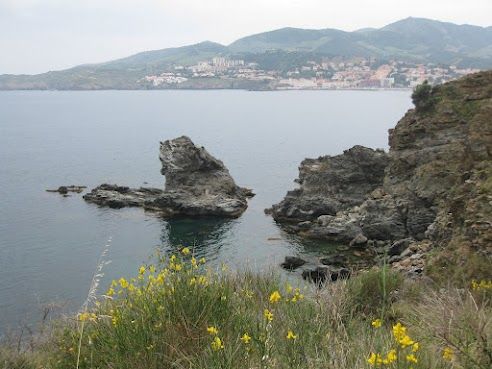 When you reach an open vineyard, at 510452E 4704380N, you can choose either to turn right and downwards to the sea or short-cut through the trees straight ahead, which avoids climbing back up to the path later.

On exiting the trees and turning right, you emerge at the cliffs overlooking the sea, named Cap Castell de Velló. After admiring the impressive views of Banyuls to the south and the waves rolling onto the rocks below, retrace your steps inland about 80m and turn left and follow the footpath northwards and upwards. It is well marked with yellow paint.

There is a fork in the footpath at a semicircular car turning space at 510690E 4704690N, you should turn right here instead of heading inland. (We didn’t and ended up having to climb over a drainage ditch, a familiar Foster tactic!)

Follow the footpath north down the low ridge parallel to the coast, to Cap d’Ullastrell. You can find a very good description of this part in Ted and Kate Hiscock’s walk where they describe  “views across to Cap Bear in one direction and to Banyuls-sur-Mer in the opposite direction whilst inland and behind are Cosprons, Tour de Madeloc and to the left, the three beaches, their ruined fortresses, concrete excrescences from World War II and the admirably adventurous development of the Conservation Site of the Dynamite Factory of Paulilles.”

After crossing the Cap you reach a small road leading to Platja del Forat, a seemingly forgotten pebbly beach fronted by a handful of low houses.

As you continue north, you have to leave Forat and follow the road behind the ruined factory to the larger beach at Anse de Paulilles. At the north end you follow a small creek inland about 100m under a footbridge, and climb up to the right to pass through more ruins, being swallowed by vegetation.

The path winds through the thick woodland over the promontory before you finally descend to your starting point at Plage Bernardi for a refreshing dip in the sea or, if you’re lucky, a cold drink!