One of the greatest things about winter is that the life of the animals and birds of the mountains is much easier to see and understand thanks to the snow. 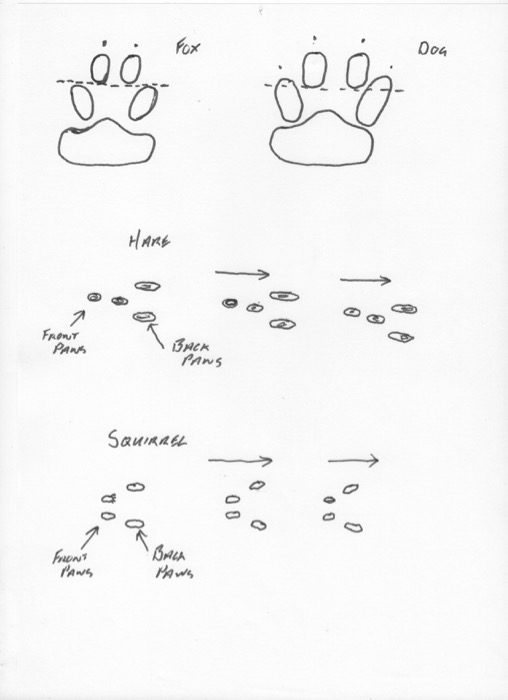 In summer much of the wildlife goes about its daily business without us being aware of its presence. We occasionally catch glimpses of something, a print in the mud at a drinking hole, some poo on a rock or if you are lucky a flash of movement out of the corner of your eye.

In winter that privacy is gone. The snow lays bare the passage of anything that moves on it and with a little knowledge and understanding we can see the life of the wilderness residents on the ground in front of our eyes.

In this series of short presentations I hope to explain some of this to you so that you too can get a feel of what is happening around you when you next take a walk on the wild side.

For this first of the series let’s look at some classic animal tracks that you often see in the local snow. 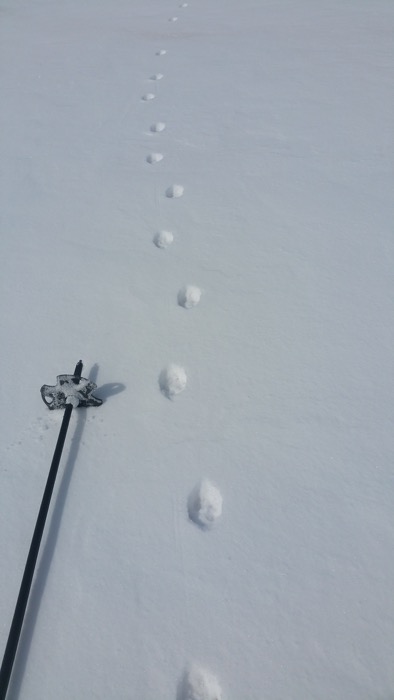 Foxes and dogs leave a similar imprint in the snow but with two important differences. Firstly foxes are wild creatures and hunters, so they do not waste energy like your average well fed domestic dog. Foxes always walk in straight lines; dogs run round in circles like complete idiots with energy to burn. You will often see fox tracks going from bush to bush, tree to tree or bank to bank searching for its prey. You also often see fox tracks following Hare or Rabbit tracks, a favourite meal, but hard to catch. Always straight lines…

The second difference is harder to see unless the prints are good, but essentially dogs and foxes have a paw with 5 pads; two at the front, two in the middle and a large pad at the back. The difference is that the two sets of front dog pads overlap and fox pads don’t (see the sketch).

Hare and rabbit tracks are very similar in style but there is a difference in size. Hare tracks are generally much larger, both in paw size and overall track size. Up in the Cerdagne-Capcir area there are virtually no rabbits, so generally what we see are hare tracks. We have two different types of hare, the Common or European Hare and the Mountain Hare. The difference between the two on the ground is hard to tell as the sizes are similar, but the colours differ if you get a chance to see one. The Common Hare is all sandy brown and stays that way all year round. The Mountain Hare has a white tuft on its tail in the summer and goes completely white in the winter.

Hares can walk but the most common and easily recognisable track is as pictured. Here the hare is bounding. The first two smaller prints are the front paws which land first. The two larger prints are the back paws which come around the front paws to land together then launching the hare into its next bound. The overall effect on the ground is a Y shape and the hare is moving in the direction of the opening of the Y (see the sketch).

There are no Grey Squirrels in the Cerdagne-Capcir valleys, so all the tracks are of Red Squirrels who eat pine cones (pine seeds to be precise), so when you see a squirrel track on the ground it is because it is going from tree to tree. They are vulnerable on the ground, so this is always done in a bounding dash. As you see in the picture there are two smaller prints close together and two larger prints further apart. The two smaller prints are the front paws landing first pretty much together; the back paws then come around the front ones to land and launch the squirrel into its next bound (see the sketch)

In the next of the series I will look at some of the harder to see animal tracks we get in our area.

Enjoy your next walk in the snow and see how often you can spot fox, hare and squirrel tracks.