Emmaus was founded in Paris in 1949 by Father Henri-Antoine Groues, Catholic priest, MP and former member of the French Resistance during WW2.

He was better known by his resistance name of Abbé Pierre.

During the Second World War, he helped many of the persecuted to escape to safety, including Jacques de Gaulle, brother of Charles, and his wife whose escape he assisted to Switzerland.

At the end of the war, he was awarded the Croix de guerre 1939-1945 with bronze palms and the Médaille de la Résistance.

When a desperate, suicidal man came to him for help, he took him in and asked him to join in his mission to help the homeless.

Georges became the first of a group of ‘Emmaus Companions’ supported by and living in the home of Abbé Pierre, working to build temporary homes for those in need. 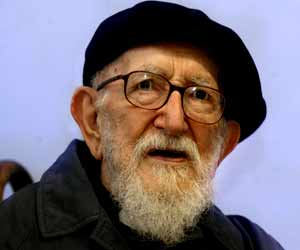 The name Emmaüs is taken from a village in Israel appearing in the Gospel of Luke, where two disciples extended hospitality to Jesus just after his resurrection without recognizing him.

When the money ran out, Abbé Pierre toured the restaurants and businesses of Paris begging for donations.

His ‘companions’ were outraged. There had to be another way. They became rag and bone men, going through bins, collecting people’s unwanted items and selling them on….and so Emmaus was born.

Donate any unwanted items by taking them along yourself (off the roundabout at Pollestres on the Perpignan – Le Boulou road) or arrange for larger items to be collected.