Food for Thought from Suzanne Dunaway

P-O Life reader, Suzanne Dunaway, has cooked since she was 5 years old, when she made cinnamon pinwheels from her mother’s pastry dough.

She LOVES to cook. Some might say she LIVES to cook. The smells, the tastes, the textures…

She is a firm believer in simplicity and creates her recipes in the ethos of ‘anyone can cook’.

After years of experience in her own kitchen, cooking schools and private classes all over the world, in this weekly blog, Suzanne shares with us her PO-inspired creations.

With many strings to her bow, she is also an artist and columnist, with two published cookbooks.

No Need to Knead

This is the famous staple in Catalan menus, served alongside roasted meats or as an addition to apéros on small toasts made from baguettes or whatever bread you like.

When I make this and it’s right out of the oven, I take a lovely large spoonful and think of all the vitamins I’m ingesting, haha.  And how olive oil is so, so good for the complexion…

I have been advised by a long-time Colliourenc that she never used courgettes in her escalivada, but I find that you can use or not use them, as long as you caramelize the whole shebang!  And I prefer escalivada over ratatouille any day, so I do use courgettes when I have them. 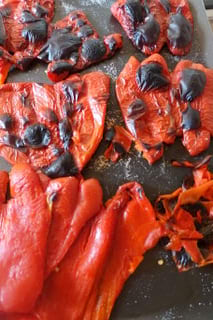 I used to roast my peppers first, because of their sometimes questionable digestibility, but you don’t have to with this simple, all-in-one-pan recipe.

To ensure a pepper’s flavor, choose the wrinkly, sugar-filled red, yellow or orange ones, as the sugar content helps them give up their peel more easily if you choose to roast them for other dishes, such as the lovely anchois/pepper/hard-boiled egg salade of Collioure.

And don’t take this amiss, but I do not ever use green peppers.  Long story about that one, but I find the other rainbow peppers much sweeter and tastier than the green ones.  Green peppers and sprouted garlic are my no-nos.  Fresh green chili peppers excluded!

To roast peppers: Cut the (wrinkly) peppers in half, take out seeds and white inside ribs, and flatten them on large cookie sheet. Broil, skin-side up until nicely blackened all over, then cover with a damp towel to sweat.  When cool, you can peel off the skins easily and cut peppers into strips for other dishes. 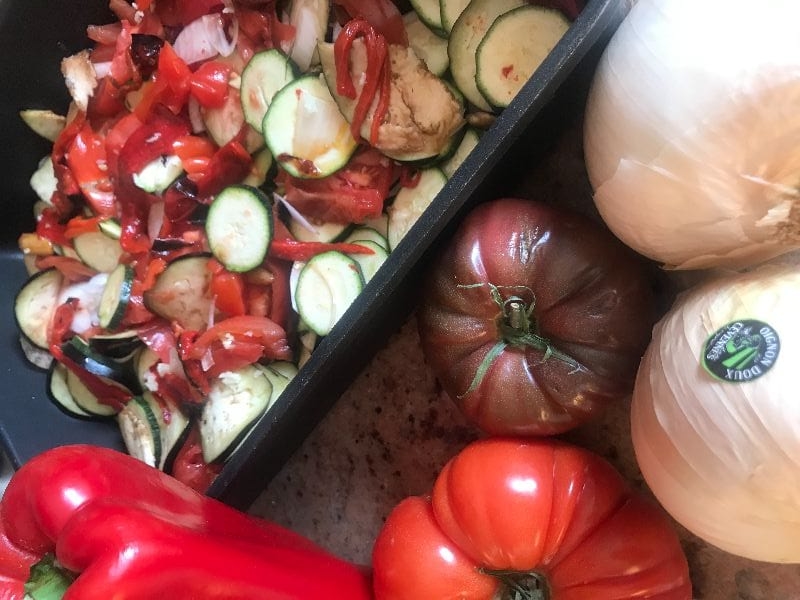 Throw all of the ingredients into a large, non-stick baking pan brushed with a little of the olive oil. Pour the rest of the olive oil over all, salt well, and add the juice of the lemon and its peel, grated. Toss everything around in the oil and then bake the escalivada about 30-40 minutes until the vegetables are almost caramelized, very soft, and you are dying to taste it.

Serve as a side dish or with toasted bread, or pulse it a few times in the top of a food processor and serve over pasta. 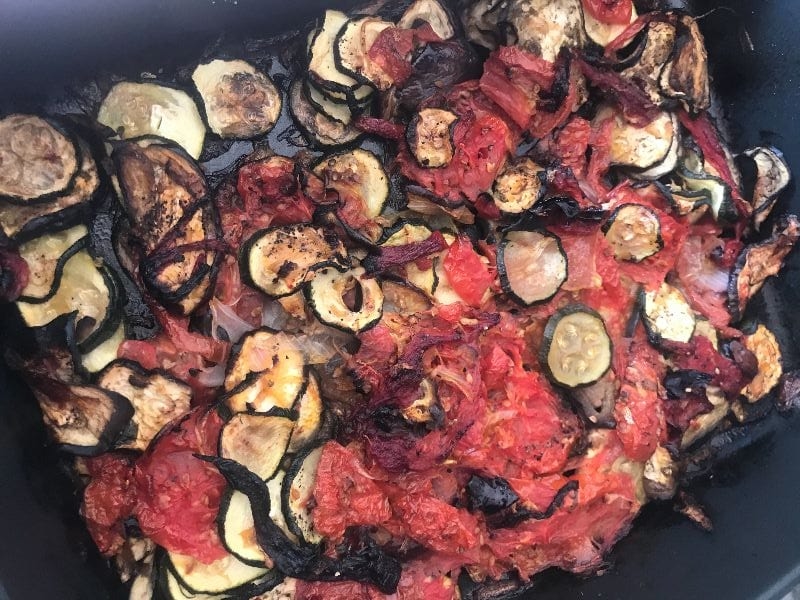 If you test this recipe, please share your comments and photos in the space below.