Starting off at Millas, on the N116 between Perpignan and Ille sur Têt, follow the signs towards our destination, Força Réal.

Situated between Millas, Corneilla-la-Rivière and Montner, at an altitude of 507 metres, the panorama from this stunning view point extends along the coastline from Port-Vendres to Leucate, across the Agly and Têt valleys, over the Albères, Canigo, Carlit… Truly fabulous. 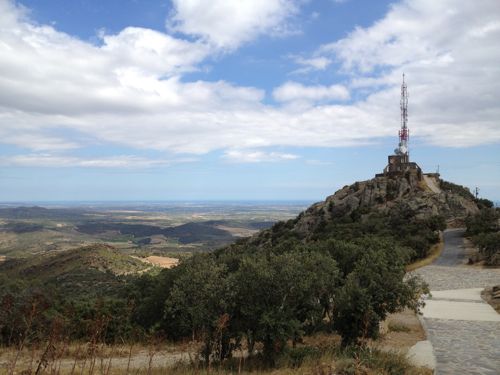 Over the years, Força Réal (Royal Fortress) has been many things to many people! Signal tower and fortress for the defence of the Roussillon, welcoming beacon landmark for returning fishermen, hermitage, and today a ‘tour de guet’ for fire spotting. On a clear day, the view will take your breath away.

Built in 1258 by the kings of Aragon to reinforce Roussillon defences, the original signal tower and small fort, constructed on two adjacent hills, were destroyed in the 17th century. The fort was transformed into an hermitage and ‘Conjurador’, its function to appease the elements and chase away storms and summer drought.

For the more energetic, a labyrinth of well signed walks for all levels, with ‘sentier botanique’ identifying trees and shrubs, will take you up to a large viewing platform, looking out over the wine villages of Montner, La Tour de France to your far left, Estagel in the distance. Further afield the Corbières and Queribus. 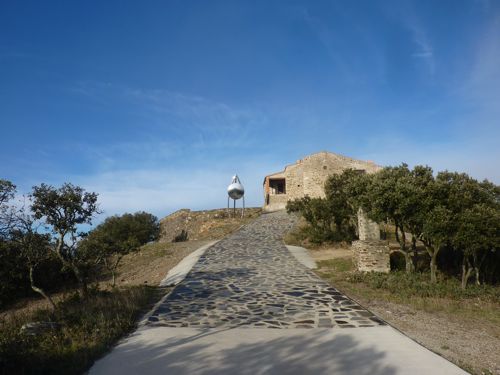 If you simply prefer a pleasant drive all the way up to this panoramic viewpoint and picnic spot, take the RD 38, from the Col de la Bataille so named after the treaty of Bayonne when the King of Aragon, Jean II, handed over the Roussillon and the Cerdagne to Louis XI of France. Years later, for various reasons, Louis’s successor, Charles VIII, decided to get rid of the rebellious Roussillonnais, and handed them back! In 1496 the fickle king marched back into the Roussillon and waged war against the Catalans once again, a decisive battles taking place on the Col de la Bataille, as it was subsequently named.

The col is also a poignant memorial to members of the resistance group Henri Barbusse, a reminder of courageous men and women who gave up their lives for the liberty which today we take so much for granted. 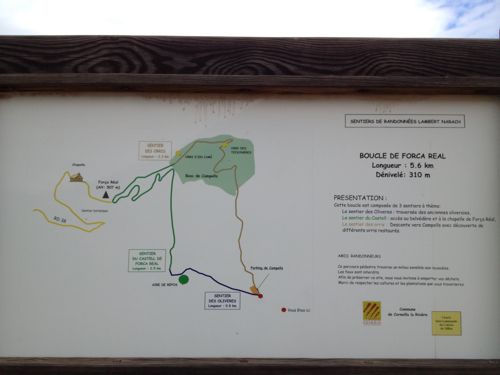 Follow the winding road up to the large free car park and a short five minute climb will take you up to the pretty chapel with orientation table, passing the fascinating polished steel convex mirror which reflects back the enormous views around you. Unfortunately, the chapel is rarely open, but masses and processions do take place there on festival and Saints’ days.

A path to your left takes you to the main viewpoint with a telecommunications mast (which somehow manages not to spoil the views) and a fire watching hut. In summer, volunteers with binoculars and walkie-talkies, linked directly to the emergency services, are on constant alert throughout the day. 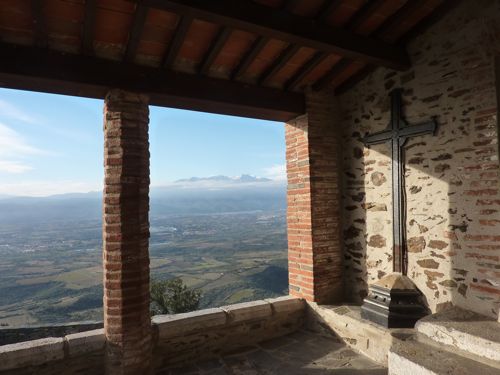 A visit to Força Réal is not recommended on a windy day, unless you wish to lose your hat and anything else that’s not well secured to your body!

Back in Millas, olive oil fans will not want to miss a visit to nearby Mas Saint Pierre,  a small detour on the route to Thuir, where Monique and Joseph Planes, along with their son Victor, offer olive oil tastings and guided visits of the latest oil extracting machinery. Although there are several other olive oil mills in the area, what makes Moulin Saint Pierre stand out are the wonderful views across to Força Réal and the interesting on-site house, where the current owners live. Its désigner was fashionable Danish architect, Viggo Dorph-Petersen, who also designed Château d’Aubiry in Céret, Château Valmy in Argèles and Château Ducup St Paul in Perpignan – to name a few!