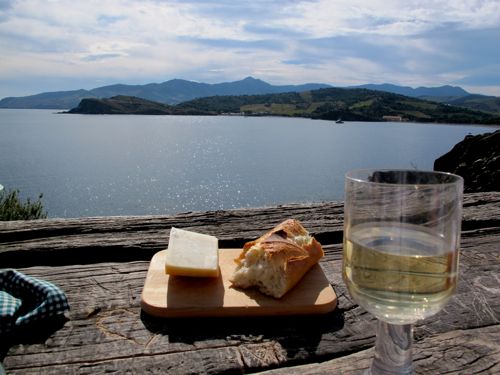 No-entry signs should always be listened to, even if the forbidden fruit is a tempting track beckoning you onwards!
The “Route Militaire/ Accès Interdit” warning was intimidating but we snuck past it anyway, heads lowered. What a relief then to see a second sign a few minutes further on, and to realise the restriction referred to the tar road leading up to the fort and not the little sand lane veering seawards!

Forty minutes later, far away from the no-go zone, we discovered a heart-etched table perched on the edge of the Cap Béar cliffs. Perfect for a spring feast of sun, sea and sandwiches!

Both the Tramontane and the Marin winds lambaste the Cap Béar headland, so make sure you pick a still day for your picnic. Or turn lunch into sundowners and witness the full glory of the Côte Vermeille, Vermillion coast; so named for the way sunset drenches the sea and hills in reds and golds. 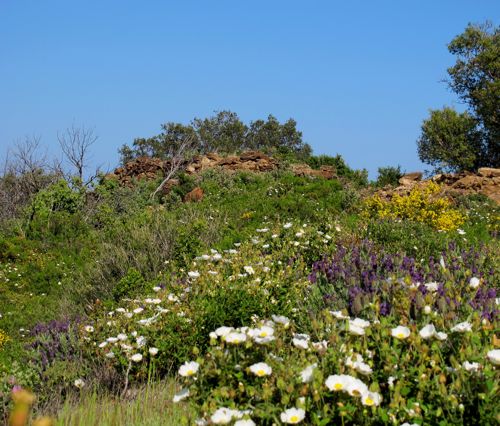 Head south along the D914 coastal road (see box inset for detailed directions). On passing an enormous green wine bottle on the side of the road shortly after Port Vendres, warn cars behind you that you’re about to turn. Minutes later, near the crest of the hill, slide left into an unmarked slipway. Park on the right just before the first no-entry sign. Walk a hundred metres or so along the road and before the second no-entry sign forbidding access to the fort, turn right into a sand lane.

Built in 1883 to protect the French border, Fort Béar sprawls across the top of the headland, looking more like a tourist destination than an active military installation. It played a key role protecting the Paulilles ammunitions factory during WWII and still belongs to the military today. Occasionally the public is allowed inside on the Journée du Patrimoine heritage days. 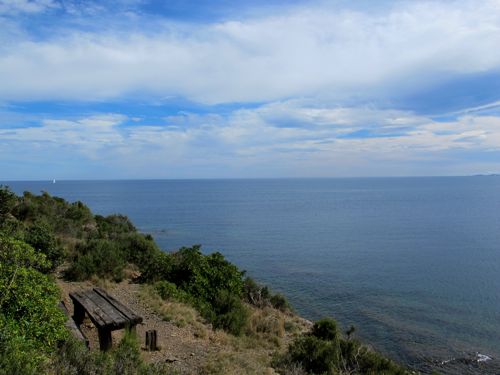 Enjoy an easy stroll through a spring wonderland of cistus, wild lavender, gorse, and vineyards bristling with bright green shoots and leaves.

You’ll also see abandoned terraces stuttering down the hillside, without a vine in sight. No doubt victims of “grubbing up”: regionally financed digging up of vines to combat the wine glut.

After a 25 minute meander, the path nears the cliffs. Watch out for three rusty metal poles leaning together like an empty wigwam, and no longer attached to the ramshackle wire fence drooping downhill. Turn left towards the sea. The bay of Paulilles glistens in front of you, and on the other side, vineyards cover the slopes like a patchwork quilt. In the distance is Spain and the long slender finger of the Cap Creus peninsula reaching far into the Mediterranean.
A five minute steep but stable walk downhill brings you to a cliff of jagged schist rockface that drops dizzyingly into the water. If you’re not planning to jump, turn left again and follow the path running parallel to the edge. Your table awaits just ahead! 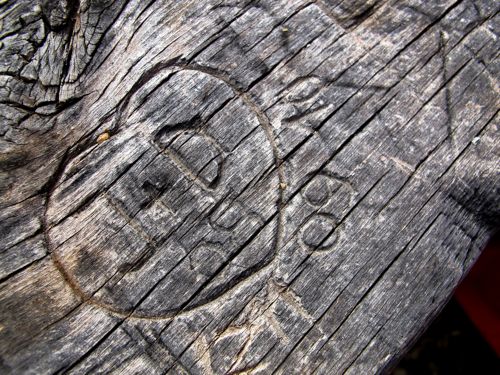 We sat on the weatherworn bench, opened a bottle of white wine and raised a glass to whoever dragged railway sleepers uphill to create this idyllic picnic spot. The hearts, names and dates carved into the wood each tell a story… perhaps our intrepid carpenter left his initials somewhere on the weathered surface?

Unpack your lunch, and find a corner on which to carve your heart! Bon appétit!

How To Get There
☛ Time needed: allow 5-10 minutes from Port Vendres by car then a further 30-40 minutes for an easy stroll to the picnic spot.
☛ Head south along the N114 freeway. At Port Vendres it becomes the D914 coastal road.
☛ Minutes after the bustling port of Port Vendres, you will pass on the left a massive green bottle standing next to a red wine-tasting shop, slow down as at the crest of the hill, you will need to turn left into an unmarked slip-road.
☛ Ignore the “ROUTE MILITAIRE ACCES INTERDIT” sign. (The no-go zone only starts 200 metres further up). Park on the right, after the WWII bunker.