Cherries, apricots, grapes and peaches may be our region’s above ground treasure, but iron ore and other metals, even gold, are its underground bounty, mined in the Pyrenees Orientales since early Roman days.

The iron ore found deep within Mount Canigou has over the centuries adorned churches, noble homes and palaces:  the fences of Versailles Palace are forged from our metal. 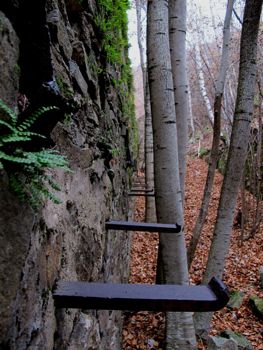 Remnants of the mining industry still scar Canigou’s flanks. A coil of iron rope on the edge of a precipice could be a leftover pulley system, transporting the day’s haul in great metal basins that swung heavily to the opposite side.

The occasional abandoned railway carriage lies belly-up where it fell, often in the oddest places, and weathered railway sleepers today provide a perfect path to meander along.

Until the early 1800’s, mining was manual and dangerous. Village children started young, first as apprentices, handing tools to older miners, then when they were stronger, as wagon-pushers.

Entire villages were made up of miners, coalmen (for the forges), mule skinners, blacksmiths, and transporters.

It’s just over an hour’s drive from Céret to get to the spot from where you’ll walk 45-60 minutes along a tree-lined path that was once the access route to the Mines de la Pinouse. (See info block below for details on how to get there.)

Once you reach Col de Palomère (about ten minutes past the little village of La Bastide), ignore the well sign-posted path on the left, and drive up the concrete track.

The road is part concrete, part stone, (and part sludge if it’s rained!), but if you drive slowly, your city car will find its way to the dead end: a small field that’s just to the right of two tracks heading further up the mountain.

The track you want is the gated one with the small signpost “chemin d’enfer” hammered onto a tree. Walk through the small opening on the side the gate and follow nature’s copper carpet of leaves through a dense beech forest whose stark trunks and branches form skeletal silhouettes against the autumn sky.

After about half an hour, you’ll come across an old miner’s cave that’s been annexed by a bat community. Venture in if you dare and see how many you can count! 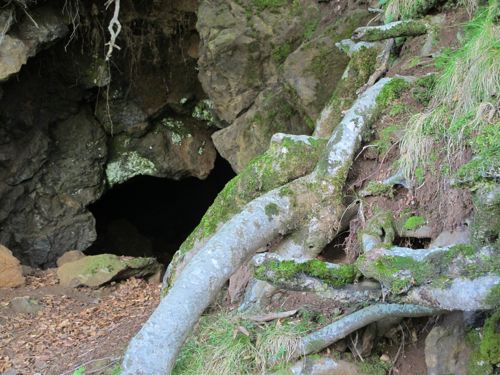 Soon the forest drops below the track and the vista opens. If it’s a cold day, mist will drape mountains that disappear into the horizon in folds of eerie blue.

When shades of ochre, flame and rust start to burnish the dark rock next to you, it means you’re getting closer to the mine. 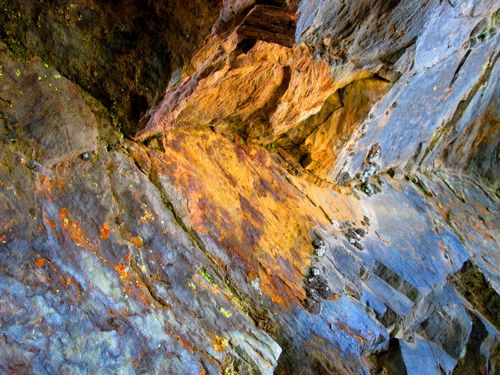 The path splits into an unobtrusive V. If you miss the fork, don’t worry, the plan is to explore both routes as each leads to a possible picnic spot.

Start with the lower path which takes you to two tunnels. Use a torch and explore the one on the left first. You won’t get very far as rockfall blocks the way, but it gives an idea of what the excavating miners did with their rudimentary tools, and your kids will love it.

The tunnel on the right is the way to the mine’s “loading bay” where tons of rock were tipped from above, to be hauled down the mountain by sturdy Catalan donkeys. Trees now soar inside its walls but you can still see many of the old metal stays and hinges. 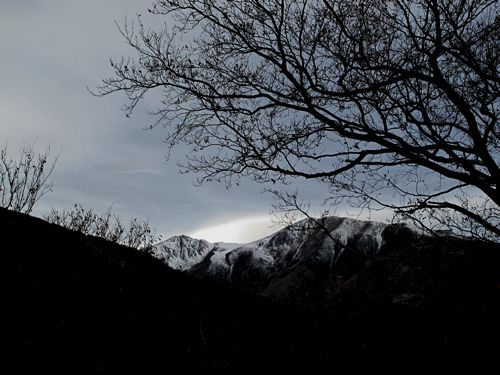 Scramble right through this building to the other side, and if you don’t have out-of-control kids or pets, and you’re not scared of heights, picnic on the edge of the terrifying cliff that slices down to the Lentille River. For the less brave, backtrack to the fork in the path and take the higher track, the official “chemin d’enfer” continuation.

A wide plateau, complete with a metal, albeit rickety, fence awaits your picnic blanket