Roman Emperor Claudius II wasn’t against a bit of love in the ranks, but actual marriage was forbidden in his army, as he believed that ma

Along came Saint Valentine, patron saint of lovers, but also of bee keepers, plague victims and epilepsy sufferers! (It’s a hard job but somebody has to do it!)

Anyway, according to legend, our Val, worried that soldiers would nevertheless abuse their Christianity by indulging in the sin of extra marital nooky, performed secret wedding ceremonies to encourage them to remain faithful Christians.

Caught out by Claudius, he was imprisoned and later beheaded for his sins on February 14, 270 AD.

Some say that the first Valentine’s day card was sent by Saint Valentine himself from his prison cell, a letter of love to his jailor’s daughter, signed ‘From your Valentine’.

In fact, the oldest existing Valentine card recorded was written in 1415 to his wife, by Charles, Duke of Orléans, also from a prison cell. Just 21 years old, the French nobleman was captured at the Battle of Agincourt, during the Hundred Years War, and imprisoned in the Tower of London.

Here it is, its ‘olde worlde’ spelling adapted for the modern reader:

(I am already sick with love,
My very gentle Valentine,
Since for me you were born too soon,
And I for you was born too late.
God forgives him who has estranged
Me from you for the whole year.

I am already sick with love,
My very gentle Valentine.

Well might I have suspected
That such a destiny,
Thus would have happened this day,
How much that Love would have commanded.

I am already sick with love,
My very gentle Valentine.)

Of course, sceptics may say that the Valentine’s card was invented by the greetings card industry!

…..that there is a little village called Saint Valentin in Indre, in the Val de Loire? 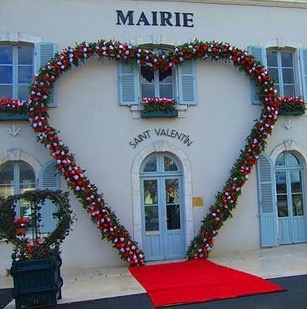 This otherwise unremarkable village markets itself as ‘le village des amoureux’, and between the Jardin des Amoureux, le Saule aux Coeurs, and the Maison des Amoureux, love struck couples are spoilt for choice. Visit the annual festival of love around St. Valentine’s Day, renew your vows in the church, attach your names to the tree of eternal hearts or sip champagne in the lovers’ gazebo. Love is indeed a many splendoured thing.

Messages for Your Valentine Card

FIND OUT MORE ABOUT THE FRENCH LANGUAGE OF LOVE