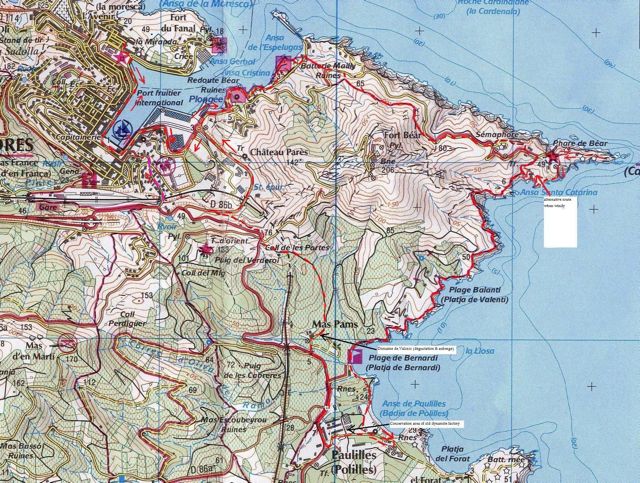 From La Place de l’Obelisque in Port Vendres walk along Quai Pierre Forgas past the fishing fleet and moored yachts in the marina and round the quai to the opposite side; Quai de la Douane Republique to the side of the Commercial Port. 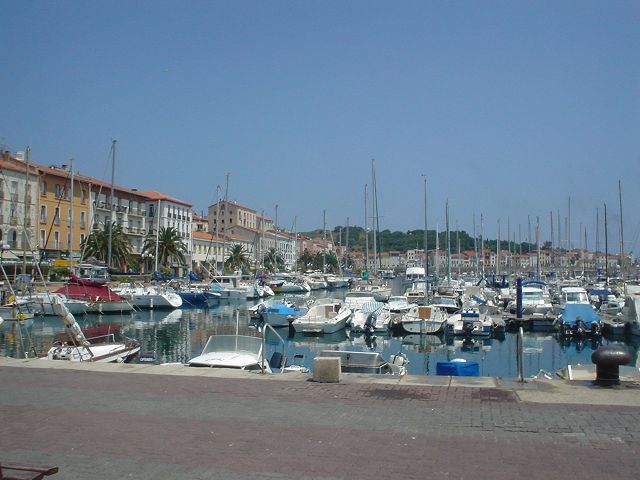 Sadly, this drab 20th century construction is a replacement of the one destroyed in 1944 by the retreating German army who felt it necessary to sack everything on its departure.

Having hugged the perimeter fence at the back of the Port du Commerce, take the left fork (Avenue du General Leclerc) heading back towards the harbour shore and along Route de la Jete where the road follows the rocky shore past the Anse des Tamorins and then immediately before the tunnel take the road going up the hill on the right; Chemin du Cap Bear.

As the road winds up, quickly coming into view is one of the original sea defences of Port Vendres, the Redoute Bear on the left standing proudly on a promontory overlooking the bay. This museum built in the 18th century, houses exhibits from the history of Algeria and a memorial to Sidi Ferruch. 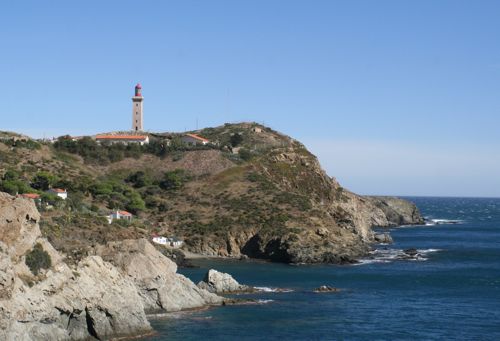 As the road winds along the rocky hill, a ruined fortress comes into view just in front and below (Fort Mailly), another of the defences of the town – a popular topic for Charles Rennie Mackintosh to paint.

Visible from all around and crowning the massive hill of Cap Bear at 200m is the Fort Bear dating from 1895 and still a serious military installation used by the French Army today.

The Chemin du Cap Bear twists steadily around the perimeter of Cap Bear and offers stunning views back over Port Vendres to Pic Canigou and the Corbières in the distance. 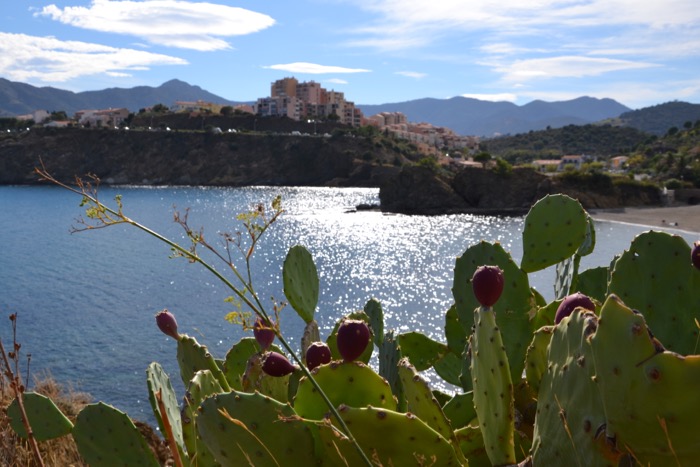 Also from here the twin Tours de Madeloc and Massane sit on the immediate skyline, whilst the craggy coastline is dominated by the two lighthouses of the Feu de Mole (1869) at the end of the Jetee on the near side and Vauban’s Fort Fanal (1700) on the opposite side of the harbour mouth.

At a number of points along this road Charles Rennie Macintosh painted local scenes which are displayed at each vantage point.

The road runs around a headland as Port Vendres disappears but very soon the Semaphor (1895) and Phare de Bear (1902) come into view.

Along this route,  there are occasional yellow flashes painted on the rocks; these are the  ones to follow. Immediately before the locked gates of the Phare which contains an exceptional red marble spiral staircase but sadly not visible to the public, (whatever happened to classy staircases?) on the right side of the road are stone steps leading down to a tiny secluded creek between ancient cacti and succulents of all varieties. 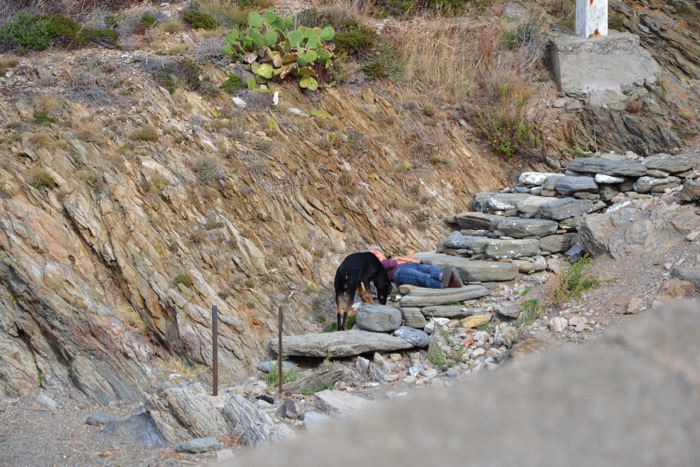 The lower part of this path is rugged and care must be taken, but the effort is well worth while for at the bottom is Anse Ste. Catherine’; a tiny beach with a dozen fisherman’s cottages huddled around it – totally inaccessible by road. This track down is the suggested alternative route for accessing the coastal path on windy days.

For the more confident walkers the regular path strikes off on the East side of Phare de Bear with an initial branch line leading down to the rocky prominence jutting out into the Mediterranean, littered with concrete gun emplacements and search-light bases from German Occupation as if a memorial for all to contemplate the horrors of war that should never be forgotten and home now to countless sea birds.

Returning back up from this lonely place pick up the path again to the left of the Phare but take care – it would seem it drops off the side of the world and precariously clings to a rusty fence as it descends literally over the rugged cliff face.

When at the beach, the path lifts up again between the houses and emerges through more mature cacti, over rocky out-crops on to a strictly coastal edge track. 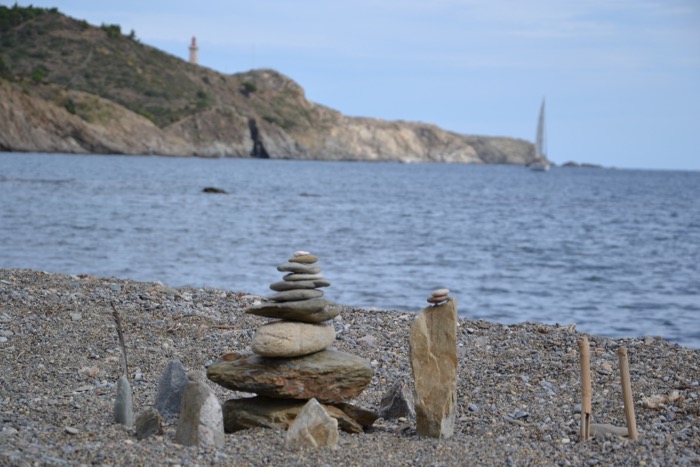 This is not for nervous or physically challenged walkers, particularly on windy days but it is a beautiful and bracing walk along some of the most spectacular coastal cliffs winding in and out and up and down.

There are a couple of beautiful and isolated beaches that are crossed (the larger cove being called Plage Balanti) which after only a small dstance in between settles on a wide smooth one (Plage de Bernardi) accessed by road from the RN114 and where in summer months refreshments can be obtained from Sole Mio – oh, yes! There are toilet facilities here.

It is worth passing the length of this beach, (still with its World War II Teutonic concrete defences) and then up over the small densely wooded headland to the next beach, Anse de Paulilles. 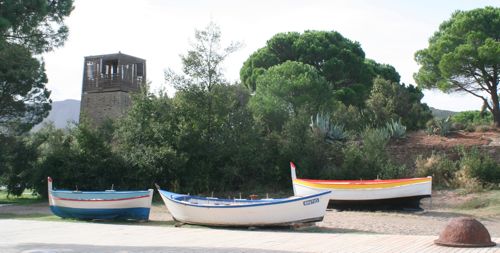 After the brutal defeat of France during the disastrous Franco-Prussian war of 1870, the Minister of the Interior & War, Gambetta instructed Paul Barbe, (a protégé of Albert Nobel) to construct a dynamite factory.

He stipulated that it should be built on a  site with a bay with a river, wells to wash the nitroglycerine, proximity to a port and  desolate so that it would not endanger lives – if there were an explosion! 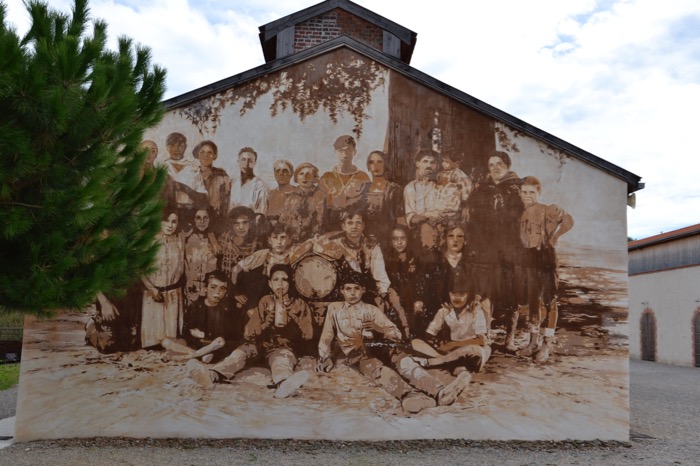 It was prosperous and employed between 300 and 400 workers, suffered occupation by the Germans during the war and now, after many years of dereliction, has been turned into a developing and imaginative conservation area encouraging artisan creativity. (See “Site classe de Paulilles” published by Conseil General www.cg66.fr 04.68.95.23.40) 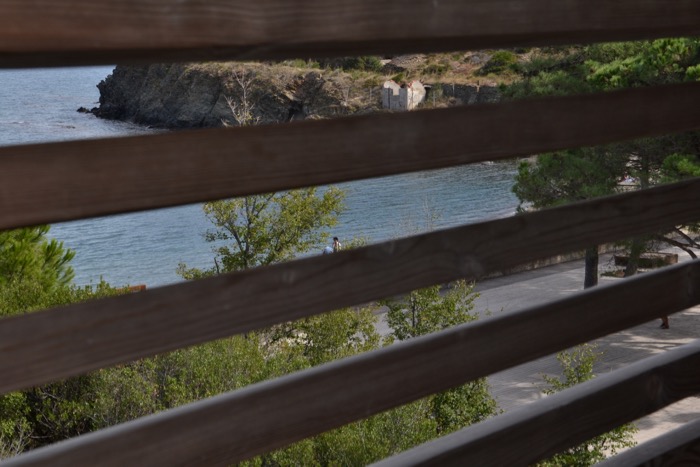 Whether the path is re-traced back to Plage Bernardi and up the track to the main road or the Park is left by the main gate on the RN114, is a decision for the walker but from here it is suggested to head North again and progress to Domaine de Valcros on the N114 main road.

This Domaine (marked on the map as Mas Pams) is a well respected wine producer being part of the Chateau de Jau at Cases-de-Pene and during the summer months, rooms, meals and a degustation are on offer here.

Enter the main gates and immediately follow the sign for Chambres d’Hote but then proceed to the right of the farm buildings turning up a wide farm track that ascends the hill. Almost immediately there is a fork in the track so be sure to take the left limb (marked with a blue ‘L’ flash) which eventually brings the walk out for about 20 metres on the RN114 close to the col.

Once Port Vendres comes into view, the small road to the military zone on the peak of Cap Bear leaves on the right and then immediately another track descends down just below the road which joins the road leading down to the Port du Commerce side of Port Vendres.

Follow this round beneath the precarious ruin of Chateau Pares on the right (a mysteriously compulsive and derelict shell  of more glorious days and one suspects wartime tragedy) and return to Port Vendres around the port.