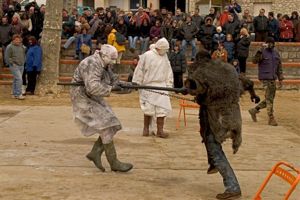 The Saint -Laurent bearfest is based around age old traditions.

In the past, the young men of the mountain villages of the Pyrénées would attempt to capture a bear at this time of year, in order to prove their bravery! The time of year was well chosen, the bear being weakened by long months of hibernation.

The tradition continues to this day, but now it is the young people of the village who dress up as bears and the capture is purely symbolic. On Sunday 15th, at 14h, a young man is dressed up as a bear in secret. Until 1992, the costume was made out of goat skins sewn together, but now a real bear skin is imported from Canada and the old goat skin bear outfit is on display at the Saint -Laurent Museum. An even earlier example of this type of costume can be seen at the Casa Pairal in Perpignan. 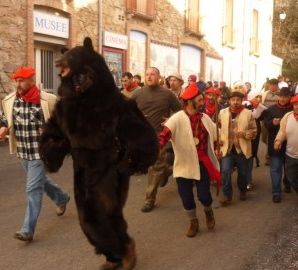 At 15h, the bear is ready. He comes out of his cave, abducts a young girl and carries her off to the forest. The whole village joins in the hunt, captures the bear.

The ‘meneur’ or leader leads the bear through the street on a chain, and recites the catalan poem ‘La predica de l’os’ which describes how bad is the bear and how brave is the hunter. The bear dances to cobla music, tries to escape – the macho meneur wins the stuggle, takes him to the place, shaves him…… The bear ‘dies’, lies on the ground for a short time, then leaps up again with a human face and is allowed to choose a young lady in the crowd to finish of the event with the ritual dance.

Other strange things go on during the day! Watch out during the procession for the ‘monaca‘ a strange monster with two bodies, two heads and four pairs of legs, who represents the end of winter and the arrival of spring and terrorises young girls and children in the streets. Keep an eye out also for the ‘escalfador‘, a copper bowl in which pig’s hair is burnt, causing a very unplesant smell. This is carried by two young people disguised as old people whose aim is to quiely slip the bowl under the skirts of the young girls and women!