Up to 4 months maternity leave, free health care for all, government-funded crèches and écoles maternelles, and a medal for having four children or more (yes really, read on)…. What a joy to be a lady and Maman in France.

But that’s not all. A mother of three is labelled “Famille Nombreuse,” and on top of generous child support, is entitled to a further subsidy of up to 500 Euros a month if she chooses not to return to work, AND reduced admission to museums and amusement parks…. And did you know that a woman with four children ‘qui a élevé au moins 4 enfants de nationalité française’, is eligible for the ‘médaille de la famille,’ an honorary medal from the French government? Yes, really!

In fact, everything possible is in place to support and encourage French ladies to stay at home and have babies!

Not surprising then, to hear that France doesn’t do at all well in the world rankings of gender equality in the workplace, tottering in at an alarming 57th position behind most other European countries, the United States, Jamaica, and Russia.

Macho attitudes and prejudice at work, unequal pay (women earn on average 17.9% less than men), reluctance from banks to lend business start up funds (Who knows? She might change her mind and go have a baby instead!) mean that setting up business in France is an uphill battle for a woman.

And yet, despite all this, the number of female bosses in Europe is on the increase. As Aretha Franklin sang, “sisters are doing it for themselves”.

To be successful as a woman, you have to be twice as good as a man. But that’s OK! Many are! 🙂

We spoke to some of the ‘Femmes Formidables’ of the P-O. 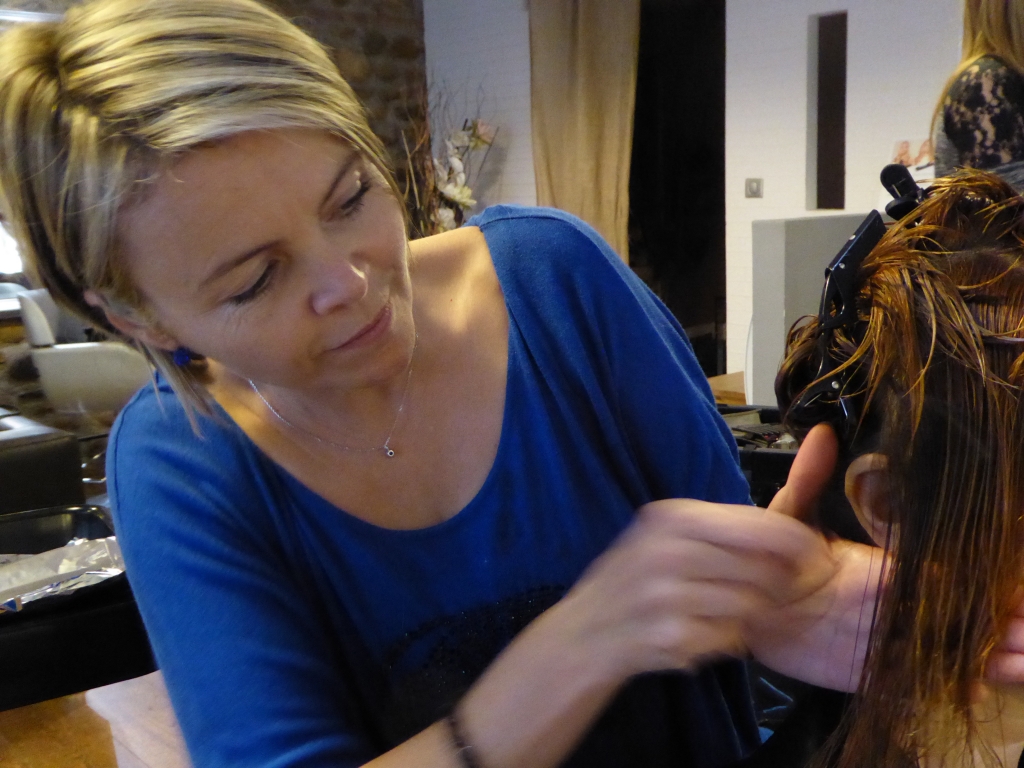 Bubbly Sam is an Essex girl with a ready smile and a warm welcome for all. She opened her own business five years ago and manages to balance a successful working salon with a busy family life. “The hardest part is the paperwork” she tells me with a wry grin. She particularly enjoys having English speaking clients in her salon as it’s one of the only times that she actually get to speak English! 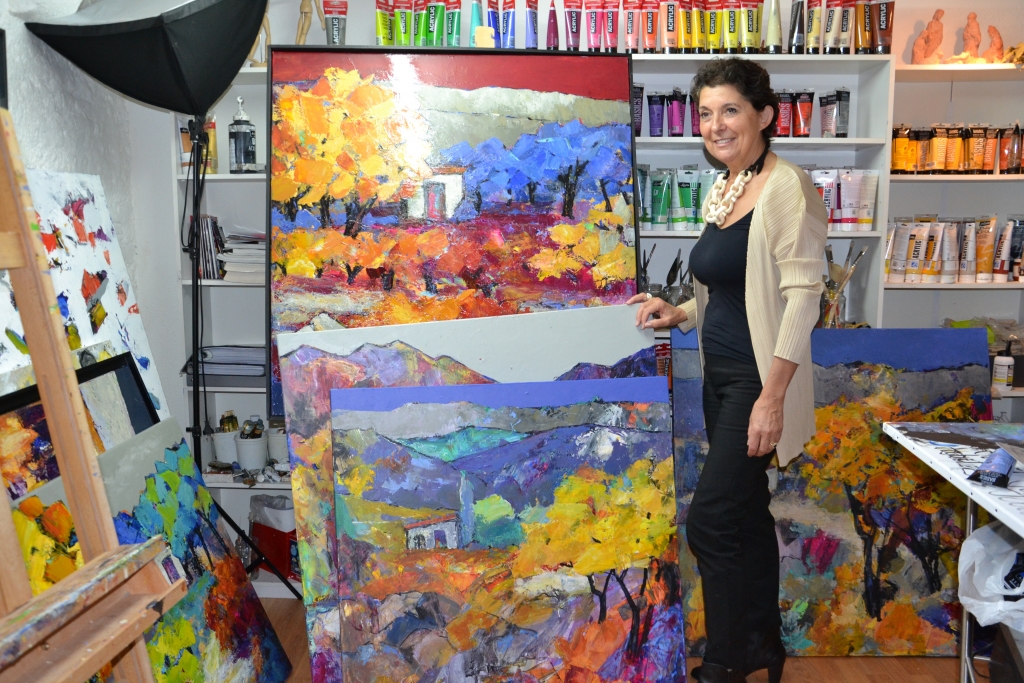 “Je peins depuis toujours” Véronique Joguet tells me as we sit soaking up the radiant colours of her bright and spacious gallery in the centre of Perpignan.

After painting for her own pleasure for 30 years, it was time to share her passion for colour with the world. The Atelier Galerie Véronique Joguet off the rue de l’Ange started out a ruin. Totally renovated by Véronique, it is now an oasis of calm, a perfect backdrop for the explosions of colour that burst from her paintbrush. It is also her workshop, her own personal space, where ideas transform into creation.

Véronique sets a theme – Collioure, Paulilles, the vineyards of Maury, Fenouillèdes, Terre de Vigne et de Contrastes… and tells its story in a series of different textures and colours. Always bright. Always joyful. Exuberance, energy, light and heat of the Mediterranean to keep you warm over the winter months to come. 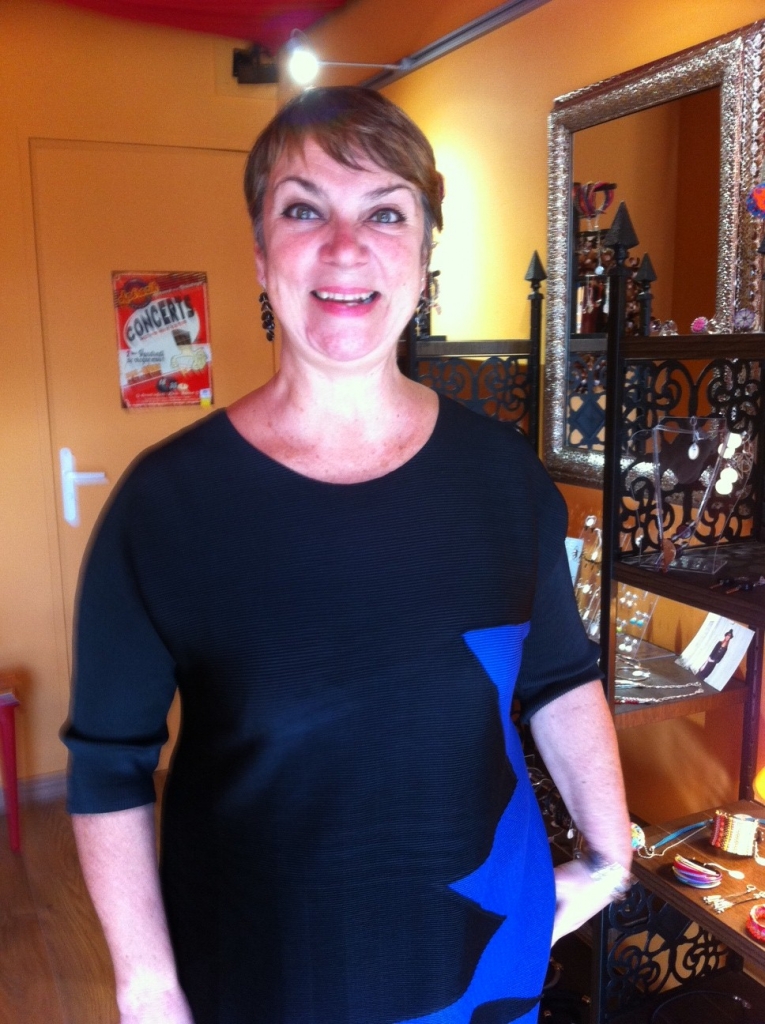 Tucked away at the back of the Place Erik Satie opposite the port of Saint-Cyprien, Elisabeth Delannoy has created a little jewel of a boutique, following a lifetime fascination for quality designer costume jewellery.

A regular visitor to craft markets throughout France, Elisabeth’s flair and good taste have led her to some exciting and original discoveries created out of an incredible range of materials.

It’s an uphill struggle to keep a shop going out of season in a coastal resort, especially when the streets are deserted.

If you fancy treating yourself or if you’re looking for that special present for birthdays, Christmas or St Valentine’s, pop into this quirky liitle shop and see if you can find some treasure.. 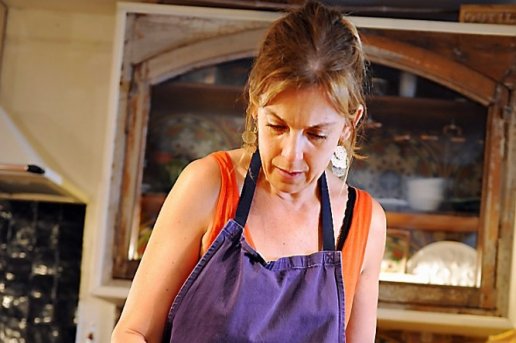 Running three businesses, the tapas bar La Cuisine in Collioure, a catering business and cooking courses, Victoria Robinson describes herself as “a project machine”. Ellen Hall asked her how she does it all?

Hard work and single-mindedness helps. In 2004 she started a catering business and then opened the tapas bar the next year. The cooking courses were added in May of this year. Her colourful tiled kitchen with a large table running down the middle provides plenty of space for would-be cooks to learn new skills and to collaborate in creating a meal. (More details about Victoria’s courses to follow in a future article.)

Many of the people from whom she buys her ingredients are what she calls “recycled professionals” (a banker turned winemaker, a fireman who raises cattle) – people following a passion. Not unlike Victoria herself. We all know how difficult it can be to slice and dice your way through French administration. 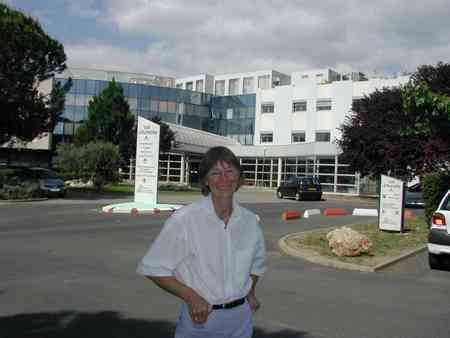 If you were to tell Penny that she was ‘formidable’, She would shrug it off with a ‘don’t be ridiculous’ smile, and move on quickly to the next item on the agenda. But the many people in and around the P-O that Penny has helped, both practically and spiritually are a testament to this kind and competent lady.

She learnt about the excellent French Health System up close and personal when she was diagnosed with breast cancer in 2006. Despite a high standard of care, she was aware that limited French speakers needed support in this most difficult of situations. Learning about CSF, she started off as a volunteer coordinator and went on to become president.

Penny is a non-judgemental ear, a shoulder, a chauffeur, a hospital and home visitor, a translator, a tea maker, a fund raiser, an organiser, an advisor….and a femme formidable in every sense. 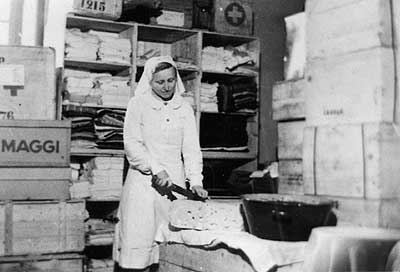 Friedel Bohny-Reiter worked for the Swiss Red Cross at Rivesaltes internment camp from 1941 to 1942. Touched by the misery of the interned Jews, Spanish refugees and Gypsies, she did what she could to improve their lives, handing out extra food, organizing activities for the children and providing medical services.

When the deportations began in August 1942, she smuggled Jewish children out of the camp to children’s homes, one of which was in Chambon-sur-Lignon in the Auvergne, whose inhabitants protected some 3000–5000 Jews from the Nazis between 1941 and 1944. The home was run by Auguste Bohny, later to become her husband.

Thanks to this brave young woman, many children were saved from certain death in the extermination camps in the East. For her efforts, she was decorated ‘Righteous among Nations’ in 1990.

Friedel kept a diary which was published fifty years after its creation, noting down daily her experience of the camp: hunger, fear, despair. Despite all the hardship, she wrote on December 15th, 1941 ‘These children’s eyes are the reason I stay here’.

With support from MI9, and famed Colditz escapee Airey Neave, she helped 400 Allied soldiers to escape from Belgium to Gibraltar, personally accompanying more than 118 airmen over the rugged Pyrenees herself.

Betrayed, captured and tortured in 1943, she was sent to Mauthausen and Ravensbruck concentration camps until, desperately ill and undernourished, the allied armies liberated her in 1945.

After the war, she was honoured by Britain, Belgium and America and made a Belgian countess in 1985. 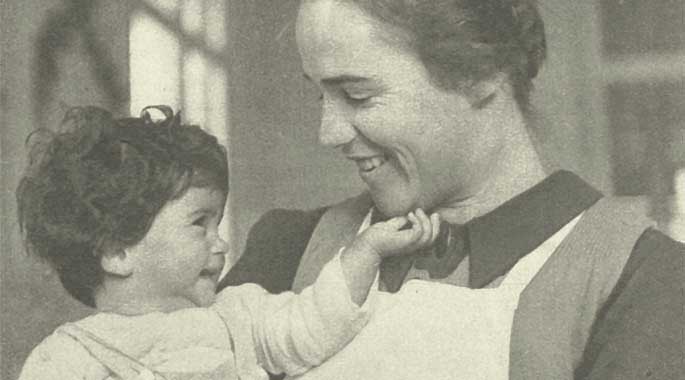 Elisabeth Eidenbenz was the daughter of a Zurich pastor, who volunteered with the Asociación de Ayuda a los Niños en Guerra (‘Association to Aid Children at War’), in the South of France. Appalled by the situation of mothers and children amongst the Spanish refugees pouring across the border, Elizabeth obtained a grant from the Swiss Red Cross to convert the abandoned château of the Bardou-Job dynasty near Elne into a maternity home.

When the Germans occupied the ‘Free Zone’ in November 1942, the Gestapo came to La Maternité looking for Jews. Elisabeth resisted whenever possible, despite the “strict neutrality” imposed by the Swiss Red Cross, ordering her to “give up Jews, Tziganes and Spanish refugees if requested and do nothing to shield them from the roundups.”

It is estimated that she saved up to 600 babies.