Symbol of Catalan resistance during WW2, the village of Valmanya on the CD 13 coming from Vinça, was totally destroyed by the Germans in August 1944, not long before the liberation, in reprisal against resistance fighters operating in the area .

This was a joint operation by the Nazis and the ‘Francs-gardes de la Milice des Pyrénées-Orientales et de l’Aude’, the local militia, to clean up resistance and maquis  presence in the  area. It followed an attack by the resistance group on a bank in Prades, and the successful theft of funds to finance their activities. Unfortunately, they took three hostages, one of them German, another a member of the local militia and a civilian. All three were ‘tried’ and executed.

Most villagers, warned in advance of their arrival, fled to the safety of the mountains. Those who were unable to do so, two elderly villagers and two Spanish republicans, were tortured and machine gunned. Animals were slaughtered and the village was pillaged and burned to the ground. A pregnant woman in a nearby, isolated Mas was repeatedly raped, but ultimately got away with her life. 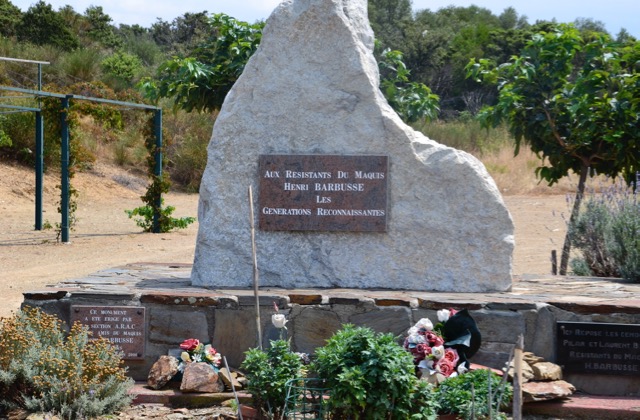 From this ‘maquis’ stronghold, Captain Julien PANCHOT, later to be brutally tortured and killed, led brave resistance fighters who sheltered in the nearby mines of La Pinosa and set up the Sainte Jeanne escape route for refugees.

The tiny village has been rebuilt, scars have healed. It is a peaceful place now, almost hidden in the steep valley of the Lentilla. Commemorative plaques remind us that it was not always so.

FIND OUT MORE (In French)