A Story of Courage 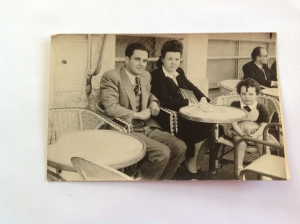 During the occupation of France in World War II, there were many tales of courage and tragedy. Here is a friend’s story.

In 1943, when the Gestapo came to Prades, Jean-Michel’s father was fighting with the Resistance and frequently absent.

The worry was too much for his wife and six months into her pregnancy, she miscarried.

At just 1 kilo 30, Jean-Michel was not expected to live. His mother was very poorly, and he was placed in a shoe-box, lined with gauze, and set at the side of the stove whilst the midwives turned their attention to saving the mother.

It was therefore quite a surprise when a noise was heard – the baby was alive! And this despite the poor medical care and facilities of the war years

These were hard days. Food was short, fear a constant. And there were enemies within! Jean-Michel was two months old when his absent father was betrayed by an unexpected source, a family member.

One night the Gestapo came storming through the house, searching and terrifying the family. The shock was too much and Jean-Michel’s mother could no longer breast-feed, a calamity when food was a problem and there was not even powdered milk.

Nurse  to the rescue.

The nurse  knew of a woman in the town who had recently given birth to a baby boy called Christian. Would she help in this desperate situation? She was approached and she agreed to save Jean-Michel by nurturing him as well, thus making him a milk-brother to her son.

Unaware of this family upset and having been warned in advance of his denunciation, Jean-Michel’s father had fled. His escape route was through the Pyrenees, his destination Barcelone.

He was part of a small band but it was not safe. To find their way it was necessary to trust the few shepherds, farms and villages they came across. They needed food and above all, advice on the German patrols searching for escapees. There were no guarantees the group would not be betrayed. Capture meant torture and death.

During this perilous journey, Jean-Michel’s father had no idea what had befallen his family, and the family had no notion of his whereabouts and bravery. As a Resistance fighter, he planned to join the French army in North Africa – but his courage had not gone unnoticed. He was needed.

At Barcelone he was approached and recruited by the French Consulate. In Toulouse, a Resistance Organization known as Reseau Morange and part of the French Secret Service were smuggling people at risk out of France – among those being rescued were allied British, French and American fighters, famous French families, high-ranking officers. The dangers were immense. By the end of the war and within this organization, ninety percent of them had been killed.

For Jean-Michel’s father, the first two traverses were the worst. He was caught on the second crossing, not by the Germans but the Spanish Police and for two days he was imprisoned Figueras. Luckily, he had contacts in the French Consulate and they managed to free him and bring him to Barcelone, and the rescue missions began again.

Many times he crossed and many men were brought to safety. He was awarded the Croix de Guerre, the American Star and the D.S.O. signed by Winston Churchill.

The war ended but Jean Michel’s father was still needed. He was approached by a Governmental department to help hunt down escaping Nazis. This he did.

To his joy, his wife and two year old son joined him in Barcelone. Jean-Michel was too young to remember the emotions which must have accompanied this longed-for moment, that wonderful meeting after all the dangers. He was told of it later, of the sudden lifting of long endured hardships, the wonder of a nice home, of enough to eat. It was an unbelievable turn-about!

There was a downside. Jean-Michel’s father was not happy. The task was a distasteful one. He was expected to hunt down escaping Nazis who, when caught, were killed and buried. He now felt he belonged to an organization who had become killers.

Although afraid, he decided to leave and secretly departed, with his family, for Prades and the home of Jean-Michel’s grandfather.

One day, he saw an advertisement in Le Monde for construction workers in the Colonies. He showed it to Jean-Michel’s mother: “Let’s go”, she said!

Within two weeks he had an initial two-month contract for work in Togo. They stayed for twenty years and long enough to cancel any ties with the Secret Service!

Here they had a sense of freedom and togetherness, happy until schooling became an issue. Primary education in the Colonies was fine but this was not the case for further schooling. Jean-Michel left for boarding school and then on to Perpignan University. Eventually and no doubt with joy, his parents returned to Prades. At last they were home.

In Jean-Michel’s heart, lies a deep pride and a treasured memory of his wonderful father.