As you head up the N116 towards the high Pyrenees after Prades, the Têt Valley narrows dramatically where it meets the valley of the Cady, and the perfectly preserved fortified medieval town of Villefranche de Conflent whisks you back thousands of years in time.

At the confluence of the rivers Têt, Cady and Rotja, Villefranche was built and fortified at the end of the 11th century by Count Guillaume Raymond de Cerdagne, to protect the valleys from invasion. It was later reinforced by Vauban in the 17th century. 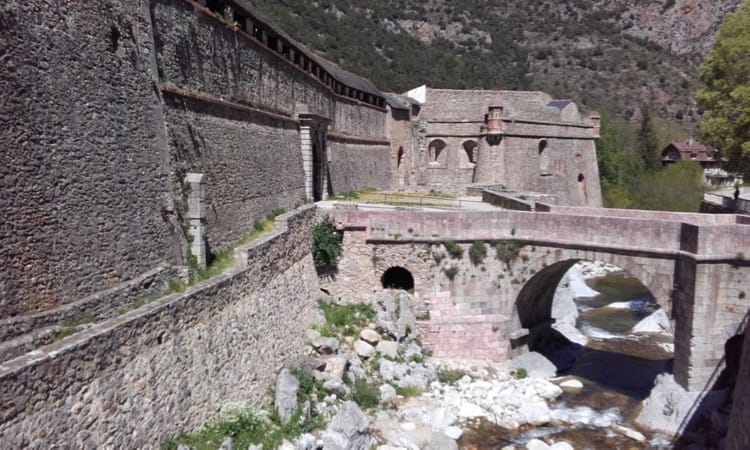 Known also as Villa Franca, town of free trade, special tax privileges were offered to attract skilled and assorted trades people. Settlers could live tax-free for three years, after which they could pay as little or as much tax as they wanted, whenever they chose. All right for some!

Today, Villefranche is a World Heritage Site, and deservedly classified among the most beautiful villages of France.

Enter the town by one of two ancient gates, the Porte d’Espagne or the Porte de France. Originally built into the valley bottom, space was limited in Villefranche, so the houses are tall and narrow and there are just two main pedestrian-only streets, Saint Jacques et Saint Jean. An enchanting glow comes from the famous pink-coloured marble, mined in the area and used in much of the town’s construction. 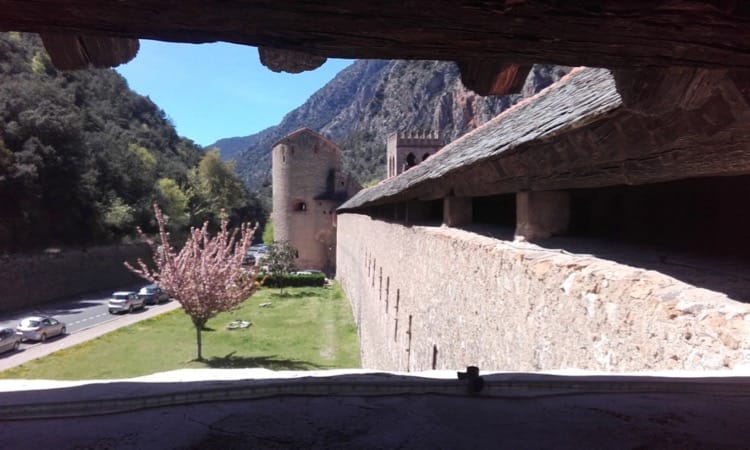 But never fear: although you may well be bewitched by the town itself, these dolls are supposed to bring good luck and protection, so you can put the pins away! 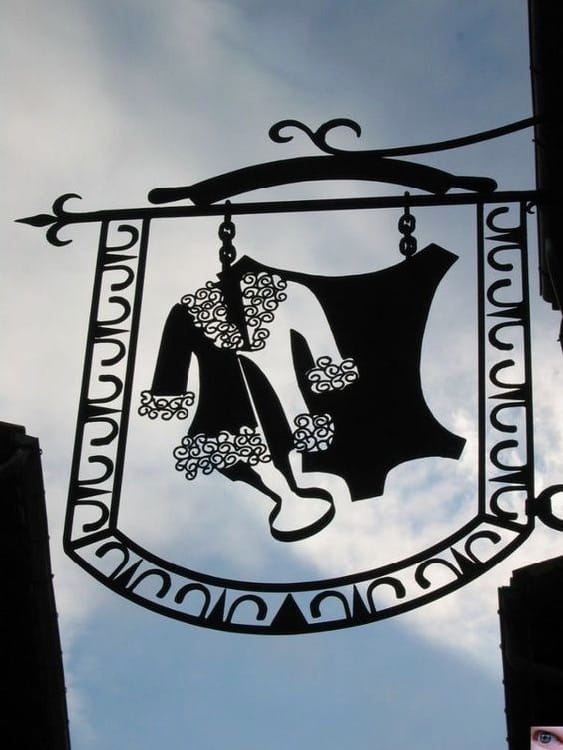 As you wander the streets, look up at the fascinating shop signs, forged from local iron.

As the warmer weather arrives, grab a coffee or a cold beer and settle down in one of the squares at either end of the town to take in the magical atmosphere…and if you’re around at Easter weekend, look out for the annual Fête des Géants, and the ‘Goig dels ous de xocolat. Giants parade through the streets accompanied by musicians playing Catalan instruments (gralles, flaviol and tambourin) and asking for chocolate eggs from the inhabitants in exchange for their music. What a treat. 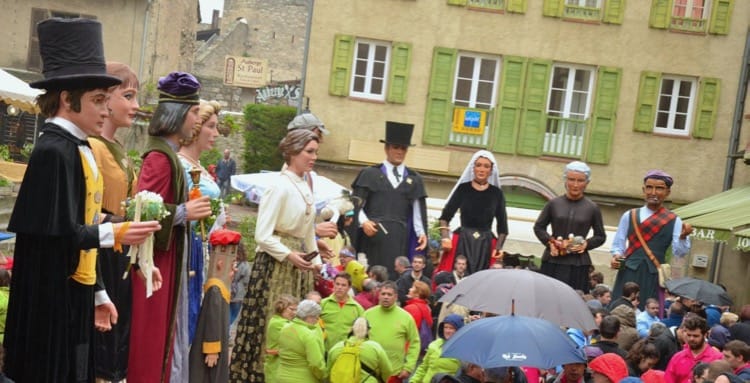 First built in the Middle Ages with a tunnel running around the walls, Villefranche-de-Conflent city walls were transformed by Vauban during the 17th century, when he added another level with a traditional slate roof. Walk round alone, or with an audio guide. It’s well worth the small fee.

If you’re interested in history and military architecture, you won’t want to miss Fort Liberia, perched above the town, and dominated by Canigou.

One way up is via ‘Les milles marches’. This underground staircase was built in the reign of Napoleon III in the nineteenth Century. Twenty-two men fell to their deaths during its construction. Steep, narrow and dimly lit, it is cooler on a hot day but might not be the best option for those with claustrophobia or bad knees! 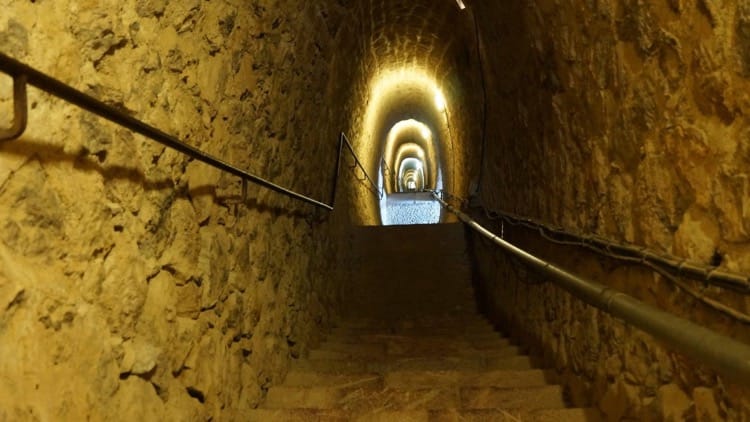 There are 1279 steps – including those in the fort itself so give yourself at least 20 minutes for this climb! Or perhaps come back down this way, bringing you out where the little Yellow train passes the fortified walls of Villefranche on the start of its climb to Latour de Carol.

Alternatively, you can walk the steep open pathway, with its stunning views over mountain and valley, or you can take a shuttlebus from inside the town walls.

Inside, you can buy tickets or a guide, available in English, and drinks, snacks and loos are available.

Built in the same impenetrable pink marble as much of the town, with defensive interior walls of soft brick to absorb cannon balls, and internal corridors within massively thick outer walls from which to fire on attackers, the defenders of Fort Liberia were well equipped to repel invaders from both sides of the border.

There is plenty to see and explore, including La Prison de Dames with its horrible history of female prisoners. The Marquise de Brinvilliers was found guilty of poisoning her father and brothers, imprisoned in the fort and eventually burnt at the stake. Her lady-in-waiting, Anne Guesdon, and another alleged lady poisoner, La Chapelain were imprisoned for the remaining 36 years and 43 years of their lives respectively, chained to the wall of their cell. Wax models of them sit there still.

Fort Liberia is still occupied by military personnel. The National Commando Training Centre trains special forces just up the road in Mont Louis and they can be regularly seen on manoeuvres in full combat dress, so don’t panic if you’re approached by masked men in full camouflage when out walking in the Conflent!

WHERE TO EAT IN VILLEFRANCHE

Small but delightful animal park, home to lions, bears, monkeys, a llama, deer, and several species of bird. Children and adults alike will love it. Two walking circuits of 2.5 and 3.5 km and picnic area allow you to enjoy both the animals and nature.
www.parcanimaliercasteil.com

Two caves just opposite Villefranche, formed naturally by erosion from water trickling down through the rock. Stalagmites, stalactites and coloured pillars of mineral rock. Take the man-made path through the caves to the auditorium with ‘son et lumière’ (depending on time of year) highlighting the colours of the minerals, to the accompaniment of Strauss, Bach, Casals and Pavarotti.
Not for the claustrophobic. Riverside picnic area, bar and shop on site.
http://grottescanalettes.com

This Benedictine Abbey is a working abbey and you are asked to respect the silence and enjoy the beauty in peace…or stay a few nights if you need a spiritual break.
You can also head down through the woods for a walk up the Gorge of the Cady River, past rock pools and perfect picnic spots.
www.stmartinducanigou.org/en

Just outside Villefranche on the N116 after the level crossing, next to a small shrine, a rocky little footpath leads to the eagle’s nest chapel of Notre Dame de Vie. Stunning views down the valley of the Rotja await if you don’t mind a steep and vertiginous climb of approximately 45 minutes. When you arrive at the chapel it is worth carrying on to the massive cave above it. Easy to imagine prehistoric man surveying the splendid scene spread out below.