with Leigh and Merry Foster

Sometimes, when we’re not walking, we have a lovely day out on the motorbike in this spectacular region. It’s a fantastic way to see the countryside, and get “up close and personal” with the smells and sounds of nature. This is a short circuit we did in November and combined it with a visit to a fascinating old Priory hidden in the hills.

Access : The start point can be anywhere really, ours was the D615 from Thuir towards Ille-sur-Tet. We zipped along past the neat vineyards, fruit orchards (which will be gorgeous with blossom in spring) and villages, turning left onto the D16 in the direction of Bouleternère just after Corbère, until after another 1 km we came to a turn on the left up the D2 to St Michel des Llotes and Casefabre. Here, we left the main road and started up into the hills. 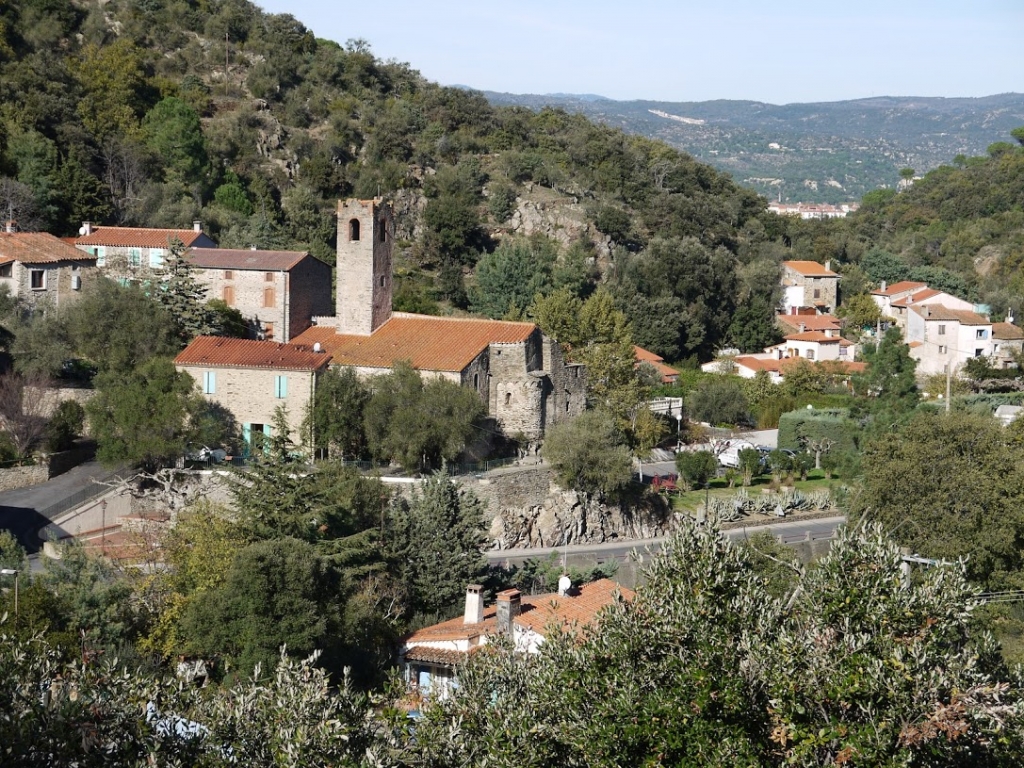 Keep following the D2 with the little dry stream on the left, until you reach St Michel des Llotes after about 1.6km. There is a little museum of Catalan Agriculture here. We didn’t stop but it looks interesting.

Turn right onto the D72 and continue winding up into the hills following the signs to Casefabre. The zigzag warning signs and narrowness of the road tell you you’re now heading off into the wild, and very soon you can look back down the valley over the village laid out behind and below you.

The road twists and turns upwards past isolated farms and houses, in and out of the sunshine and over the Col Sainte Marguerite, until you descend into the tiny hamlet of Casefabre with its 11th century church.

In the blink of an eye you’re through it and continue wiggling downwards into the valley of the El Bolès river, making its way towards the Têt. After crossing the river, turn right on the D618 and immediately turn left on the D84, following the hairpins up the other side of the valley towards the Prieuré de Serrabona.

The road winds its way up 4km and ends at the Prieuré, which was founded around 1069 AD. It fell into disrepair in the 16th century, was designated a historical monument in 1834, and restoration began in the 20th century, and it is now open to visitors from 10 am to 6pm.

Despite its imposing location at 590 m elevation, it looks unimpressive from the outside with its stark grey stone walls, but the inside reveals some astonishing carvings and stonework. 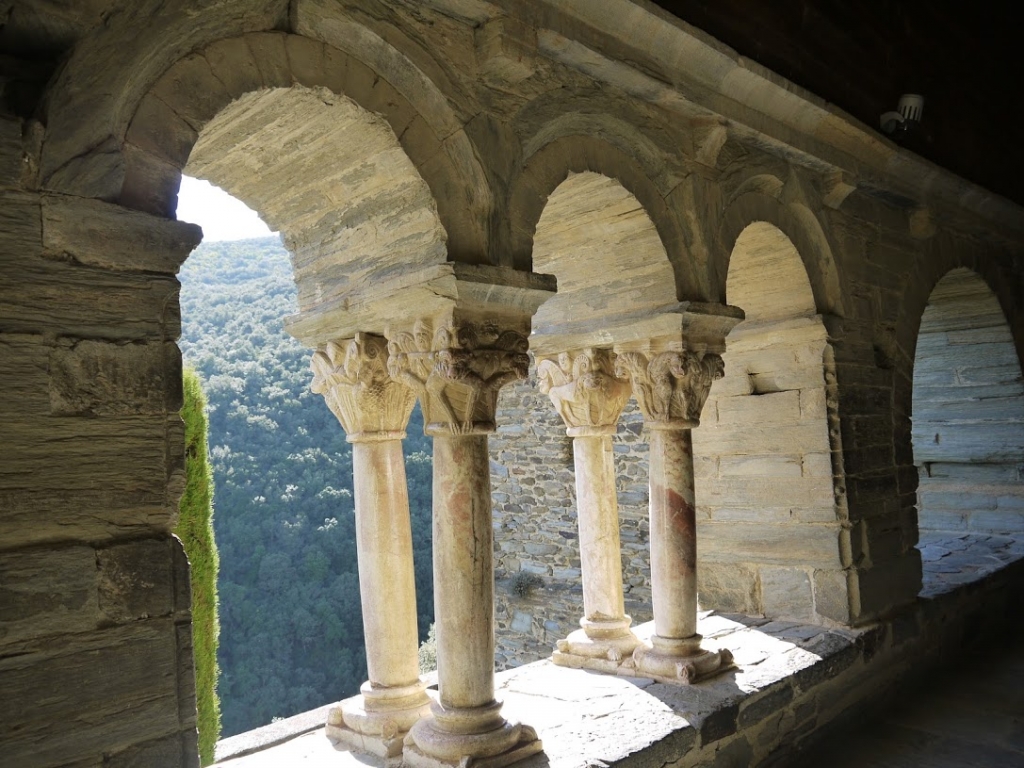 Just outside is an immaculate little herb garden with beautifully tended neat hedges, definitely a place to calm the mind. After paying the €1.50 entrance fee, you enter a cloister with a series of marble columns supporting carved capital stones with fantastic animals and mythical figures. The arched cloister overlooks a quiet garden and due south over the steep and densely wooded valley.

There is a staircase leading from the cloister to the roof of the priory, where the views are even more impressive. Inside the church is the biggest surprise, a strange indoor row of cloistered arches (or ‘Tribune’) beautifully carved out of pink marble, which seems vaguely misplaced and inappropriate for a church, with its rather pagan carvings. In places on the church walls some brightly coloured traces of ancient frescoes can still be seen. 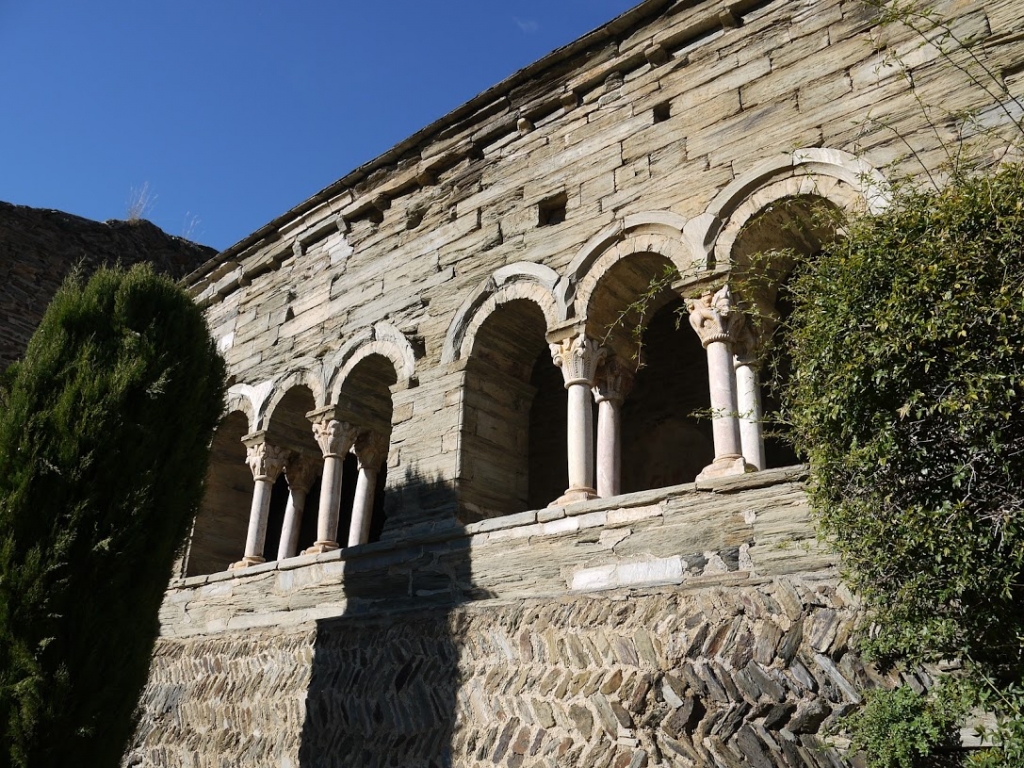 After leaving the Prieuré, the only option is to retrace your route down the hill to the D618. From here you can either turn left towards Ille-sur-Tet or right towards Céret, which is prettier but longer. The road gently winds up the valley with the El Bolès on your left. It’s a quiet road but there can still be some surprises.

On rounding a bend we suddenly came across an untended flock of Mouflons. They weren’t particularly bothered by us, so we stopped and admired their glossy chestnut coats as they slowly moved out of the way of the strange two-headed smoke-puffing monster.

The road continues to meander towards the tiny village of Boule D’Amont, where a bridge crosses the El Bolès, and suddenly you are in even tinier Lo Serrat. Follow the D618 up the valley, each turn revealing more glorious hillsides until you get to the Col du Fourtou, a crossroads where the road turns right.

Continue on the D618 through the charming villages of Prunet-et-Belpuig and La Trinité, perhaps stopping to take in the awesome views down to the sea, then onwards through Saint Marsal, and Taulis to finally reach Palalda, which feels like you’re almost back in the real world again, having seen a genuine piece of the wild P-O.