… with Leigh and Merry Foster

The clever network of signal towers (tours à signaux) that you see on the high mountain tops around the region date back to the 13th century. They were originally set up by the Rois de Majorque as a defence system to protect the Roussillon from invaders and to enable the passing of information around the region, using fire and smoke signals.

The Tour de la Massane or Torre de la Maçana dates from circa 1293AD, and restoration works in the last 25 years or so have seen it rebuilt to almost its full height.

This is a steep walk, which takes 2-3 hours each way depending on your ability. The views are stunning, all along the coast from Port-Vendres to Canet on a clear day, overlooking Collioure and Argeles, and across the plain to the Corbieres in the north. 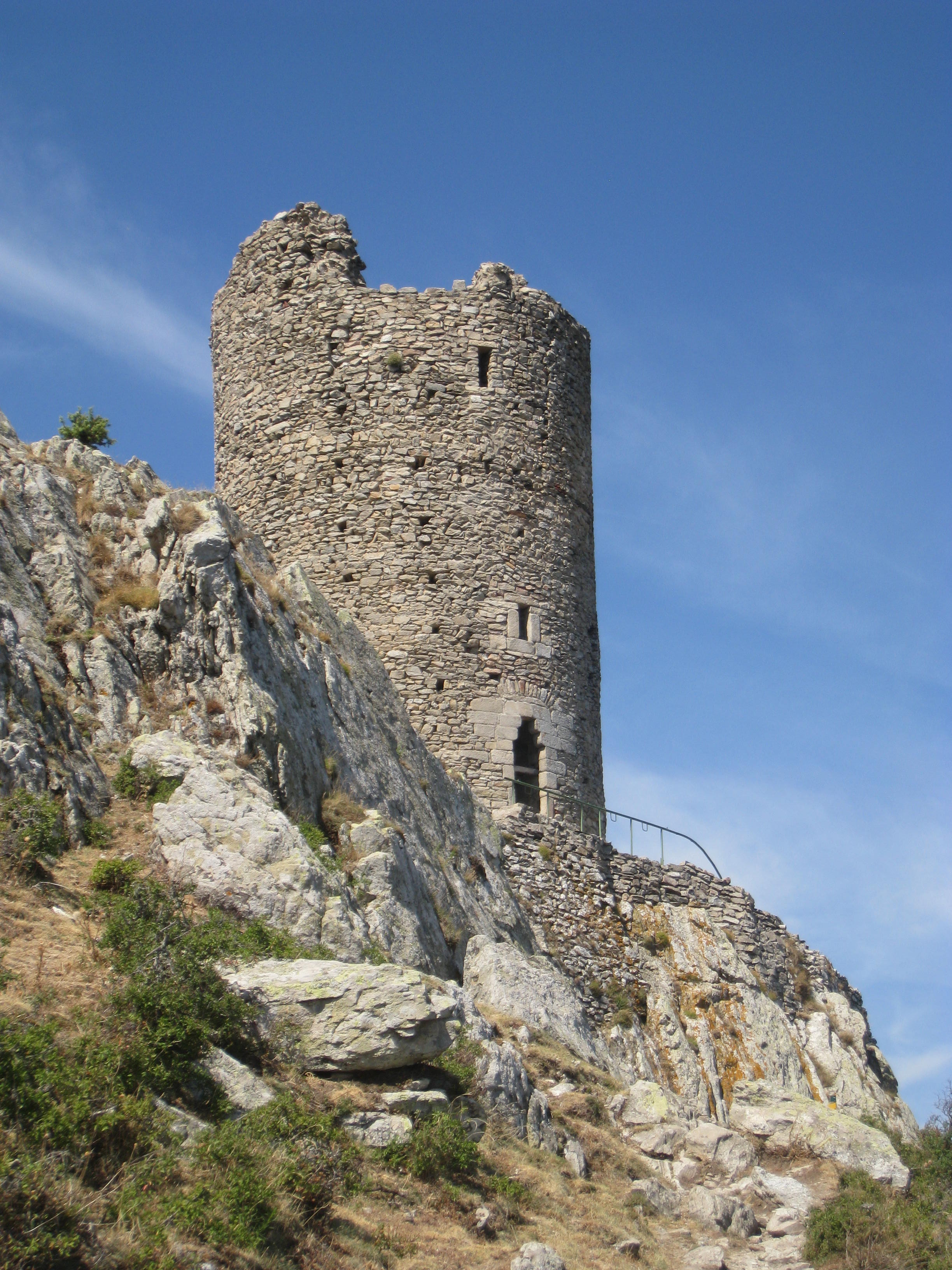 Access : Park either above Château de Valmy (Argelès)  or above Lavall outside Sorede, both at around 230m altitude. From there it is a steep climb (less steep from Valmy) up to the ridge of hills leading to the tower.

If coming from Valmy, make your way up the dirt track to the turn off to Chapelle St Laurent. From there the walking path heads straight up the slope to about 380m alt. where you turn left and
head to the Roc del Grill (501221E 4706520N), 525m alt.

The path is well marked with yellow bars and meanders through the trees with occasional fantastic views down to Valmy and Port-Argeles.

If coming from Lavall the path is shorter but steeper and climbs through the forest with lovely views back down and across the valley. It joins the hill crest path at the Puig dels Oms, a rocky outcrop at 550 m
alt. (501588E 4706081N)

From there the path climbs slowly along the crest of the hill weaving in and out of amazing rock formations and lovely forest, heading south east almost one km to a grassy clearing (502317E 4705604N) 660m alt.

Now you are almost there. The path climbs steeply for a hundred metres or so up to a rocky ridge, from where you can see the tower in all its glory! Beware of the wind which can accelerate up the valley
and be quite strong, even when it’s gentle elsewhere.

The views from the top are fantastic and well worth the climb. From here you can see down to Collioure, Port Vendres and down to the Torre de Madaloc to the south east, one hundred and forty metres lower. Banyuls sur Mer is just behind it, and the Spanish border is just a couple of km to the south

The “Tour de la Madeloc” dates from circa 1285AD, and was modified by Vauban in the XVIIth century. The views are stunning, overlooking Collioure, Port Vendres and Banyuls, and south to Cap Cerbere and the Spanish border.

Another  steep walk, which takes 1-2 hours each way depending on your start point.

Access : The start point is reached from the Collioure bypass N114, take the exit after the one for Le Racou. Follow the track by car up to the Table d’Orientation 505140E 4706076N – 307m alt. Park and enjoy the views from the table and identify places in the distance from the graphic guide. The hills in this area are described as being like a turkey’s foot, with high ridges splaying out from each peak and separated by steep-sided valleys 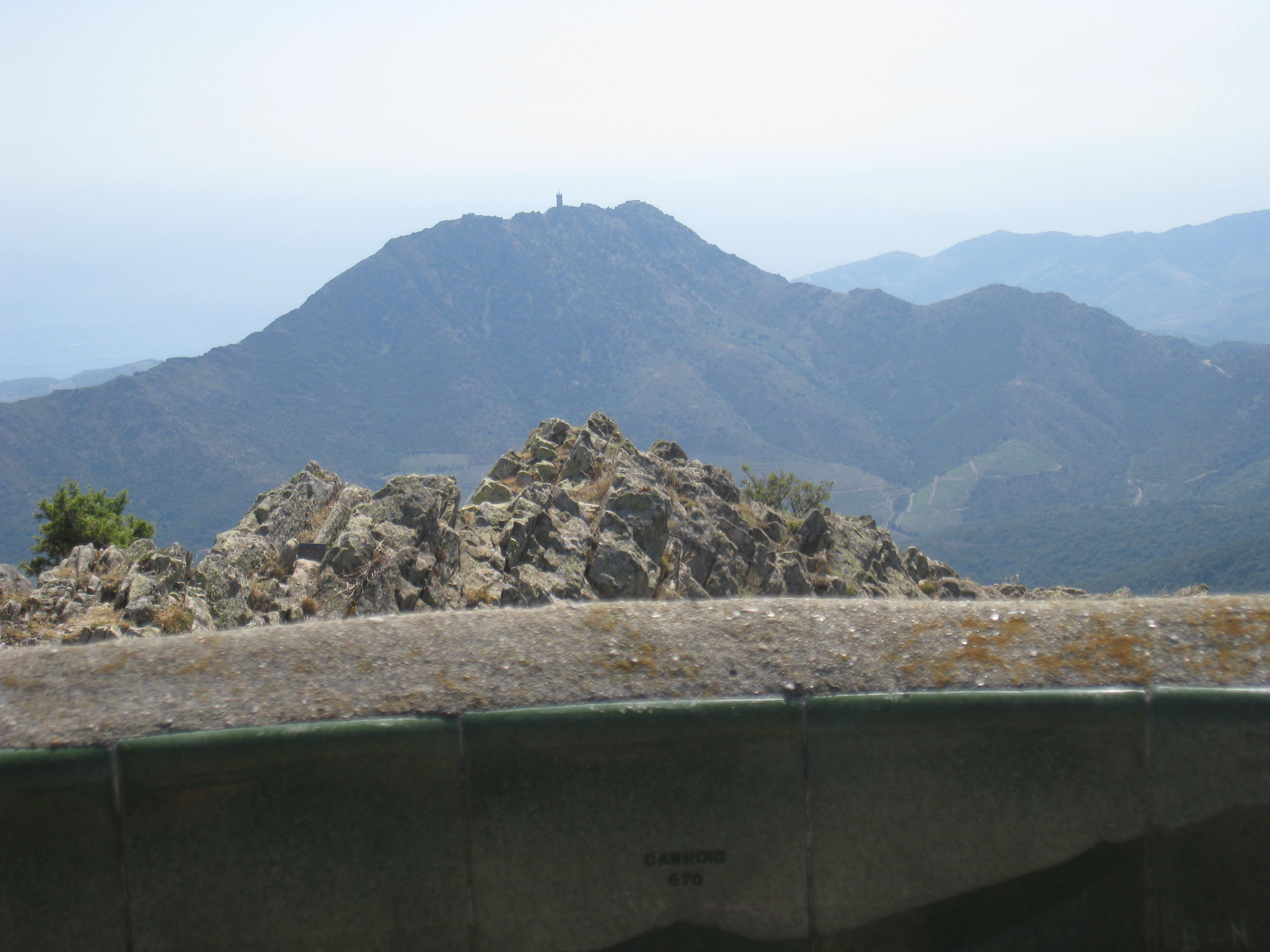 Walk from here, following the footpath, and signs to the Tour Madeloc. The path climbs steeply up the hillside (follow the yellow marks) up to the Batterie de Taillefer 493m alt. 505635E 4705381N.

From here there is a rough road where you actually descend a little and can enjoy the views over Collioure and Port-Vendres and the neatly terraced vineyards to the north east.

After about 700 meters the path rises more steeply again and starts to zig-zag across the hillside as you climb towards the tower. There are also some amazing views to the west as you reach the turn on the north ridge of the hill, where  you can see Canigou’s peak over the Albères chain. After several zigzags you finally reach the top ridge of the hill and can see the tower, with its incongruous TV antennae belying its age. The tower is at 506134E 4704248N, 652m alt.

The views on a clear day are stunning; to the west you can see the Tour de la Massane, to the east Banyuls-Sur-Mer and to the south, Spain!

Once at the tower you realise that there is actually a road from Banyuls and those wishing to enjoy the views without spending the effort (or time) to hike all the way can drive (if brave enough to negotiate
the narrow tracks and steep drops) almost to the top.

From the centre of town, follow the D86 inland on the north side of the river under the railway bridge, turn right towards the cave cooperative, past the chapel of Notre Dame de la Salette and towards the Col de Llagastera. Then continue to the Col des Gascons. From here there is a good path up to the tower. The walk is about 1-1/2 km, still a good climb but with no rocky precipices to scale!

Remember to take lots of water especially in summer.

Coming down is easier but take care on the rocky patches. Allow 2½-3 hours for the whole walk.