LATEST
In January 2022,  Collioure  launched ‘réhabilitation’ work on the tour that is expected to last four to five years.
FIND OUT MORE HERE

Almost certainly it is the most frequently drawn, painted and represented. From the Fauvists through to the artists of today, be they professional or simply hobbyists – the bell tower with its pointy little pepperpot hat is just a must-do for anyone with a pencil or paintbrush.

Collioure is sited in a uniquely beautiful spot where coastal flats near Perpignan give way to rugged cliffs and secluded beaches. This is the Côte Vermeille, which is the French coast north of the Costa Brava. The deep blues of sea and sky and the almost crazily luminous sunlight attracted artists, most notably Matisse and Derain. They came to what was then a small fishing village in the early 20th century, and painted in such wild colours that they became known as the Fauvists.

Nowadays the town hosts more than 50 artists and their galleries and easels, and is often referred to as the ‘ville des artistes’. The church belltower is the symbol of the town, loved by its residents and visitors alike, and it features several thousand times, in every street and square, on easels and in galleries, on postcards, magazine covers, teatowels, menus, adverts, paper serviettes and more. 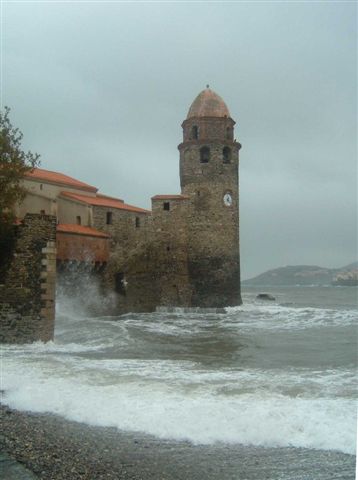 The bell tower or ‘clocher’ has its feet in the sea, or, more accurately, it stands on a small outcrop of rock next to a sunny bathing beach. When the weather is inclement, as it often is, it’s battered endlessly by huge waves flung against it. Unsurprisingly, the state of the fabric is now beginning to cause alarm and murmurings are heard about restoration funding. How did this round-towered church find its place by the sea?

The Bay of Collioure was strategically important, it has been suggested, as far back as Roman times. The earliest written reference from a 7th century source referred to it as Castrum Caucoliberi which over the centuries has become Cocoliberis, then Collioure, or Cotlliure in Catalan. In the early thirteenth century, protecting commerce was thought important enough to justify the building of a lighthouse, or more accurately, a beacon. It functioned with smoke by day and flames by night, but apparently also had a defensive purpose, as the lower part of the tower has narrow arrow-slits in a stout wall.

It’s thought that the structure was partially destroyed when the kingdom of Majorca fell, and towards the end of the fourteenth century a higher tower was constructed on its base. It was about two-thirds as high as the present-day tower.

Collioure was in Spain until it was annexed by the French in 1642 during a fierce struggle between the Spain of the Habsburgs and the France of the Bourbons. An engraving, possibly contemporary, shows the French ships blocking the port. 10,000 French troops occupied the surrounding hills. And we can see the beacon tower standing alone before the addition of the church.

In 1658 the border between France and Spain was redrawn further north with the Treaty of the Pyrenees which recognised that the Pyrenees constituted a more natural and practical boundary between the two countries. The Spanish-French skirmishes more or less ceased thereafter.

In the late 17th century Collioure was therefore less strategically important for shipping but land defences were massively improved. In 1667 our tower became a prison, but in 1693 another change of function ensued. Vauban, Louis XIV’s chief military engineer, created many fortresses and strongholds in the area and Collioure was no exception. Under Louis’s instructions, much of the original mediaeval town surrounding the castle was demolished so that fortifications could be strengthened, and this demolition left the villagers without their church.

A new church had to be found – for a few years an existing monastic building was used on the other side of the bay but this wasn’t very conveniently sited, so a new church was built, attached to the belltower, with the first stones laid on July 18th,1684. It was finally completed in 1693. At this point another level was added.

The interior of the church is typically Catalan Baroque of the period with an ornate wooden gilded reredos and several similarly dressed side chapels.

The masonry of the tower can be best described in three sections. The lowest third is the 13th century base, which is about 7 metres high, faced with brown schiste and pierced by arrow-slits with white marble reveals. The next level is white rounded stones set in cement. Finally the top story is topped with red brick.

It wasn’t till 1810 that the pink dome was added. It has been suggested that this was Italianate in inspiration but on the other hand, there are several similar pepperpot towers on other buildings in Collioure and indeed elsewhere. This addition gives the whole tower a ridiculously phallic appearance, which is difficult to ignore, and much has been written on this topic.