Impossible to miss when driving the D14 from Prades to Mosset, the splendid Grand Thermal Hotel dominates the deep gorge cut by swift running water of the Castellane River. On the left, a tall rocky outcrop is topped by a ruined castle and, hidden from immediate view, a small chapel. On the right, the gothic, grey granite Chateau de Riell rises out of luxuriant grounds, exciting curiosity and firing the imagination.

The waters found in the gorge are no ordinary waters. Back in the 13th century, the Catalan troubadour, Dauré, sang of their power to change a toad into a dove. More recently, in 1754, the Marquis of Llupia, lord at the time of the now ruined Chateau de Paracolls, was hunting in the area when his favourite hound, who suffered from incurable eczema, went missing. The dog was eventually found rolling in the mud of a hot spring. His skin was miraculously healed.

Locals with similar afflictions followed the hound’s example. They constructed a small basin of a couple of square meters in which to wallow in the curative mud. The reputation of “Les Thermes Llupia” spread, changing owners until, by the end of the 19th century, they were flourishing, grand and extremely popular. 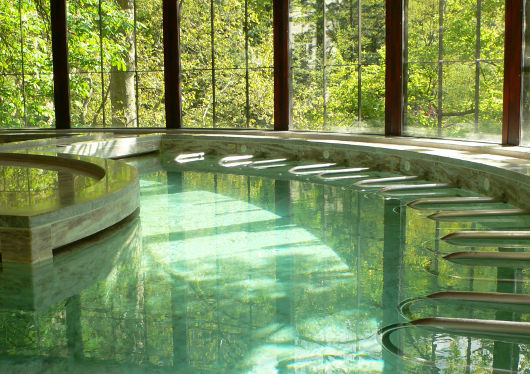 In 1946, Adrien Barthelemy of Toulouse, delighting in the idea of being cured of skin disorders by healing waters and impressed by the beauty of its position, fell in love with and took over both the Grand Hotel and the Chateau de Riell.

It became an important member of the Barthemely family’s “Chaine Thermal du Soleil”, twenty Thermal Hotels including, in the P-O, those of La Preste, Amelie le Bains and Le Boulou. Adrien Bartholemy, worked closely with the Health Service, ensured that patients could and still can receive a prescription for a cure of three weeks at the Grand Hotel. (One can, of course, take lesser treatments starting with a half day “Discovery” package for fifty or so euros.)

He dammed the Castellane River, creating a lake surrounded by beautiful gardens. A footpath winds its way up behind the chapel by the lake to the ruined castle of Paracolls passing an impressive dolmen, twisting and turning through scrub oak trees and huge granite boulders. It is possible to return by a meandering path that brings you back to the lake and the possibility of a welcome drink on the terrace or in the bar of the Grand Hotel. 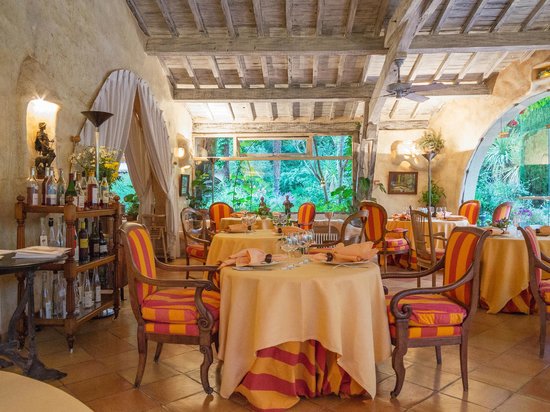 Residents and non-residents alike can enjoy the walk and the many varied concerts organised in the hotel, as well as the excellent restaurants, health and beauty treatments, and, if eating, use the swimming pools. Children are also well catered for with special menus, programme of artistic courses, sporting activities..

Some years the autumn festival is dedicated to Chocolate in memory of the dog loving Marquis de Llupia’s favourite chef who hailed from Catalonia Sud, and, as did many of his countrymen, used a lot of chocolate in his cooking. In fact, the Grand Hotel’s Café Pablo Casals was once a chocolate factory.
Château de Riell – remarkably unusual Mademoiselle Biche Bartelemy, the present director of both the Grand Thermal Hotel and the Chateau de Riell, admits that the Chateau de Riell was a remarkably unusual house to furnish. A warm and engaging woman, she is full of stories of the history and legends surrounding the Château and Grand Hotel.

A passionate collector, the mastermind and designer behind the highly original décor. She has created rooms of a delightfully understated luxury, each one intriguingly different, a delightfully understated luxury. The African bar is totally “Out of Africa”, the “Dacha”, straight out of a Russian novel where breakfast can be taken, the furnishings and paintings, the views of Canigou, the ruined castle and tall trees framed by the castle windows, the fabrics, the rugs and carpets, all reflect her love of her Chateau, with rooms to dream in, to relax and leave the humdrum far behind.

Actually there is nothing remotely humdrum about Chateau de Riell, neither the rooms, nor the restaurant serving excellent local produce in a dining room whose windows are level with the treetops, nor “Les Oubliettes”, the club rooms in the original cellars of the Chateau complete with secret passages for escape in time of trouble.

Look out for further fascinating information on the Chateau de Riell when we  revisit and explore the Pablo Casals connection, the tale of the clarion, the bear eating from a strawberry tree, the many sporting activities, the surrounding walks and villages….

CLICK HERE FOR PART TWO ON THIS FASCINATING CHATEAU….