By the time August came, I had grown accustomed to seeing bean bags scattered about on the sand. At first, I thought it absurd to see people drag home-furnishings onto the beach, but I had come to appreciate the needs of a body when they set up camp by the sea for a day. My own equipment needs had radically changed over the summer: at first, I needed nothing more than a towel, a bikini and a pair of goggles but as the weeks went on I had acquired a bike-friendly light parasol, an “as seen on T.V.” portable sun-lounger that I could carry with me as I pedalled my way to paradise. I filled up my bag with necessities: wallet, sunhat and sunglasses: sunscreen for my body parts, a separate one for my face and hair: lip balm, an array of hair-accessories, an award-winning head-rest which I could no longer live without, water, snacks and a lunch box, a phone, charger, earphones and my kindle. If I forgot one item, there was a lot of kicking up the sand. 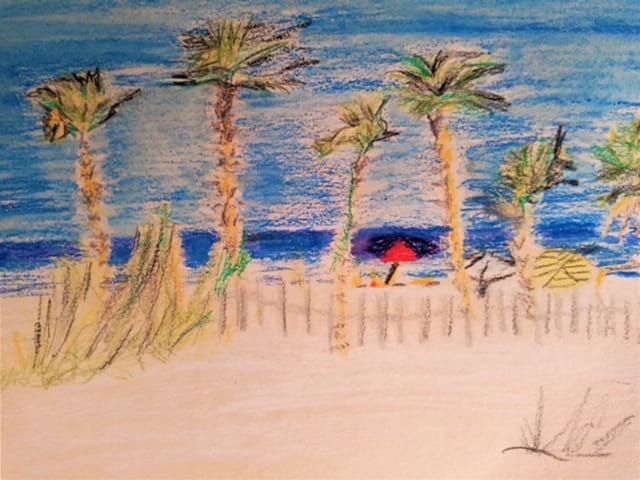 Going ten minutes down the road became not unlike packing to go on holidays, every single day. To save me another journey, I often stopped at the market on the way home, and that added more baggage to the handlebars. Bemused faces glanced at me, but I am not one to bother about that: I thought of far- off destinations like Vietnam, where entire families dangle from bicycles and rest on the handlebars together with live poultry that wiggle about in cages stacked high whilst the drivers furrow a path through the mayhem of beep, beep and haphazard smoke-filled roads crowded with traffic and people. In St. Cyprien, whenever I saw cyclists carry surfboards and trailers hitched onto the back of bicycles, I felt less of a Don Quixote, and I ploughed on, veering my over-loaded bike down the road whistling a happy tune. 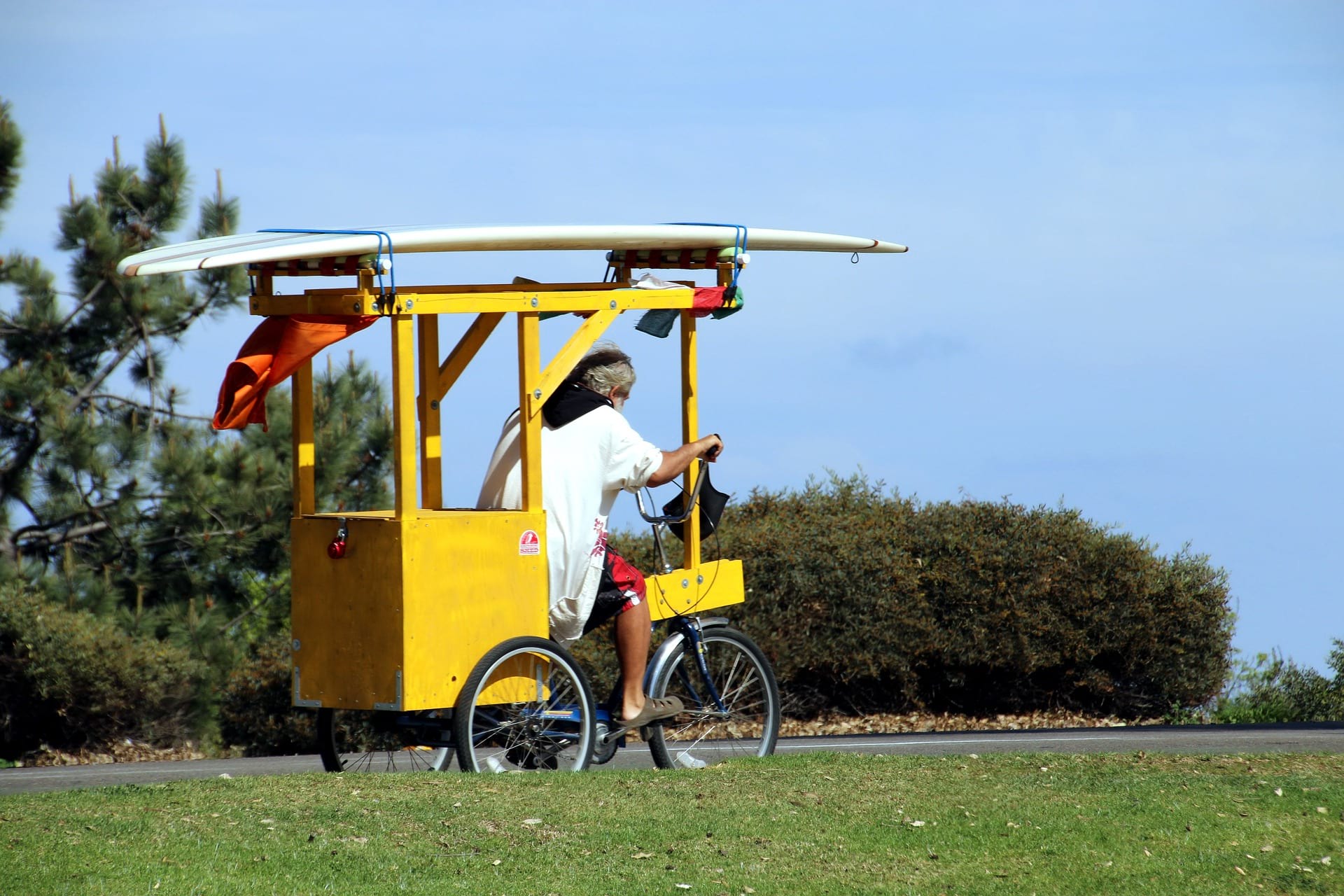 One evening, I saw a man carefully position a bistro-style wooden-chair in the sand. He arranged a small side-table with a lace-cloth covering and placed a white table-lamp on top of it. He outstretched a blanket on the sand. He set the table for a picnic. A woman wearing a bonnet, her back stooped down low towards the sand, her frail hands clutching the hands of her two escorts who led her gently across the sandy route to take her seat by the sea. Pink-rose clouds made dramatic collages in the sky; birds stood like ornaments in the sand. The lady sat elegantly in her chair. I imagined that she was breathing in the contentment we all feel when we are by the water’s side at the beginning of a summer’s night. 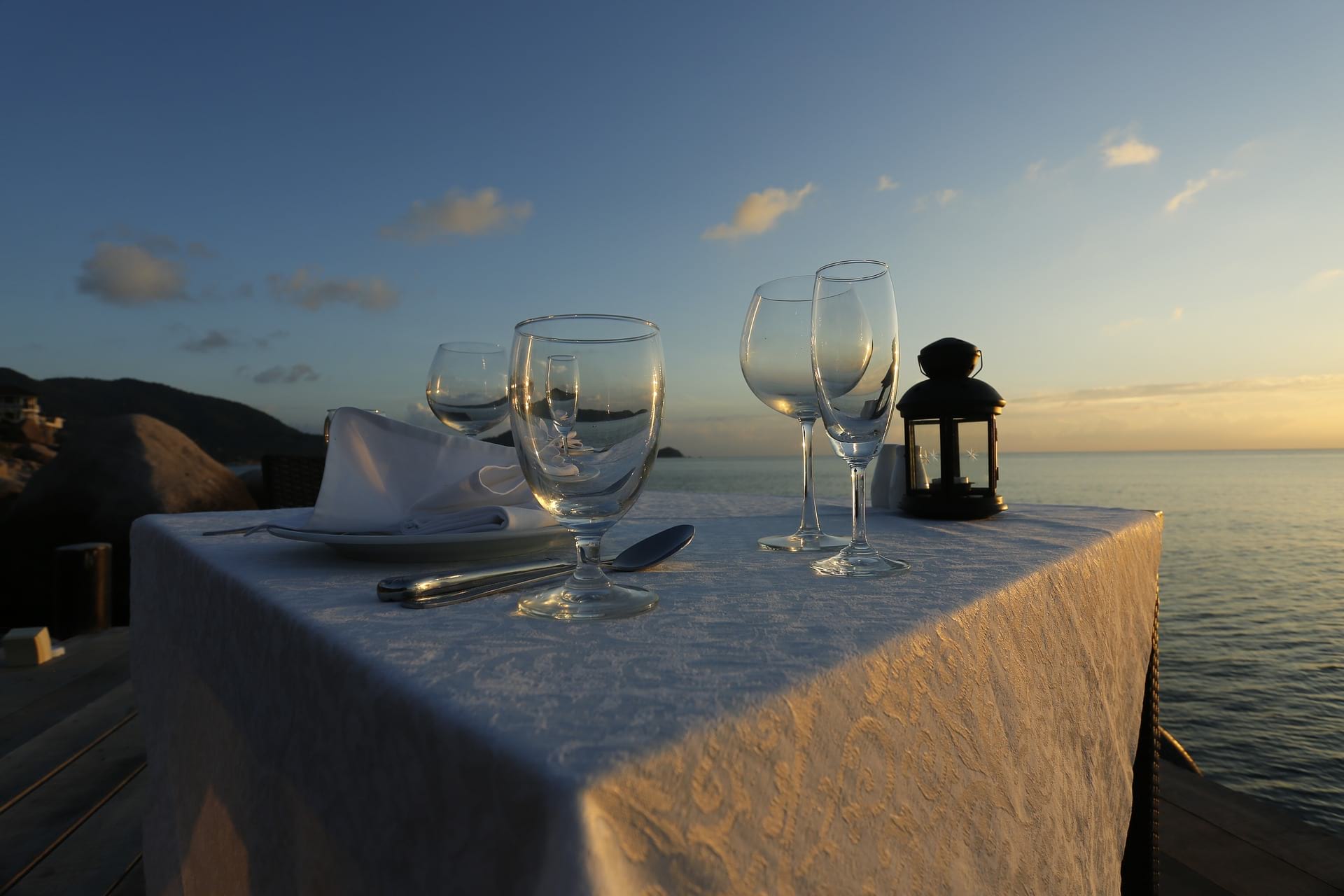 It was on one of those hot afternoons in mid- August that I was pottering about. I wanted to fix a cupboard but needed a screwdriver and so I decided to rap on my neighbours’ door and ask if I could borrow one. Another neighbour of mine, who spends his retirement engaged in routine surveillance of movements around the marina, ordered me to stop, but it was too late. My neighbour’s wife appeared struggling with the belt of her kimono, her brows in full Beethoven concerto mood. Was she growling at me? No, I assured myself, the sound came from her dog. I had that revelatory moment when one thinks a dog and owner bear a remarkable resemblance to one another.

The little mite was barking incessantly, showing no signs of recognition, leaping up and down as if I was about to rob their house. A few witnesses arrived. They must have been lurking behind the trees because there was no-one around when I set out to do my little task. They murmured amongst themselves, discussing their bewildered neighbour who took it upon herself in the middle of the sun-drenched day to set off on a quest for a screwdriver. I thought about neighbouring Spain where they nap like dogs for the whole afternoon. I had no idea French people also enjoyed a snooze in the afternoon.  “Sieste” I repeated slowly as the light-bulb lit up my face. I left them with my newly-acquired screwdriver in hand, pondering if I really was doing DIY in the dead heat of the daylight hours and whether or not I had recently been drinking. 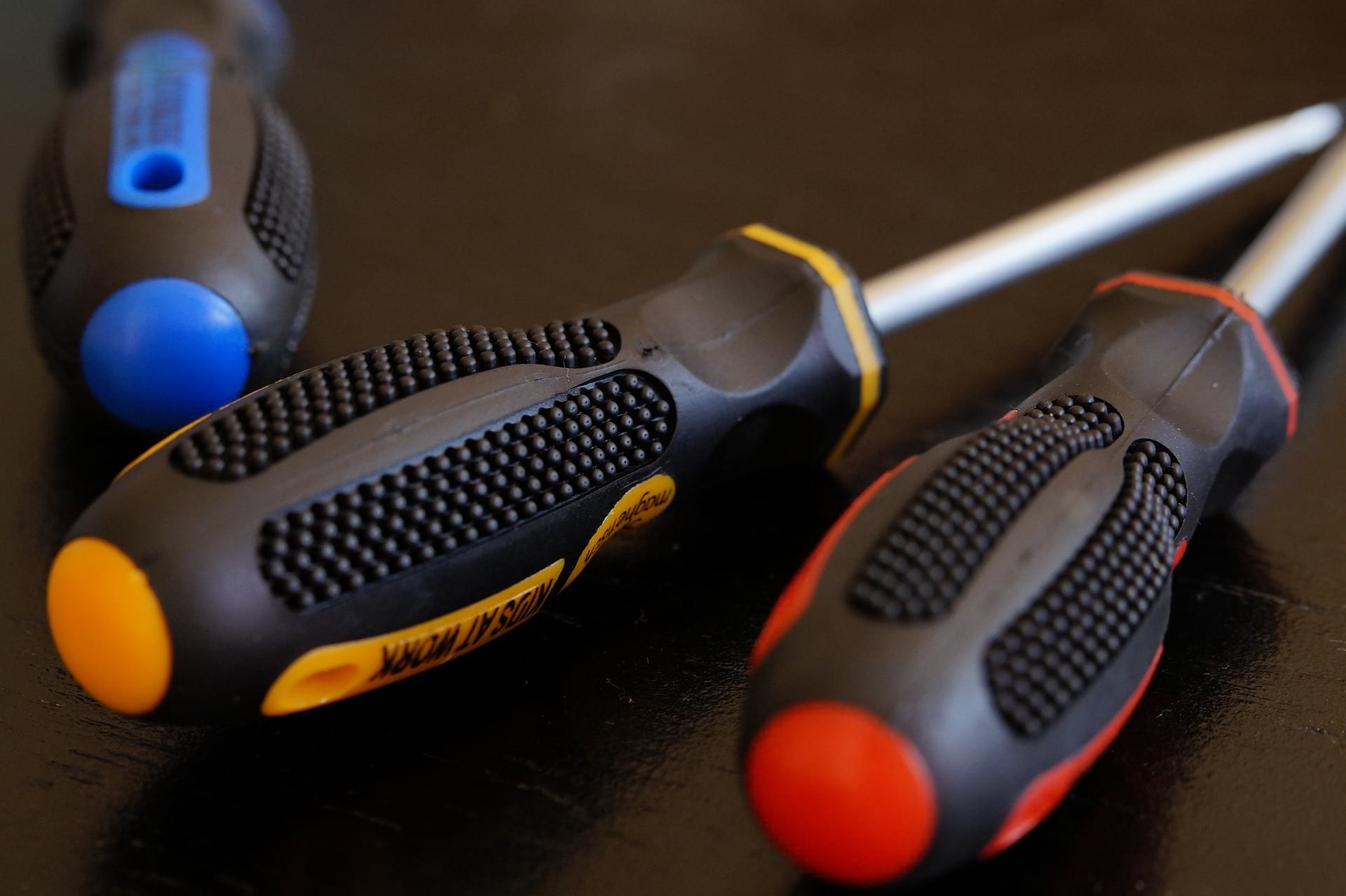 Just as I discover a new way of being, it has come to an end. My calendar was full of blotches and eraser marks as it had become a sun-dial device that followed the apparent motion of the sun. When the sun was at its zenith, I have pencil-shaded in those hours for retreating indoors to sieste, my wonderful new sport, which I have a natural flair for, I might add. Mornings began earlier and earlier until I no longer had lengthy discussions with the baker or winemaker that “trop de monde” is here, there and everywhere, blocking our route.

Today, thunder complains as though the sky has a hungry belly and grumbles until it rains. I wander around, letting the raindrops fall on my head. Occasionally there comes some gushing water spray as a car passes by.

Car parks are empty. The bulk of summer invaders have already packed up and gone.

A car passes me and I can tell there is some discussion underway about their route. Clutching the steering wheel, the driver is sober-faced, already homeward bound, back to the work of life. The passenger takes a last glance outside, perhaps wanting to lodge a little souvenir in her mind. In the back seat, children make blowfish faces onto the steamed-up windows. I resist the urge that I have to wave goodbye. I hope they had a lovely time.

Gold and brown leaves scatter along with the breeze. My eyes glance at the sight of the leaves already collecting into piles and making tunnels on the byways. Are the gardeners in our residence over-zealous? Did they shear all the leaves off the trees on the avenue outside? I want to shake myself out of this autumn dream. I want to go back to just the other day when I was complaining about the oppressive heat. I want to moan about having no alternative but to go to the beach because it’s too damn hot to do anything else. 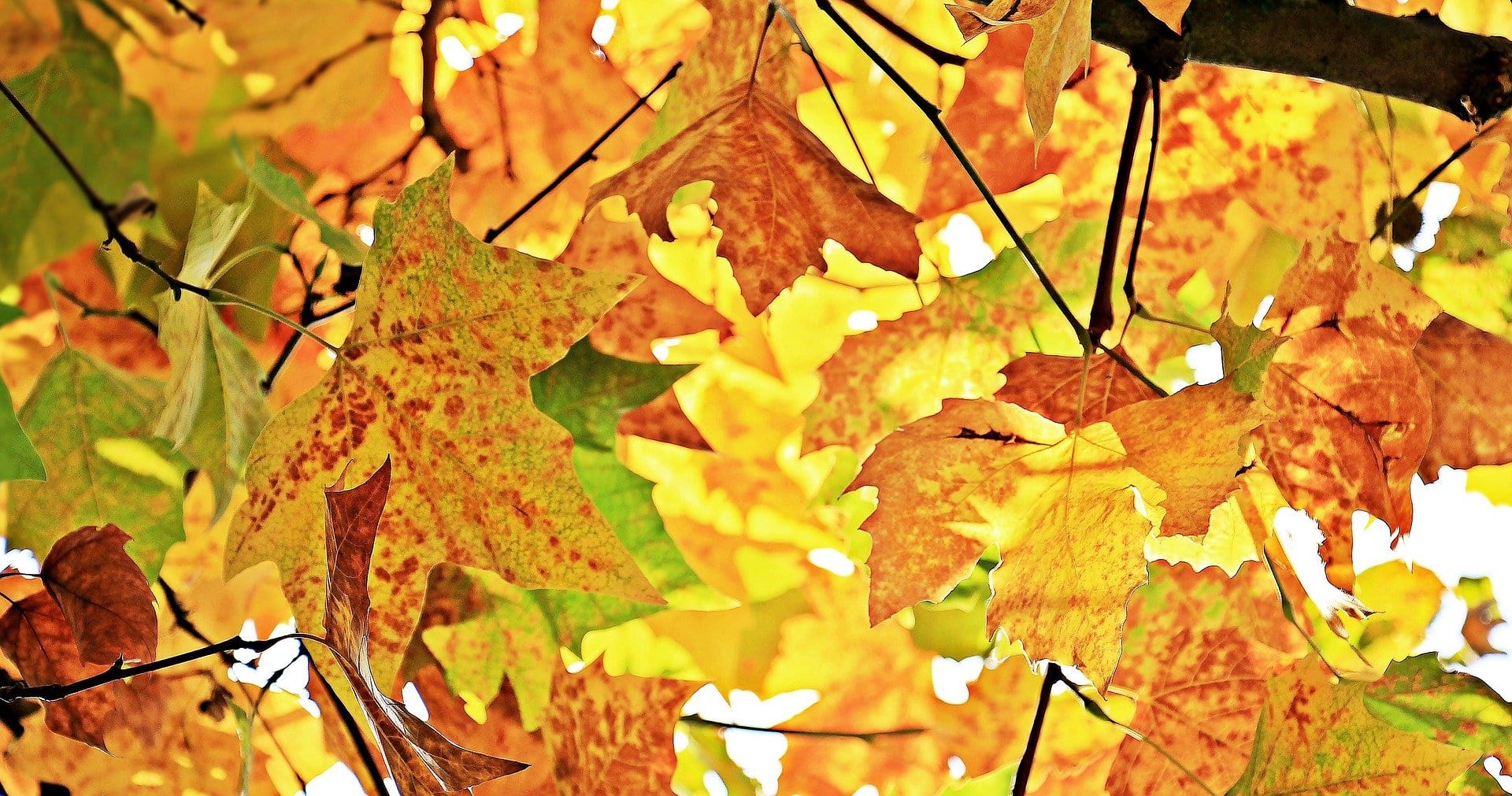 I am curious if I will ever be able to respond as the locals do when they say there is no need to go anywhere. Life is like a holiday here all the time, I’m assured. I’ve heard some describe September here as “magnifique” which is enough to make me feel right at home. I might even find myself declaring September to be the best time of year, which I have been promised over and over.

All there is left to do now is enjoy it.