As soon as my neighbours declared the war is over and began kissing me on both cheeks again, tourists swarmed in around us. Exiting, the apartment has become an excursion into the throng of the wildebeest migration heading across the Serengeti.

Hats and sunglasses cycle around in Neanderthal loincloths and bikini bottoms. Parasols sprout out of bodies like samurai swords. Mask wearers parade around with pink unicorns on their heads and carry giant lobster water floaters that trail behind along the ground: it could be carnival time in Rio de Janeiro.

Canoes and surfboards are hanging on bronzed shoulders already sagging with bag-straps and children. Broad-brimmed sombreros worn by bearded men wearing dark glasses look like they forgot to bring their kids. And the children are racing ahead, bike-pedalling furiously, weaving their path through the mob and already thinking about sandcastles.

Scooters, motorbikes, car rooftops, bed-knobs and broomsticks, trailers on the back of bicycles: we’re all going to the seaside.

Paddle-boarders bring a civilised air to the ocean as they stand on their boards and politely sweep the sea with their oars: just behind them, waves are awash with yachts, speed-boats and jet-skis tearing this way and that. 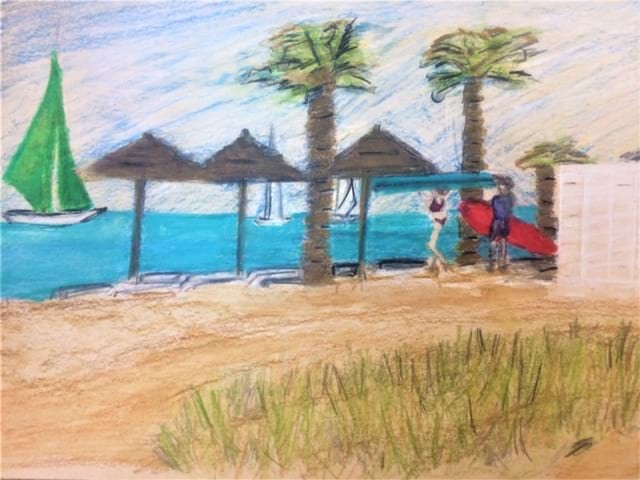 On the sand, people scatter about, stretch out under the sun, roll under parasols and are comatose until they leap up suddenly and patrol the waters’ edge in search of children who are off on fish-hunting expeditions.

For the anthropologically curious, one wonders if the couples standing in the water up to their waistline staring at each other, have recently been rescued, perhaps from a ship-wreck of titanic proportions. Swim-capped heads open-mouths and veer a new course when they spy obstructing lovers.

I might ask to join the fun, but I suspect there is hypnosis involved. Besides, the sight of silverfish slinking past monopolizes my attention and off I go, ducking underwater where I find that the loving couples’ legs are also busy down below, wrapped around each other. Oh to be young, in love and an octopus!

At home, youngsters befriend new neighbours’ children as soon as they arrive. There comes a clatter of dishes, laughter and banter with evening meals. People wander past, dressed to go out. Laughter comes in waves as folks lounge around outside after dinner. Pink clouds bring stars, one after another they introduce the night and settle us into the evening.

Last week I went on a day-trip to the city of Narbonne to meet up with friends. On route, the train was modern and efficient, so when I saw the home-bound train, I assumed that I was at the wrong quay. The forlorn train looked derailed away off to the side whilst swish trains bound for Paris and Toulouse took centre stage under covering in the station.

Confused, I dashed up to uniformed men loitering on the platform and, after some reassuring, I hopped onto the regional train. The poor train looked as though it had been donated to support local street artists, who were somewhat creativity challenged. In case it might slip their minds they had done it, the entire train boasted different versions of their initials.

A surprising confident rush of the wheels, a reassuring rocking motion and we were away! The thrill of the Ferris wheel came when the tracks almost plunged directly into the water. On one side, snowballed birds heads with golf-ball-sized bodies and long spaghetti strand legs plucked at the reeds in the marsh that led to the sea.

Opposite, the window made a composition of a grand lake with signs of village life scattered across a mountain range and a row of derelict houses on an island was like an old painting in a dusty antique shop. It was exhilarating to swim between two seascapes.

Philosophers extol the importance of revelling in experiencing the journey and not to focus on the destination, but, this train ride is one trip that may outstrip any memory of the goal. And all for a price of one euro return.

In the city of Narbonne, we strolled around the formidable Cathedral of notable size with pretty glass-stained windows and shady, eerie arches. I would have been a more devout person if I grew up in a hot climate with no air-conditioning: the air was heavenly cold in there and cool marble tombs with statues of bishops lying down looked inviting.

My friend’s casual conversation led to interrogation about Irish Churches, their date of construction, etc., followed by a few trick questions about Irish history and politics. The sunshine has shrunk my skull. My brain in the South of France is a simple device, used infrequently and only to store vital information wondering – am I hungry? Thirsty? Tired?

My friends gave up waiting for my struggle to figure out what century were are in now, never mind a couple of hundred years ago; their minds wandered off to ponder their own vital needs such as where we were going to eat.

We sat outside for a tapas lunch. Conversations developed to enquires about what I had been doing all summer. I, who had recently been so creative about Irish history and folklore, was stumped. Cocktails at Temple Beach club with inviting sun-beds to relax on – does that qualify as doing something? Ashamed, I had to admit that I have lately become a beach bum.

Summer is the season to let go, breathe in the good and out with the bad, I was informed by my friendly spirits of the art de vivre.

It sounded like a summertime song being told to live easy, let it linger.

Coming back to St. Cyprien, I saw bursts of flamingo and cerise flamed flowers that were bushes in hedges only a few weeks ago. We too need to wilt in the sun, take time to hose down so that we can bounce back, refreshed and rejuvenated. Things take the time that they do.

And how nice it is have nothing much else to do but chase after sea-breezes.