Did you hear about the incident between the Franciscan friar Bernard Delicieux and Prince Ferran, third son of Jaume II King of Majorca?

The events took place 700 years ago at the summer residence of the Majorcan royal family at Saint-Jean-Pla-de-Corts.

Brother Bernard was born in Montpellier around 1265. He was a man of great intelligence and strong character.

He abhorred the inquisitorial abuse and its brutality in the Languedoc relating not only to the Cathars but also to many innocent people.

He tried for years to bring the situation to an end, led protests and appealed to many people in authority right up to pope and king; all to no avail.

As an act of desperation for the suffering of the Languedoc under  the Inquisition, he concocted a plan to encourage Prince Ferran to back a revolt in Languedoc as an alternate ruler.

Apart from being high treason, this was probably not very realistic!

Early in 1304 Bernard travelled to Perpignan with a colleague, carrying a letter with the seal of the Consuls of Carcassonne addressed to Prince Ferran, asking him to place Carcassonne under his protection.

They were informed that the royal family were at their summer residence at Saint- Jean-Pla-de-Corts – a palace built on a rise by the River Tech.

The two men lodged at a local church and the prince went to meet them there.

King Jaume found out about the plot.

Powerful Aragon and Majorca had negotiated a peace deal some years previously and it was also essential to keep good relations with the King of France (Philip the Fair). One can imagine his horror on discovering his son’s plans!

King Jaume called Ferran to his royal apartment and promptly attacked him.

He started beating him and pulled out chunks of his hair. A footman present was forced to pull the king away from his son.

The king had made it very clear about his feelings regarding his son’s intended actions.

A king’s emissary was sent to Bernard’s lodging with the order that he leave Saint-Jean-Pla-de-Corts immediately and be out of the kingdom altogether by the end of the next day.

He obeyed the order passing the night at Le Boulou and then went on to Carcassonne. 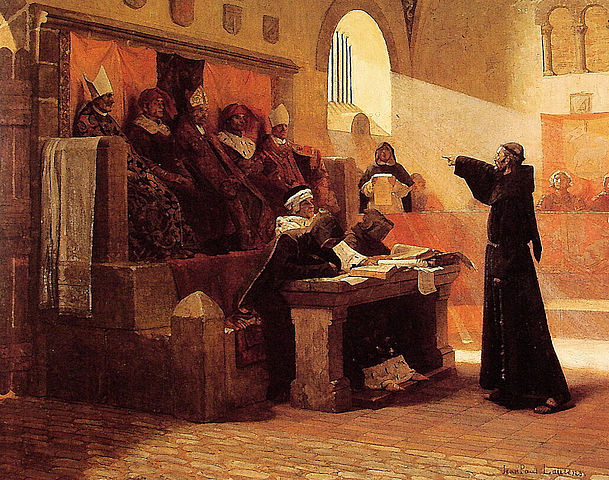 Surprisingly Bernard was forgiven by King Philip for the plot of secession.

However, despite this, years later at a set up  trial, treason against the french king was one of the accusations brought against him, along with ‘disobeying the franciscan order as a spiritual’, ‘murdering pope Benedict XI’ and ‘obstructing the inquisition’.

He was convicted, imprisoned in Carcassonne and died as result of torture soon after his incarceration.

There is a painting by Jean-Paul Laurens (1838-1921) called “The Agitator of Languedoc” which depicts the trial of Bernard Delicieux before the inquisition. The painting is held by the Musee des Augustins in Toulouse.