by Tim and Chris Parker

An excellent circular walk of approximately 4 1/2 hours with 550m of ascent. The walk offers wonderful views of the Corbières ridges and valleys and beyond. Walking boots essential on the rocky, sandy paths. Walking poles helpful. Route offers shade in some parts. Waymarking is red and white. One part of crest is very exposed and needs great care. Not recommended in high winds.

Once out of the town, after several bends on the climb, look out for an emerging piste on the right – tree marked with red and white GR symbol and with a yellow route board on opposite side of the road. (Piste is point of return on GR 36) 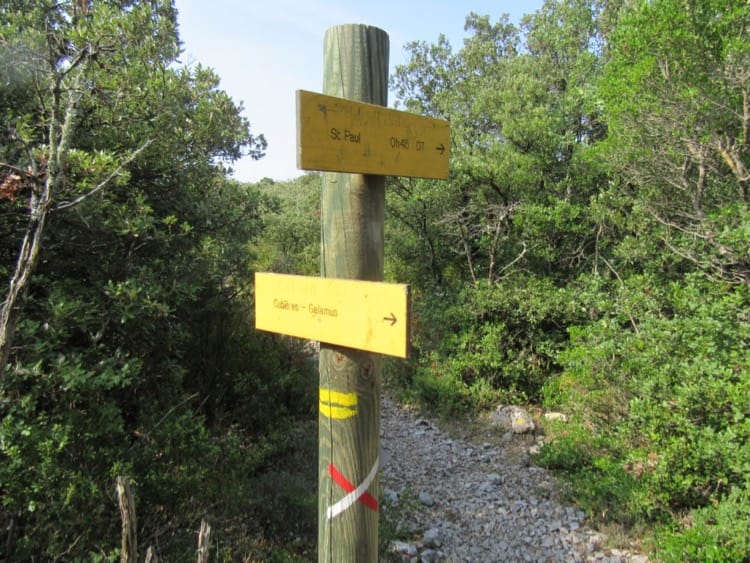 Turn round and park on space at side of road just below the piste. If you reach a second piste to right of a sharp left- hand bend you have gone too far and are near the start of the ascent. Any trouble parking, proceed to car park at the Gorges de Galamus and walk back down the road – but it will be quite a long way up the road at end of walk.

Walk up the D7 for 10 mins to find start of path on right, just round the left- hand bend. GR de Pays, Tour de Fenouillèdes. 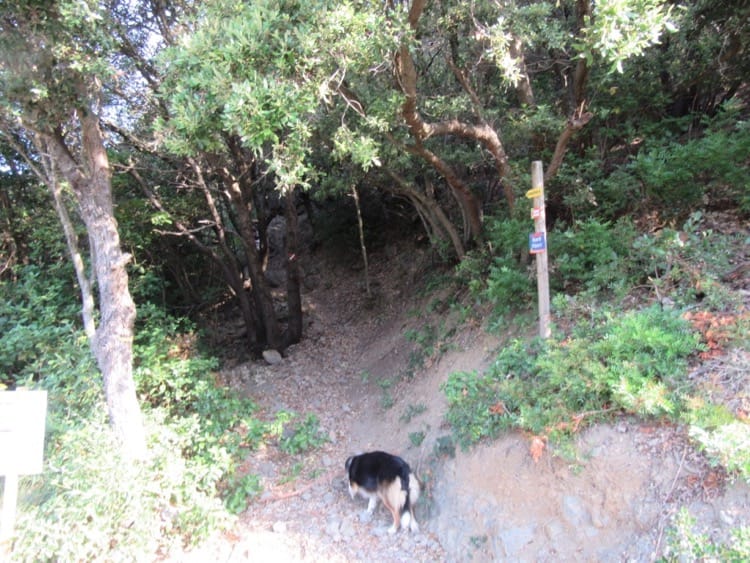 Ignore path on left into woodland and continue upwards, swinging north, to soon contour round a parallel gorge. The cliffs of Gorges de Galamus can be seen to left and main car park can be seen at one part. Scenery is typically rugged, like much of the Corbières. 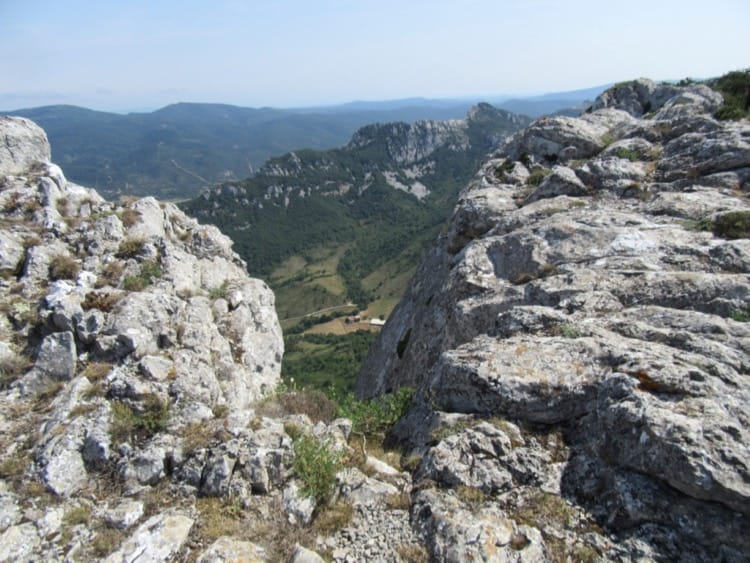 At the top of the gorge and 1h 15 mins into walk turn right at a T junction of paths.

Enter shady woodland and continue gradual ascent, with more views unfolding across the Agly valley and over to the sea. A few steeper sections up the pace of height gained to emerge at the crest (514metres). Approx 1h 50 mins to this point.

Follow the path along the crest, drop a little then climb again to emerge finally at a dramatic rocky area with vertical cliffs on left. Take great care crossing this section. Look out for eagles and look down into the valley if you dare, without going near the edge!

Path starts downwards at end of the exposed area and goes behind the mountain. Great care is needed. It is steep and first passes over boulders and rock before dropping over smaller stones and soil paths to emerge at the end of the range of precipices! Look right to see Chateau de Peyrepertuse on the next range of mountains. 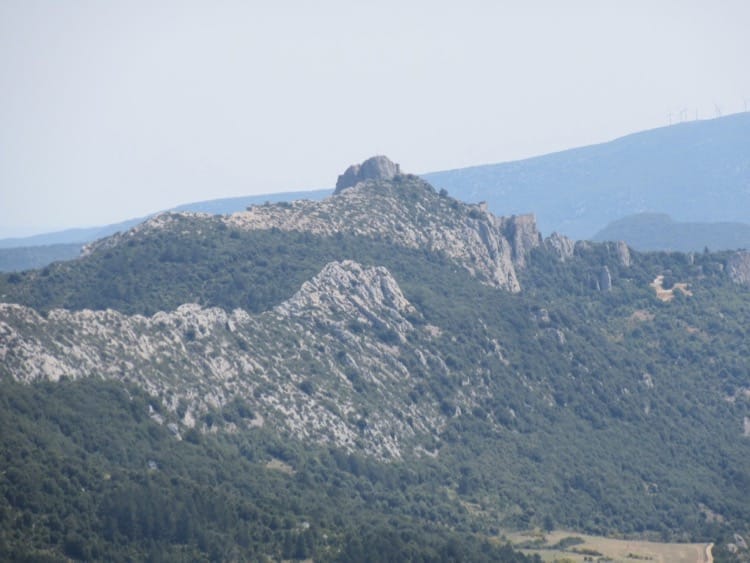 Continue downwards to emerge on a green valley. Proceed a few hundred metres along the level path. Note a path ahead leading left to right across the grass. At a suitable place cross the grass to meet this path rather than continuing to the meeting point of the 2 paths.

Turn right on this path – the GR 36 – to enter woodland. Follow the GR all the way back to the D7 and your parking place – about 1 hr.

After woodland the path becomes more rocky, following the left hand side of a valley, working its way ever downwards to eventually emerge on a piste, 300 metres before the road. You will be serenaded by the sound of cicadas in summer!

Refreshments are available in St Paul de Fenouillèdes and at the Gorges de Galamus (in season). If you have not visited the Gorges do take the opportunity to do so, or return on another day as they are a wonderful sight.

If you do return for a day drive, emerge at the other end of the Gorges take a right turn to enter a fertile valley and travel along past the Chateau de Peyrepeteuse, Cucugnan (if you can bear to drive past without taking a look at the charming village) and Chateau de Queribus, to emerge at Maury on the D117.

Perched high on their unbelievable mountainous rocky outcrops, the Cathar castles, known as the “Five Sons of Carcassonne”, Quéribus, Peyrepertuse, Puilaurens, Termes, and Aguilar, dominate the beautiful rolling vineyards of Maury and Cucugnan. Veritable eagles nests, owned by noblemen sympathetic to the Cathar religion, they became the last resort for the Cathars as the Albigensian Crusade threatened to wipe them off the face of the earth. When the border between France and Spain changed, following the signing of the Treaty of the Pyrenees, they lost their strategic importance. It is possible to visit all in a very full day with an eye wateringly early start, but they warrant considerably longer.

Eight hundred metres high, occupied since Roman times, the castle of Peyrepertuse (pierced rock in Occitan) was first mentioned in 1020 when it was owned by the Catalan Counts of Besalu. In the times of the Cathars, a secret passage ending in a movable ladder afforded vital access and escape. It still exists today, a narrow path behind a rocky overhang but the secret passage is closed off. By 1258 Peyrepertuse was one of the forefront royal fortresses of the border of Aragon. It lost its strategic importance in 1659 but remained in use till the French Revolution. Perched on its dramatic 40 metre high cliff, it appears inaccessible from the ticket office but a ¼ hours narrow shady walk through scented box brings you to the entrance keep of St Jordi. 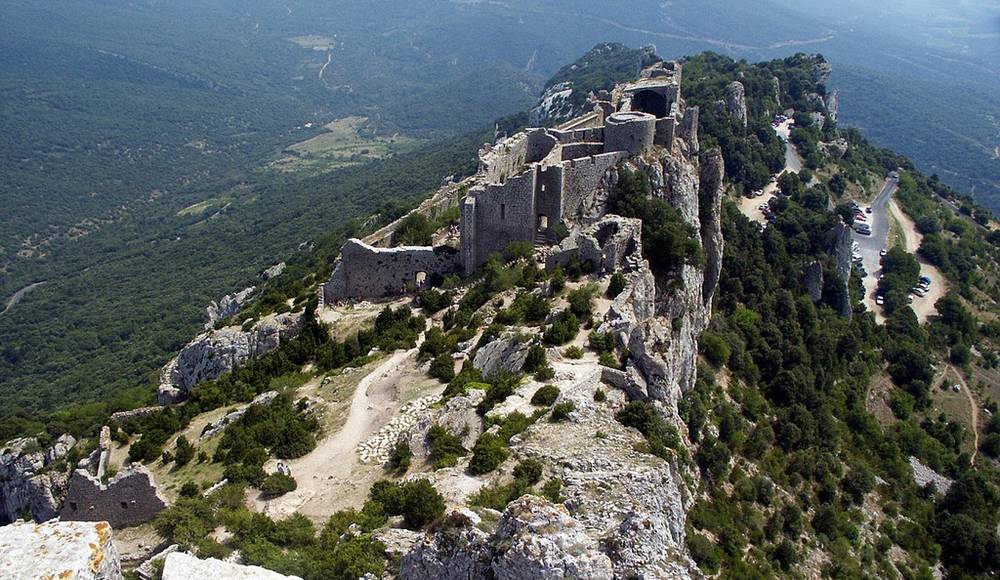 Perched high on Mont Ardu, the strategically situated Château Puilaurens surveys the picturesque village of the same name from its rocky crest, an imposing visual landmark in a remarkable landscape. Cathar refuge in 1245 – 46, one of the main border defences against the Spanish until 1659, the castle is easily accessible by a 20 minute shaded walk from the car-park. Fortified steps zigzagging upwards towards the ramparts were specifically designed for defence. Castle keep, dungeons, narrow, winding corridors and ‘secret’ passages to delight the kids. Legend has it that when mists surround the castle, the White Lady, Blanche de Bourbon, is wandering the walls in her misty veils. 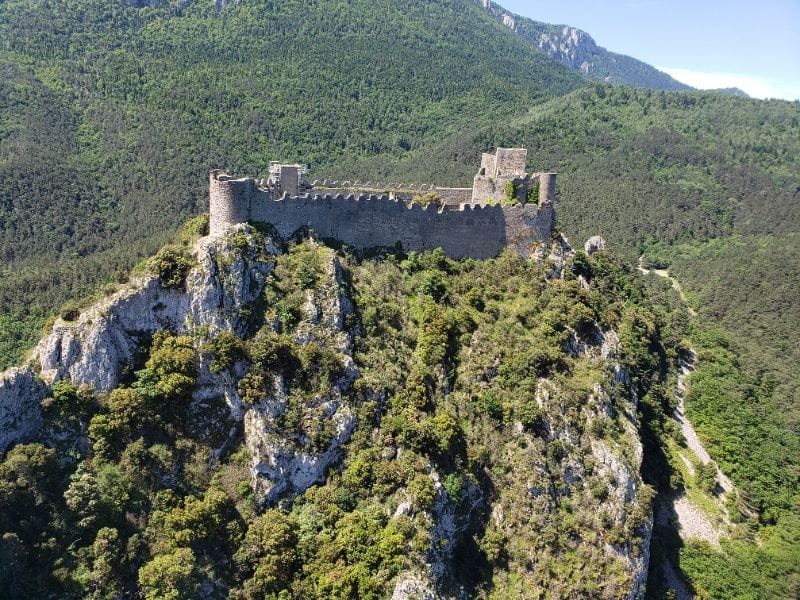 Queribus is believed to be the last stronghold of the Cathar defence, fell in 1255. A monument to the dramatic events that have marked the turbulent history of this border country, it lost its strategic importance in 1659, when the Treaty of the Pyrenees changed the frontier between France and Spain. Easily accessible, it is possible to drive within a few hundred metres, with a short walk to the steep and narrow entrance. The many arrow slits covering the approach, and the three perimeter walls, rising in level suggest that visitors were not always so welcome here! In fact, so clever was the defence system that it took only fifteen or twenty soldiers to man the castle. Gothic hall, dungeons and amazing views! 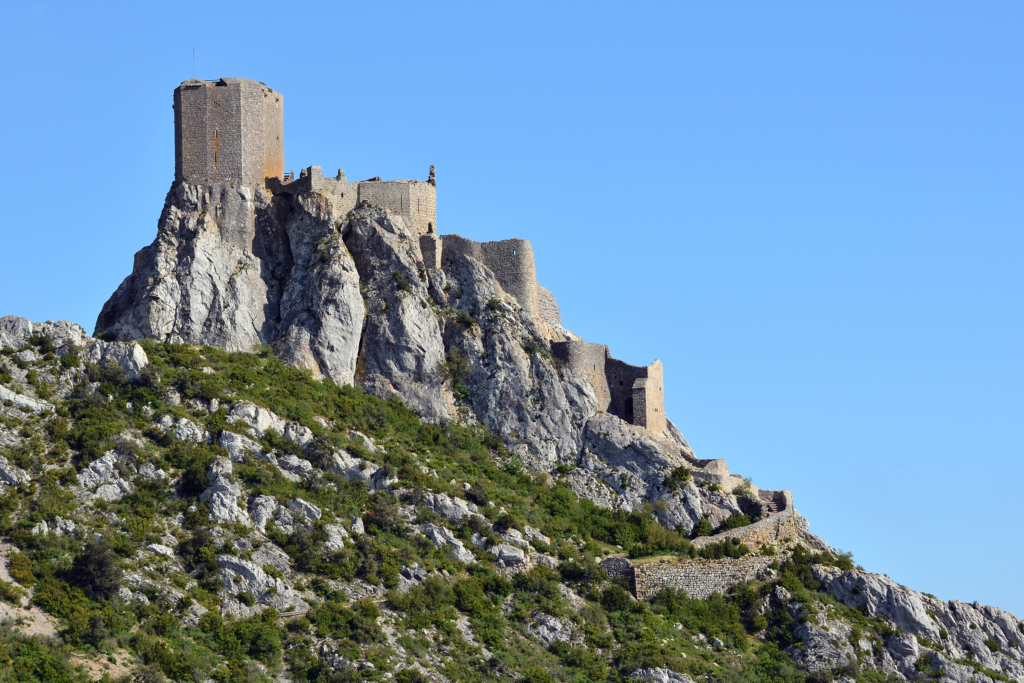 The remaining two sons of Carcassonne are mostly in ruins, but still fascinating to visit. A fifteen minute climb from the free car park, Aguilar (or eagle) was one of the main refuges for ‘faidits’, (Occitan for banished), Cathar knights and lords dispossessed of their own strongholds. More modest in size than its neighbours, you can still see the remains of the defensive walls, with semi-circular towers and the small underground chapel of Saint-Anne below the keep. Access to Termes is via the Information Centre in the pretty little riverside village of the same name. Watch the informative introductory video (English subtitles!) about the Cathars and the Cathar crusades available at the visitor reception before a fairly steep climb takes you to the site itself.

Find out more about our local watchtowers here.

Drop the hikers off at the start of the walk and head off in search of a dégustation or two? (Of course, a non tasting driver is recommended.)

And what better time of year to taste these robust, spicy reds, reflecting the hot, sunny, windswept land from which they spring?

Return to the old Roman town of Saint Paul de Fenouillet to begin your wine circuit and take direction Ansignan on the D19 (D619) towards Lesquerde.

The scenery as you leave Saint Paul, direction Ansignan, is stunning and dramatic, passing through ‘Clue de la fou’, a deep and vertiginous gorge carved for centuries by the waters of the River Agly.

Pass pools of clear water, running under ancient Roman stone bridge and eroded rock formations nicknamed ‘les marmites de géants’ (the giants’cooking pots). And there’s magic in the air as legend tells that this is where fairies came to do their laundry.