All Along the Watchtowers

The enemy approaches. Phone the guard.

Of course, this is the 13th century, long before phones and social media. Communication by fire was the fastest way to pass the word and the clever network of signal towers (tours à signaux) that you see on the high mountain tops around the region did just that.

Originally set up by the Rois de Majorque as a defence system to protect the Roussillon from invaders, information was passed quickly around the region, using fire and smoke signals.

Using smoke during the day and bursts of fire at night, the signals were called ‘farons’ and the ‘faraoner’ was trained to send out precise details of approaching danger.

Smoke signals were black or white, discontinuous or continuous according to the danger. For example, one cloud of smoke might indicate 500 men on foot.

Here are just a few of the towers that made up the Roussillon defence system. Some have been restored, others are in ruins. Many more were dotted around, some of them even privately built by lords and wealthy landowners, wishing to communicate from chateau to tenants. 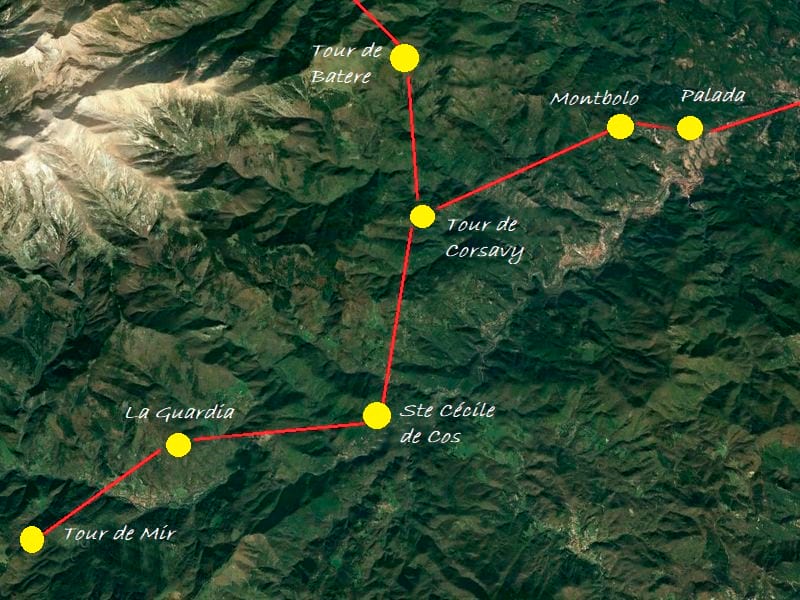 Both the Madeloc and Massane towers monitored enemy activity up and down the coastline, and deep inland too. They transmitted news of imminent danger throughout the Vallespir, to the Château Royal in Collioure and across the Roussillon plain.

The plain also received warnings from the Torre del Far in Tautavel which also informed the Salanque. The tour at Força Réal covered the west of the plain. These 4 towers surrounded the Roussillon plain, and were well placed to inform the population of imminent danger.

In the high Vallespir,  the château of Cabrenç (Serralongue) and the town of Prats-de-Mollo were central warning points, while the Tour de Palalda, linked also to the Tour de Montbolo, sent signals down the valley, to be spotted by Massane and passed on.

The Tour de Corsavy communicated with the Tour de Batère which sent signals to the Têt valley, while the Tour de Cos (ancient tower between Le Tech and Montferrer) signalled the Tour de la Guardia, above Prats-de-Mollo.

Other towers were located at Rasiguères, Amélie-les-Bains, Latour-de-Carol, Laroque-des-Albères, Mascarda near Mosset, Quer Roig above Cerbère, and the towers of En Pagès and  Baille around Banyuls….in fact, wherever elevated positions allowed surveillance of the plain, the valley or the sea.

Most of the towers are accessible, distant and panoramic prizes for some exciting, mostly uphill walks. Find out more about individual towers and walks via the links provided above or on www.les-pyrenees-orientales.com.